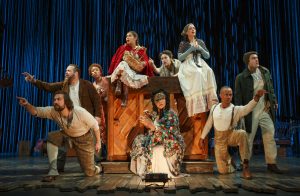 Thick taut ropes stretch across the back of the stage at the Ahmanson Theatre in Los Angeles like a forest of piano wires. Stacks of piano harps scale each side of the stage, framed by a proscenium of keyboards. Sitting center stage, glowing beneath a canopy of shimmering mismatched chandeliers, is an upright piano on a wheeled platform. There might not be a traditional orchestra in Fiasco Theatre’s touring production of Stephen Sondheim and James Lapine’s beloved fairy tale mash-up Into the Woods, but music is clearly front-and-center. 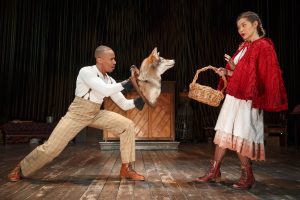 Chatmon as the Wolf menacing Little Red Ridinghood (Lisa Helmi Johanson) in Fiasco Theater’s tour of Into the Woods. PHOTO BY JOAN MARCUS

Scattered around the piano are other treasures such as you might find at your granny’s house: a taxidermied wolf’s head mounted on a plaque, a stately grandfather clock (the better to chime three midnights for you, my dear), old couches and stools. And there are other eclectic musical instruments — a xylophone, a toy piano, a banjo. And, of course, a big bass drum (the better to bang out the giant’s footsteps, my dear.)

But the most crucial element for this pared-down Woods is not any prop or costume or special effect. Nor is it any actor’s impressive ability to juggle multiple characters while playing multiple instruments. It is, instead, the thing that makes any story come alive, makes any reader (or audience member) feel drawn into a whole other world. That very important thing is: Imagination.

Imagination turns a dressmaker’s dummy into an arboreal grave marker, a workshop ladder into an impenetrable tower, and pages of sheet music into a chorus of chattering birds. Imagination is a hallmark for Fiasco, the troupe best known for their inventive productions of Shakespeare and classical theatre. Into the Woods is the company’s first musical.

Fiasco’s original Woods opened in May 2013 at the McCarter Theatre in Princeton, New Jersey, to rave reviews. Over the course of three years it has traveled to San Diego’s Old Globe, to the Roundabout in New York and to the Menier Chocolate Factory in London. Along the way, producing entities Dodgers Theatricals and Networks decided to team up for a touring production of the show. Into the Woods is presently ensconced at the Ahmanson through May 14, 2017.

In 2016, auditions for the road show took an extraordinary eight months. Eventually, Anthony Chatmon II and Darick Pead took over the collection of roles originated for Fiasco by, respectively, co-artistic director Noah Brody (who also co-directed with Ben Steinfeld, and played Lucinda/the Wolf/Cinderella’s Prince) and Andy Grotelueschen (Florinda/Milky White/Rapunzel’s Prince.) Within a week, they were in rehearsals.

“It was a very long process of putting this show together because it is so specific — who plays the bassoon and can be Jack’s mom? et cetera,” explained Chatmon in a recent backstage conversation with Everything Sondheim in Los Angeles. “They were very adamant about finding people they could really work with in the room and create something. So it was different than casting a normal musical.” 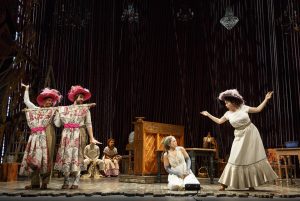 “One of the reasons why I fell in love with musicals is that it’s not just the words, it’s about what the music does to you as well,” said Pead. “I really do think (Sondheim’s music) speaks to the soul, universally.”

But of course, words do matter. They matter a lot.

“In the second act, the characters spend a lot of time talking at each other,” Pead continued. “They don’t really listen and help each other. But as soon as the Baker leaves, has that moment with his father, and comes back, they start working together. And that’s what defeats this giant! I think, in this day and age, we tend to do a lot of talking and not a lot of listening. What this show does for me, politically speaking, is make me wish we could do more listening.”

Chatmon concurred. “(At first,) everyone is so eager to talk about themselves and what they want. Them, them, them, them; me, me, me and what I want, this is what would affect me. ‘You Are Not Alone,‘ is the first real ‘you’ song. Someone else is more important than your problem. The show slows down, takes its real first breath … and then this thing happens and you really start to think about where your head’s been. It’s not that anyone’s wrong. Everyone was right. There was no ‘Your Fault.’ Everyone had an idea. And now it can’t be about just me anymore. Now you have no choice but to be better and do better. It’s a great learning lesson.”

“I agree,” added Pead. “The witch, for example. She’s just the person saying, ‘These are the facts!’ So we sit there and realize, Oh, that’s kind of cold and heartless, but it’s true. It doesn’t mean it’s wrong. And she’s not the bad guy. But we sometimes look at the facts as the bad guy.”

“I feel like when the first act ends, that’s when we graduate college, and we still have the rest of our life to figure out,” Pead said. “Things are good, right? No, folks. Happy ever after is just the starting line of what’s to come for the rest of your life.”

Editor’s Note: The tour of Into the Woods moves to Dallas’s AT&T Performing Arts Center for performances May 16-28. Visit www.intothewoodsontour.com for more information.

TERRI ROBERTS is a freelance theater and entertainment writer in Los Angeles.

Rick Pender, founding editor of Everything Sondheim, has created a brand new, … END_OF_DOCUMENT_TOKEN_TO_BE_REPLACED

“We had the same priorities.  We wanted to take the audience where we wanted to … END_OF_DOCUMENT_TOKEN_TO_BE_REPLACED

In 1997, Stephen Sondheim sat down with Library of Congress Senior Music … END_OF_DOCUMENT_TOKEN_TO_BE_REPLACED

Editor's note: Since the printing of this article, Sondheim is reportedly no … END_OF_DOCUMENT_TOKEN_TO_BE_REPLACED

Isn’t it rich? His career arc stretches from writing the lyrics for West Side … END_OF_DOCUMENT_TOKEN_TO_BE_REPLACED