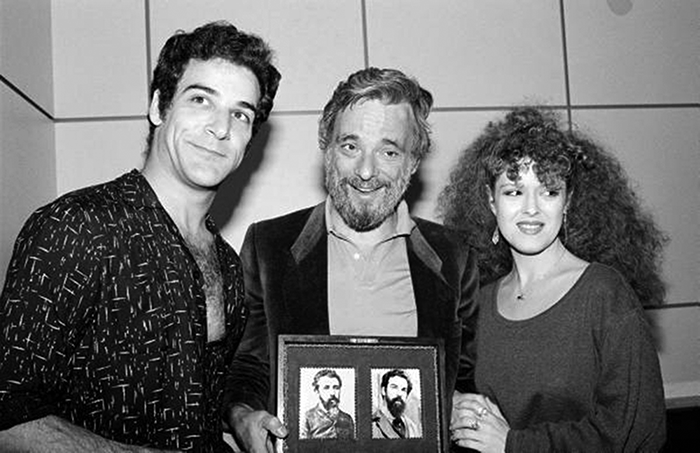 Mandy Patinkin, Stephen Sondheim and Bernadette Peters will be among the many subjects covered on a routine basis by Everything Sondheim.

Executive Editor and Publisher RICK PENDER served as managing editor of The Sondheim Review (TSR) from 2004 to 2015; he began as a contributor to that publication in 1997. A past chair of the American Theatre Critics Association, he covers theatre for Cincinnati CityBeat.

Associate Editor JOSH AUSTIN is the publication/website content editor for Actors’ Equity Association. After earning his master’s degree in arts journalism at Syracuse University he served on TSR’s editorial team from 2013 to 2015.

Associate Editor SAM BALTIMORE has been a lecturer in music history at Towson University and an independent researcher in Washington, DC. He earned his Ph.D. in musicology from UCLA in 2013. He served on TSR’s editorial team from 2014 to 2015.

Associate Editor CHRISTOPHER WEIMER is a professor at Oklahoma State University, where he teaches courses in literature, Western humanities and Spanish. He contributed to TSR between 2007 and 2015.

Art Director SEAN HUGHES teaches photojournalism and digital design at the University of Cincinnati. He served as the art director for Cincinnati CityBeat from 1997 to 2012, and for TSR from 2004 to 2015.

Contributing Editor DIANA CALDERAZZO earned her Ph.D. from the University of Pittsburgh, writing about Sondheim’s music and lyrics. She has been a backstage theater professional, an adjunct university faculty member and a regular contributor to TSR since 2007.

Contributing Editor RUSSELL M. DEMBIN is the production editor of American Theatre magazine and a freelance dramaturg. He served on TSR’s editorial team from 2011 to 2015.

Contributing Editor MARK EDEN HOROWITZ is a senior music specialist at the Library of Congress in Washington, D.C. The author of Sondheim on Music, he was associated with TSR from 2000 to 2015.

Contributing Editor JOHN OLSON works and produces theatre in Chicago, where he writes for TalkinBroadway.com. He began contributing to TSR in 1998 and served on its editorial from 2000 to 2015.

Contributing Editor ANDY PROPST, founder of AmericanTheaterWeb.com, has written for such diverse publications as TSR, The Village Voice and Backstage. He is also the author of You Fascinate Me So: The Life and Times of Cy Coleman.

Contributing Editor PAUL M. PUCCIO is a professor of English at Bloomfield College in New Jersey. He began contributing to TSR in 2001 and became a member of its editorial team in 2006, serving until 2015.

Contributing Editor CHRISTA SKILES is the associate director of marketing and communications for the Cincinnati Playhouse in the Park. She served on TSR’s editorial team from 2005 to 2015.

Contributing Business Consultant JOAN KAUP is the vice president for institutional advancement at the Art Academy of Cincinnati. She has degrees and experience in marketing and entrepreneurship.

Rick Pender, founding editor of Everything Sondheim, has created a brand new, … END_OF_DOCUMENT_TOKEN_TO_BE_REPLACED

“We had the same priorities.  We wanted to take the audience where we wanted to … END_OF_DOCUMENT_TOKEN_TO_BE_REPLACED

In 1997, Stephen Sondheim sat down with Library of Congress Senior Music … END_OF_DOCUMENT_TOKEN_TO_BE_REPLACED

Editor's note: Since the printing of this article, Sondheim is reportedly no … END_OF_DOCUMENT_TOKEN_TO_BE_REPLACED

Isn’t it rich? His career arc stretches from writing the lyrics for West Side … END_OF_DOCUMENT_TOKEN_TO_BE_REPLACED