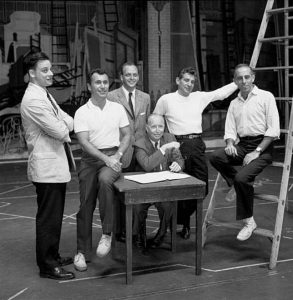 WEST SIDE STORY was Stephen Sondheim’s first foray on a Broadway stage in 1957. He was just 27 when it opened. Already eager to start his Broadway career as a composer and a lyricist, he was convinced by his mentor Oscar Hammerstein to debut as the show’s lyricist, the junior member of a team comprised of three well known artists: composer Leonard Bernstein, director and choreographer Jerome Robbins, and playwright Arthur Laurents. Together they created an innovative musical transposing the framework and action of Shakespeare’s Romeo and Juliet to 1950s New York City. Instead of feuding families, West Side Story’s star-crossed lovers, Tony and Maria, are connected to warring street gangs — the Jets (white teens) and the Sharks (Puerto Ricans).

Act 1 opens with references to its Shakespearean roots, beginning with an angular, jazzy “Prologue” that sets up the rivalry between teenage gangs, the Jets, who are white Americans and the Hispanic Sharks, who are Puerto Ricans. As the gangs vie for control of a neighborhood on New York City’s Upper West Side, they are warned by police to stop fighting. Law enforcement has racist contempt for the Sharks but also sees the Jets as slum “trash” and warns them to settle down.

Instead, the Jets choose to reassert their control of the streets. Riff, the fiery leader, wants to battle the Sharks. He says he will challenge Bernardo, the Sharks’ leader, to a rumble during an upcoming neighborhood dance. He plans to recruit his friend Tony, a former Jet, but others doubt Tony’s loyalty. Riff convinces them (“Jet Song”) that Tony is a “Jet all the way.” Tony, now responsibly employed at Doc’s Drug Store, turns down the invitation. Riff persists, and Tony hesitantly agrees to attend the dance. He optimistically feels an exciting change is headed his way (“Something’s Coming”).

Bernardo’s young sister, Maria, has recently arrived from Puerto Rico for an arranged marriage to her brother’s friend Chino. She works in a bridal shop with Anita, Bernardo’s girlfriend. Maria tells Anita she’s not in love with Chino.

At the dance, gang members participate in a spirited, choreographed competition (“Dance at the Gym”). Just as Romeo and Juliet are enamored at first sight, Tony and Maria meet on the dance floor and quickly fall in love. Bernardo angrily sends Maria home. Riff and Bernardo agree to negotiate the rumble at Doc’s.

Tony, enraptured, finds Maria’s apartment building and sings (“Maria”) outside her bedroom. On her fire escape (instead of Juliet’s balcony), the young lovers 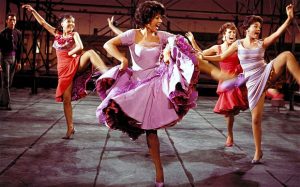 confess their feelings for one another (“Tonight”). Elsewhere, Anita and other Shark girlfriends debate the virtues and shortcomings of Puerto Rico and “America.”

As the Jets wait at Doc’s, Riff urges them to be “Cool.” When the Sharks arrive, Tony convinces everyone to have “a fair fight”—fists only. Bernardo hopes to fight Tony, but settles for Riff’s No. 2, Diesel. Tony tells Doc he’s in love with Maria and believes nothing can go wrong.

The next day, Maria happily anticipates seeing Tony again until Anita tells her about the rumble. When he shows up at the dress shop, Maria convinces him to stop the fight. They imagine their wedding (“One Hand, One Heart”). In the “Tonight Quintet” Tony, Maria, Anita, Bernardo and the Sharks, and Riff and the Jets separately anticipate what the future holds.

The gangs meet under a highway overpass where Bernardo and Diesel begin to fight. Tony tries to intercede. Bernardo ridicules him and becomes infuriated when Tony says he and Maria are in love. Riff steps in when Bernardo attacks Tony. They draw switchblades and fight (“The Rumble”). Tony tries to separate them, unwittingly enabling Bernardo to fatally stab Riff. In a fit of rage, Tony kills Bernardo and an all-out battle ensues. As police approach, everyone scatters except Tony, shocked at the tragic outcome. Anybodys, a tomboy who yearns to be a Jet, urges Tony to flee. Riff and Bernardo’s bodies are all that remain.

Act 2 opens with Maria believing Tony has stopped the rumble. She daydreams with her friends (“I Feel Pretty”). Later Chino tells Maria that Tony has killed Bernardo. She retreats to her bedroom, hoping against hope that it’s a lie. Tony arrives and she greets him with rage, but dissolves in tears since she still loves him. They yearn to go “Somewhere” where they can be free from prejudice.

Elsewhere, two Jets brag about their escape from an inept cop when the gang reassembles. They jeer about the officer and other adults who don’t understand them (“Gee, Officer Krupke”). Anybodys tells the Jets that Chino is hunting for Tony. 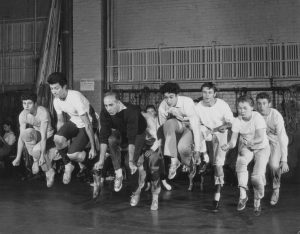 A grieving Anita arrives at Maria’s apartment. Tony flees after he and Maria discuss meeting later at Doc’s store. Seeing Tony depart Anita angerly berates Maria in “A Boy Like That,” but relents when Maria professes her depth of feeling (“I Have a Love”). She tells Maria that Chino intends to gun down Tony. When police arrive to question Maria, she asks Anita to go to Doc’s and tell Tony she will be delayed. Anita agrees and goes to Doc’s, but the Jets, hanging out at the drugstore, brutally harass her. Doc stops them, and the frightened and humiliated Anita spitefully tells the Jets that Chino has shot and killed Maria.

Doc tells Tony that Maria is dead. Tony numbly acts on a death wish, seeking out Chino. At the very moment he sees Maria alive, Chino arrives and shoots Tony. Shocked gang members and adults slowly gather while Maria cradles dying Tony in her arms. More fighting is about to break out, but Maria picks up Chino’s weapon and tells them that they all killed Tony. “Now I can kill, too, because now I have hate!” she exclaims, but she cannot pull the trigger. Instead she drops it and weeps. Slowly members of both gangs surround Tony’s body. As they carry his body away, the feud seems to be over. Brokenhearted Maria trails the procession.

Rick Pender, founding editor of Everything Sondheim, has created a brand new, … END_OF_DOCUMENT_TOKEN_TO_BE_REPLACED

“We had the same priorities.  We wanted to take the audience where we wanted to … END_OF_DOCUMENT_TOKEN_TO_BE_REPLACED

In 1997, Stephen Sondheim sat down with Library of Congress Senior Music … END_OF_DOCUMENT_TOKEN_TO_BE_REPLACED

Editor's note: Since the printing of this article, Sondheim is reportedly no … END_OF_DOCUMENT_TOKEN_TO_BE_REPLACED

Isn’t it rich? His career arc stretches from writing the lyrics for West Side … END_OF_DOCUMENT_TOKEN_TO_BE_REPLACED