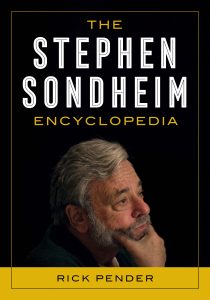 The Stephen Sondheim Encyclopedia is a detailed and comprehensive reference devoted to musical theater’s most prolific and admired composer and lyricist. Entries cover Sondheim’s numerous collaborators—from composers and directors to designers and orchestras—key songs—such as his Academy Award winner “Sooner or Later” (Dick Tracy)—and major works—including Assassins, Company, Follies, Sweeney Todd, and West Side Story. The encyclopedia also contains information about Sondheim’s mentoring by Oscar Hammerstein II and his early collaboration with Leonard Bernstein, and profiles the actors who originated roles and sang Sondheim’s songs for the first time, including Ethel Merman, Angela Lansbury, Mandy Patinkin, and Bernadette Peters.

Everything Sondheim asked Mr. Pender a few questions about the experience.

How did you get involved with the encyclopedia?

After a dozen years editing The Sondheim Review, I was known as a knowledgeable resource about Sondheim. The publisher Rowman & Littlefield asked if I would author an “encyclopedia,” envisioning it to have approximately 300,000 words. I knew there was plenty to be said about Sondheim, and I believed I had the experience and the familiarity to do this. It was a challenging but rewarding task.

What was it like to research and write the book?

Because of my long experience with The Sondheim Review, I was aware of plenty of books and scholarship that I could draw upon, and fully aware of the topics that should be covered. Of course, it was daunting to write about an esteemed artist who is still alive, but Sondheim was gracious and forthcoming whenever I had questions.

Were there any surprises/new things you learned in your research?

Having curated 40+ issues of The Sondheim Review, I was not surprised by much of anything, but I was pleased to have the time to dig deeper into topics small and large — from his script-writing role with the early TV series Topper to rounding up information about his juvenile and unproduced works.

Do you have a favorite Sondheim musical, and if so, why?

My “favorite” tends to shift on a daily basis, and it really depends on the criteria. For charm, it’s A Little Night Music; for power, it’s Sweeney Todd; for ingenuity, Pacific Overtures; for deep understanding of creativity, Sunday in the Park with George, and for sheer clever audacity, it’s Assassins.

The Stephen Sondheim Encyclopedia will be released in April of 2021. 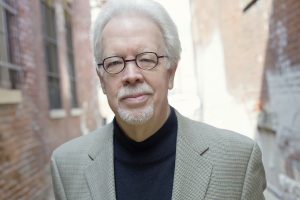 Rick Pender has been an award-winning theater critic since 1986. He has written for CityBeat, Cincinnati’s alternative newsweekly, since it was founded in 1994. He was the newspaper’s arts and entertainment editor and is currently a contributing editor, reviewing local theater productions. In 2002 and again in 2017, the Society of Professional Journalists named him Ohio’s best critic. Pender is past chair of the American Theatre Critics Association and was the executive editor and publisher of Everything Sondheim and managing editor of The Sondheim Review. He was also heard regularly as a broadcast interviewer for WVXU, Cincinnati’s National Public Radio affiliate. Pender has interviewed Stephen Sondheim, onstage and in the studio, several times.

Rick Pender, founding editor of Everything Sondheim, has created a brand new, … END_OF_DOCUMENT_TOKEN_TO_BE_REPLACED

“We had the same priorities.  We wanted to take the audience where we wanted to … END_OF_DOCUMENT_TOKEN_TO_BE_REPLACED

In 1997, Stephen Sondheim sat down with Library of Congress Senior Music … END_OF_DOCUMENT_TOKEN_TO_BE_REPLACED

Editor's note: Since the printing of this article, Sondheim is reportedly no … END_OF_DOCUMENT_TOKEN_TO_BE_REPLACED

Isn’t it rich? His career arc stretches from writing the lyrics for West Side … END_OF_DOCUMENT_TOKEN_TO_BE_REPLACED