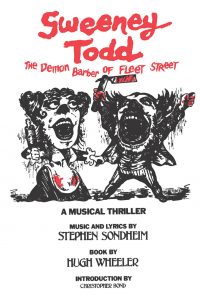 Sweeney Todd, the Demon Barber of Fleet Street was Stephen Sondheim’s tenth Broadway production. It is generally considered his masterpiece, a melodic and theatrically bold work that’s been produced in theaters large and small and numerous opera houses. The original 1979 Broadway production won eight Tony Awards including recognition as the season’s best musical. It has had numerous varied revivals, as well as a 2007 cinematic rendition by Tim Burton starring Johnny Depp as Sweeney.

Creating the musical was Sondheim’s idea, not the suggestion of anyone else. He attended British actor Christopher Bond’s play about the 19th-century serial killer Sweeney Todd and was inspired to turn it into “A Musical Thriller.” He subsequently categorized it as “a dark operetta,” but also called it “a movie for the stage.” It is almost completely underscored: eighty percent of the show is sung, and Sondheim’s melodies play constantly behind the action, especially basic musical themes (called “leitmotifs”) linking character and events. Sondheim’s score paid homage to 20th-century composer Bernard Herrmann’s compositions for melodramatic films in the 1940s and 1950s. 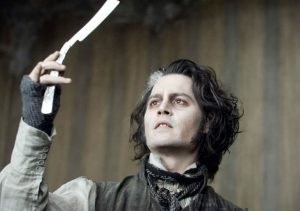 Johnny Depp in the movie adaptation of “Sweeney Todd”

Sondheim envisioned Sweeney Todd in a small, dark theater where audiences would be terrified. Producer and director Harold Prince persuaded Sondheim to expand it on Broadway into an epic condemnation of dehumanized society crushed by the Industrial Revolution. That production was not what Sondheim had in mind, but numerous revivals and reconsidered productions have proved its exceptional emotional power regardless of the specifics of size, scale, and scope. The show is also noteworthy for its macabre, dark humor.

Accompanied by sepulchral organ music and a jarring factory whistle, the story opens with a chorus the citizens of London inviting the audience to witness the gruesome story of the “demon barber” (“The Ballad of Sweeney Todd”). 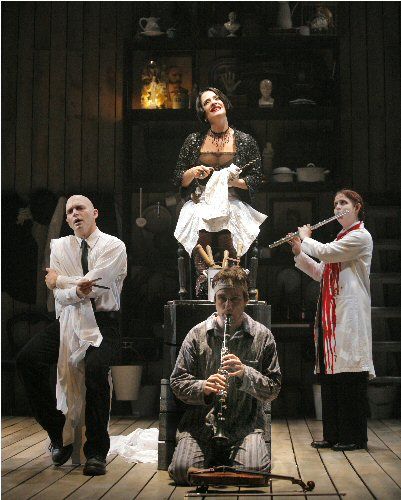 Anthony Hope, a young sailor, and Sweeney Todd arrive at the London docks in 1846. Anthony is happy to be home, but Sweeney, while grateful to the young man for saving his life at sea, is full of grim irony (“No Place Like London”). A ragged Beggar Woman pleads for money and offers sexual favors before they send her away. Sweeney tells Anthony that an immoral judge wrongfully transported him to Australia on petty charges so he could seduce Sweeney’s pretty young wife Lucy (“The Barber and His Wife”).

Sweeney enters Mrs. Lovett’s unsanitary pie shop on Fleet Street. She offers him a sample, acknowledging its lack of appeal (“The Worst Pies in London”). He wants to rent her upstairs room, unused since Benjamin Barker—Sweeney’s actual name—was banished to Australia. She describes how Judge Turpin and his court assistant, the Beadle Banford, took Lucy to a party, got her drunk, and raped her during a masked ball (“Poor Thing”). Sweeney’s anguish reveals his true identity to Mrs. Lovett. She says Lucy took poison and the Judge now has their daughter Johanna as his ward. Sweeney swears vengeance. Mrs. Lovett has stored his razors; he is manically thrilled to hold them again (“My Friends”).

Anthony sees Johanna in a window at Turpin’s mansion when she calls out to a bird seller (“Green Finch and Linnet Bird”). He instantly falls in love (“Ah, Miss”). The Beggar Woman warns him about trespassing, but he is smitten and buys a bird for Johanna (“Johanna”). The Judge orders him away, and the Beadle strangles the bird.

Judge Turpin lusts after his innocent ward (“Johanna”) and plans to marry her. Sweeney is impatient for retribution; Mrs. Lovett restrains him (“Wait”). 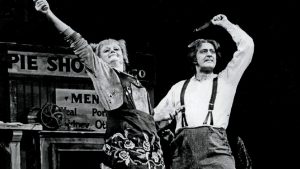 Angela Lansbury and Len Cariou in the original Broadway production

Later Anthony asks Sweeney to help free Johanna from the judge. Pirelli, who reveals himself to have been Benjamin Barker’s apprentice, visits and threatens to reveal Sweeney’s true identity. They fight and Sweeney kills him, stuffing his body in a trunk (“Pirelli’s Death”).

Anthony proposes to Johanna (“Kiss Me”) and she breathlessly accepts.. The Beadle urges the judge to be better groomed (“Ladies in Their Sensitivities”), suggesting a visit to Sweeney’s shop. Sweeney prepares to slit Turpin’s throat, savoring the moment before his revenge, while the judge lasciviously imagines his future with Johanna (“Pretty Women”). Anthony bursts in and inadvertently reveals his planned elopement, causing Turpin to storm out. Enraged by the missed opportunity, Sweeney’s pledges to murder indiscriminately (“Epiphany”). Mrs. Lovett proposes to use the victims for her meat pies. Sweeney admires her ingenuity, and they celebrate with black humor (“A Little Priest”).

Mrs. Lovett’s pies are spectacularly popular (“God, That’s Good!”). Sweeney acquires a barber chair that can send victims down a chute to the bake house’s basement where a grinding machine awaits. The pace of murder accelerates. Anthony learns Turpin has sent Johanna to a lunatic asylum to keep her from him. Mrs. Lovett tries to calm Sweeney with her dream of married life (“By the Sea”). The Beggar Woman is alarmed by strange odors and smoke from the bake house. 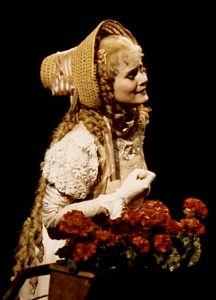 Sarah Rice as Joanna in the original Broadway production

Sweeney helps Anthony pose as a wigmaker in order to enter the asylum where inmates’ hair is shorn and sold. The barber writes to Turpin that Johanna will soon be hidden at his shop (“The Letter”).

Toby, taken in by Mrs. Lovett after Pirelli’s death, is suspicious of Sweeney and frets about Mrs. Lovett’s safety (“Not While I’m Around”). He recognizes Pirelli’s purse and realizes she is guilty, too. She takes him to the cellar to teach him to grind meat for pies, locking him in. The Beadle investigates complaints about foul smells; she offers him a free shave from Sweeney. When the Beadle’s body comes down the chute, Toby’s fears are confirmed.

Anthony’s rescue plan breaks down; Johanna takes his gun and kills the asylum director (“City on Fire”). They come to the barbershop with her disguised as a sailor; Anthony leaves to seek a coach while she hides in Sweeney’s trunk. The Beggar Woman warns Sweeney about Mrs. Lovett’s duplicity; he rewards her slitting her throat.

Having convinced Turpin that Johanna longs to return, Sweeney offers him a shave. Revealing himself to be Benjamin Barker, he slits the judge’s throat (“The Judge’s Return”).

Johanna emerges from the trunk and narrowly escapes Sweeney’s wrath. He descends to the bake house where Mrs. Lovett is trying to extinguish the almost-dead judge. Sweeney realizes that the Beggar Woman is Lucy, his wife, and that Mrs. Lovett has deceived him. He feigns forgiveness, embracing her, then forces her into the oven. He cradles Lucy’s body. Toby, his hair gone white from shock, fear, and mayhem, comes from behind Sweeney with the razor and cuts the barber’s own throat. Constables, Anthony, and Johanna arrive and witness the carnage.

The citizens of London sing that revenge begets revenge. Sweeney rises from the grave, glares at the audience malevolently then slams the oven door (accompanied by a reprise of “The Ballad of Sweeney Todd”).

Rick Pender, founding editor of Everything Sondheim, has created a brand new, … END_OF_DOCUMENT_TOKEN_TO_BE_REPLACED

“We had the same priorities.  We wanted to take the audience where we wanted to … END_OF_DOCUMENT_TOKEN_TO_BE_REPLACED

In 1997, Stephen Sondheim sat down with Library of Congress Senior Music … END_OF_DOCUMENT_TOKEN_TO_BE_REPLACED

Editor's note: Since the printing of this article, Sondheim is reportedly no … END_OF_DOCUMENT_TOKEN_TO_BE_REPLACED

Isn’t it rich? His career arc stretches from writing the lyrics for West Side … END_OF_DOCUMENT_TOKEN_TO_BE_REPLACED