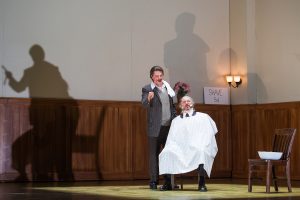 So is it a musical or an opera? One might have expected Sweeney Todd at the Glimmerglass Festival to come down firmly on the side of the latter. But, to borrow a thought from Into the Woods, this summer’s production lived in between.

Glimmerglass, the summer opera festival in Cooperstown, New York, presented 12 performances of Sweeney from July 9 to Aug. 26. It was the festival’s first Sondheim, unless you count last year’s Candide, a show that Sondheim provided additional lyrics for the 1974 Broadway revival. Glimmerglass is well known for its Young Artists Program, and five featured players in Sweeney were so designated in the program. While there were no Big Names, the cast made a respectable, if uneven, effort.

Christopher Alden’s stark, modernized production would not have felt out of place at New York City Opera in its last few years (although that company’s 2004 staging was much more literal than stylized). At curtain, the audience was greeted — or perhaps haunted is a better word — by a lone figure in a chair, facing upstage into a black void. Toby, perhaps, looking back at a series of unfortunate events from Fogg’s Asylum?

But no. The void gave way to what looked like a brightly lit English parish hall of a bygone decade, somewhere from the 1950s to the early ’70s, with Union Jacks strung overhead; high, windowless white walls; a harmonium; and a bake sale in progress. As the parishioners began putting on bits and pieces of Victorian costumes from a wheeled-in coat rack, that lone figure was revealed to be Sweeney himself (Greer Grimsley). The sunglasses he wore in “No Place Like London” telegraphed his dark vision.

One by one, other characters gradually took shape. The bag lady of the parish hall morphed into the Beggar Woman (Patricia Schuman). Just as seamlessly, Emily Pogorelc, in a short magenta skirt with sheer cape to match, transformed straight from Lucy Barker in “Poor Thing” into her grown daughter, Johanna, in “Green Finch and Linnet Bird.” The woman in the teal waitress uniform presiding over the bake sale was, of course, Mrs. Lovett.

Alden made clever use of the dozen ensemble members. In the opening number, it was forks rather than razors that they swung high, then ominously clinked on pie plates. In “My Friends,” they formed a cordon across the stage, passing the box containing the razors down the line with admiring faces, until it reached Sweeney. He was positioned too far to the side for his giant shadow on the wall behind him to make full impact — a missed opportunity for a device that worked better later in spots such as “Pretty Women.” But too much of the staging brought to mind the long-ago Forbidden Broadway parody of Grand Hotel: “People come, people go, people move chairs.”

By Act II, both Sweeney’s barbershop and Mrs. Lovett’s pie shop had gone upscale, with porcelain fixtures, patterned pink wallpaper and designer logos. But the white walls had also begun to fracture into smaller panels suitable for tossing a bucketful of blood onto for each of Sweeney’s victims — this production’s answer to the spattered white jackets in John Doyle’s Broadway revival. Bodies did not drop from Sweeney’s stage-level chair but merely slumped in it; the first, Pirelli’s, memorably rolled offstage with a kick from Mrs. Lovett.

Grimsley brought to the role of Sweeney his strong bass-baritone, a fitting gravitas and, not least for a New Orleans native, authentic-sounding British O sounds. His acting was big and dramatic enough to dominate an opera stage. Peter Volpe as Judge Turpin matched him well in “Pretty Women,” each embodying evil in his own way.

Molly Jane Hill, the Young Artist who was a last-minute substitute for Luretta Bybee as Mrs. Lovett on July 30, seemed, in fact, too youthful for the role. Hill was at her best vocally in “Wait” and comically in “By the Sea,” stepping out of a flounced white robe in her striped bathers as if she were Bernadette Peters fleeing Dot’s dress in Sunday in the Park With George.

The full orchestra, conducted by John DeMain, sounded smooth as silver in lyrical passages including Anthony’s “Johanna” and “My Friends.” But at times it overpowered the singers, not because it was too loud, but because their voices, while mostly operatic, were often tentative or simply not strong enough. Nicholas Nestorak as Toby, first seen in a Prince Valiant wig and a rainbow-striped suit, sang with a vibrato that some in the audience found annoying, but he nailed “Not While I’m Around.” Schuman sang, appropriately enough for the damaged Beggar Woman, in two completely different voices: operatic and scratchy.

Rounding out the lead cast were Christopher Bozeka playing Pirelli as Liberace, flourishing an oversize white cape in a wardrobe heavy on flashing sequins; Harry Greenleaf as Anthony; and Bille Bruley as the Beadle.

Too often, visuals undercut musical values. During “Green Finch and Linnet Bird,” three actors sat stage left wearing bird’s-head masks and making twitchy movements, distracting from the beauty of the song. “A Little Priest” moved from the pie shop onto an English music hall stage, with Sweeney and Mrs. Lovett donning pearly jackets and finishing the number in front of a curtain advertising their businesses. Perhaps that transition was too much; Grimsley and Hill never let loose, and the song failed to build into the show-stopper it needs to be.

In fact, the energy level was oddly low through much of the show. A rare exception was Grimsley’s “Epiphany,” in which his passion and commitment pointed up what was missing elsewhere. Missing, that is, until the rousing finale. Only then did the show’s message become as compelling as Sondheim’s music.

The Glimmerglass Sweeney Todd is to be broadcast on Oct. 29 on New York City’s classical music station WQXR, 105.9 FM, online at wqxr.org, and distributed nationally by the WFMT Radio Network, wfmt.com.

Rick Pender, founding editor of Everything Sondheim, has created a brand new, … END_OF_DOCUMENT_TOKEN_TO_BE_REPLACED

“We had the same priorities.  We wanted to take the audience where we wanted to … END_OF_DOCUMENT_TOKEN_TO_BE_REPLACED

In 1997, Stephen Sondheim sat down with Library of Congress Senior Music … END_OF_DOCUMENT_TOKEN_TO_BE_REPLACED

Editor's note: Since the printing of this article, Sondheim is reportedly no … END_OF_DOCUMENT_TOKEN_TO_BE_REPLACED

Isn’t it rich? His career arc stretches from writing the lyrics for West Side … END_OF_DOCUMENT_TOKEN_TO_BE_REPLACED