"If You Really Love Me, You Would Do This"
REVIEW BY DAVID LEVY 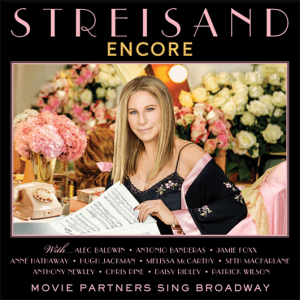 It’s hard to listen to Barbra Streisand’s latest album, Encore: Movie Partners Sing Broadway, without comparing it to her two previous Broadway albums. The liner notes explicitly link her choices of Sondheim material to past successes, dubbing her “the foremost interpreter of his songs” on the strength of her recordings of “Send in the Clowns,” “Putting It Together,” “Children Will Listen,” “Being Alive” and “Not While I’m Around.”

While that statement could be debated for eons to come, it’s not hard to argue that Barbra Streisand’s recording of “Putting It Together,” which opened 1985’s The Broadway Album, is a masterpiece. Despite having somehow never recorded any Sondheim up to that point — not even a hit from West Side Story — Streisand loaded her Broadway disc with eight songs from his catalog.

For “Putting It Together,” Streisand excavated a brilliant pop song from within a much longer sung scene in Sunday in the Park with George, giving it new dramatic context through original dialogue about Barbra’s own project du jour (the very album the song would open) and a few rewritten lines by Sondheim himself. Its synthesizer-heavy orchestration was both reflective of the song’s original sound and perfect for the Adult Contemporary Pop milieu of Streisand’s 1980s output. It’s not hard to understand why she might want to revisit the elements that made this recording special.

And so, Encore too features a wealth of Sondheim material, and like “Putting It Together,” the songs on Encore are re-contextualized with dialogue (although for the most part, Streisand and her co-producer Walter Afanasieff have left the heavy synths behind). While the genius of “Putting It Together” involved finding a pop number from within a sung scene, for Encores Streisand endeavors to embrace the cast album origins of these songs, crafting miniature dramas from each track.

How you will feel about the result will largely depend on how you feel about Streisand … and how you feel about camp. It’s hard not to miss Streisand’s now-deceased past collaborators, producer Mike Berniker and arranger Peter Matz. Afanasieff skillfully executes both jobs, but it’s hard to shake the feeling that he serves at the pleasure of La Streisand. There are a lot of great ideas embedded in this album, but almost every element, from vocals to arrangements to dialogue to casting to packaging leaves one wishing someone had been capable of saying “no” to the star.

Take “Loving You,” the first Sondheim number on the disc, sung with Patrick Wilson. The orchestration is lush and romantic without becoming soupy, and dialogue is kept to a tasteful minimum. Wilson sounds like the perfect choice for the song; one could easily picture him playing Giorgio in Passion. But the duet devolves into a display of vocal acrobatics wholly inappropriate for the song, particularly when Streisand’s stated project is to get to the heart of the dramatic situations inherent in her selections. (And honestly, if you wanted riffing and melisma, would Patrick Wilson be on your short list?)

“The Best Thing That Ever Has Happened” from Road Show comes similarly close to perfection, but it gets derailed in a totally different way. Alec Baldwin, although an unlikely choice for a duet partner, proves to have the perfect playboy attitude and just enough of a voice to embody the spirit of the Mizners. One might be able to forgive Streisand rewriting the song’s verse as dialogue or the schmaltzy, Vegas arrangement (there are background singers doing “oo-wahs!” like they’re the ghost of Karen Carpenter), but both together tip this song just past the border of good taste.

Streisand previously transformed Evening Primrose’s “I Remember” into a Christmas song, so it should not be entirely surprising that she returned to that show’s score to sing “Take Me to the World.” (Remember how she dropped “I Know Him So Well” from the original Broadway Album because Chess had not yet played the main stem? Streisand’s interpretation of the rules has loosened significantly in the past 30 years.) Joined by Antonio Banderas, Streisand lets loose her powerhouse belt in a manner that would be thrilling were it not for the new and unwelcome harmonies introduced — and for the mix strongly favoring Streisand’s harmony over Banderas’s melody line, a sin committed against more than a few of her duet companions throughout the album.

The deluxe edition of the album — exclusive to Target in the United States, generally available elsewhere — comes with four bonus tracks, including two of Sondheim’s best: “Losing My Mind” and “Not A Day Goes By.” These feature neither duet partners nor dialogue, and consequently far outshine the other songs on the album. Streisand gives an understated reading of “Losing My Mind,” allowing both the orchestra and her own performance to grow with the song’s natural build and then pulling back for a restrained, uncertain resolution. If this is her audition to play Sally in the film version of Follies, tell me where to buy a ticket.

For “Not A Day Goes By,” she made the unconventional choice of performing the more optimistic second act version of the song, a torch song of hopeful longing rather than anguished defeat. Accordingly, she allows the song to build achingly without giving in to the temptation to full-throat belt, and the song is better for it.

Lest you think I don’t love this album, I refer you back to my comment on camp. I love camp, and this is Grade A USDA Pure. The gulf between the seriousness of purpose evident in Streisand’s every syllable and the resulting ridiculousness is deep — and there’s nowhere I’d rather swim. In the middle of “Take Me to The World,” she tells Banderas, “If you really love me, you would do this,” and you can imagine that conversation happening between the star and her guests each time she presented them with her concept and dialogue. But she might as well be exhorting her fans to follow her down this bizarre rabbit hole of a concept. Lead on, my diva. As the song ends, she whispers “Thank you, my love,” and you know she’s speaking to each and every one of us.

DAVID LEVY (@itsdlevy) is a freelance writer in Brooklyn, New York. He is responsible for, among other things, the Fuck Yeah Stephen Sondheim Tumblr and the annual cabaret celebration Sondheimas.

Rick Pender, founding editor of Everything Sondheim, has created a brand new, … END_OF_DOCUMENT_TOKEN_TO_BE_REPLACED

“We had the same priorities.  We wanted to take the audience where we wanted to … END_OF_DOCUMENT_TOKEN_TO_BE_REPLACED

In 1997, Stephen Sondheim sat down with Library of Congress Senior Music … END_OF_DOCUMENT_TOKEN_TO_BE_REPLACED

Editor's note: Since the printing of this article, Sondheim is reportedly no … END_OF_DOCUMENT_TOKEN_TO_BE_REPLACED

Isn’t it rich? His career arc stretches from writing the lyrics for West Side … END_OF_DOCUMENT_TOKEN_TO_BE_REPLACED