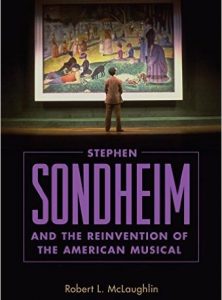 Like many Stephen Sondheim fans, author Robert L. McLaughlin discovered Sondheim’s musical work when he found a cast album (in his case, Company) at the library while in high school. McLaughlin, now an English professor at Illinois State University, was inspired to act in college and beyond because of his interest in Sondheim: “Seventeen years after my last college performance, after earning my graduate degrees, after moving to central Illinois, after pretty much ensuring my tenure, I auditioned for a local community theater’s production of A Little Night Music simply because I’d never had the chance to be in a Sondheim musical. I’ve been in several more of his musicals since. My point here is that, while my academic interests have focused on postmodern literature, my interest in and love for the musical theater and for Stephen Sondheim’s words and music have never been far in the background. In fact, over the years I’ve thought more and more about the connections between the two —postmodern literature and Sondheim’s work.”

McLaughlin’s new volume, Stephen Sondheim and the Reinvention of the American Musical (University Press of Mississippi), is an attempt to interpret Sondheim’s career through postmodern analysis. The book is heavy on jargon, but also on insight into why Sondheim’s musicals continue to resonate.

Of Company, regarded as the first “concept musical,” McLaughlin notes that its seemingly plotless story is a hallmark of postmodernism: “To escape totalizing narrative structure, to escape it even incompletely or at least to escape its claims to absolute truth, is a kind of liberation. It gives us the critical distance we need to examine the basis for our culture’s assumptions and beliefs. It offers us the possibility of discovering different kinds of knowledge, meaning and ways of being … Many of the scenes and songs could be put into a different order without affecting our understanding of the play or the characters. In this sense, Company reminds us more of a revue than of a Rodgers-and-Hammerstein-style book musical, what Sondheim calls a ‘twilight-zone revue.’”

McLaughlin writes that the five subsequent Sondheim/Harold Prince collaborations, “coinciding with the high point of cultural postmodernism … formally and thematically break down conventional epistemological systems and open up new possibilities for meaning.” He singles out young and old versions of a character simultaneously onstage in Follies and Pacific Overtures as examples of postmodern theatrical visuals.

McLaughlin has clearly done his homework. Herbie’s offhand remark in Gypsy that Rose “looked like a pioneer woman without a frontier” leads to a brief explanation of 19th-century historian Frederick Jackson Turner’s frontier thesis. His Into the Woods analysis acknowledges the well-documented pull Bruno Bettleheim’s The Uses of Enchantment had upon the plot, but McLaughlin also discusses the musical’s debt to French psychoanalyst Jacques Lacan and his theories on child psychology. McLaughlin introduces Lacan’s Law of the Father, in which “[the] children’s relationships with the mother is interrupted by the presence of the father, who brings rules and codes that they must learn to live by, limiting freedom and encouraging social conformity.” McLaughlin then describes how the song “Giants in the Sky” illustrates that tension: “Jack is left ambivalent, wishing he ‘could live in between’ the realm of the giants and home, childhood and adulthood, the backward-looking narrative of desire for past holistic unity and the forward-moving narrative desire for the future.”

The book closes with McLaughlin briefly evaluating contemporary, non-Sondheim musicals through a postmodern lens, particularly the way 21st-century hits such as The Producers, [title of show] and Spamalot use self-referential dialogue and songs “for easy laughs,” while other shows including Spring Awakening and Hamilton “made startling use of form … [bringing] popular contemporary music to bear on historical subjects.”

As opposed to general-interest Sondheim books by Craig Zadan, Joanne Gordon or Martin Gottfried, Stephen Sondheim and the Reinvention of the American Musical is aimed at the academic market and will likely become a standard text in undergraduate and graduate theater courses. Anybody seeking a breezy recounting of Sondheim’s musicals or theatrical anecdotes is likely to be disappointed. However, even a lay audience will appreciate McLaughlin’s ability to place Sondheim’s work within a larger cultural context and will recognize the author’s enthusiasm for the subject.

ANDREW MILNER has been writing about Sondheim for more than a decade. He regularly contributed to the Philadelphia City Paper from 1995 until its closure in October 2015.

Rick Pender, founding editor of Everything Sondheim, has created a brand new, … END_OF_DOCUMENT_TOKEN_TO_BE_REPLACED

“We had the same priorities.  We wanted to take the audience where we wanted to … END_OF_DOCUMENT_TOKEN_TO_BE_REPLACED

In 1997, Stephen Sondheim sat down with Library of Congress Senior Music … END_OF_DOCUMENT_TOKEN_TO_BE_REPLACED

Editor's note: Since the printing of this article, Sondheim is reportedly no … END_OF_DOCUMENT_TOKEN_TO_BE_REPLACED

Isn’t it rich? His career arc stretches from writing the lyrics for West Side … END_OF_DOCUMENT_TOKEN_TO_BE_REPLACED