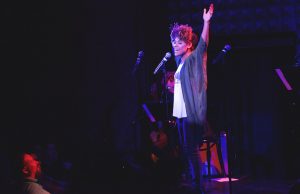 What would you expect when fans have been known to refer to their favorite composer and lyricist (who wrote a song about it) as God? The Sondheimas Mixtape at the Public Theater in Manhattan on March 20, 2017, was an Advent calendar of treats two nights before Stephen Sondheim’s 87th birthday.

A dozen or so soloists, instrumentalists and members of the Andrei Strizek Singers crowded the tiny corner stage of Joe’s Pub to pay tribute to Sondheim with his own songs, politically pointed parodies and surprisingly difficult trivia contests, with DVDs of the HBO documentary “Six by Sondheim” as presents for the winners. 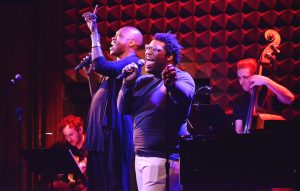 The hourlong revue, now in its fourth year, mixed and mashed Sondheim songs and others, including one by that other Broadway composer born on March 22. Among the standouts: A medley titled “SondTime” carried Scott Montgomery, Jill Paice and Alyson Leigh Rosenfeld through a meditation on time, from “Perpetual Anticipation” to “Remember” by way of “Waiting Around for the Girls Upstairs,” “The Last Midnight” and a beautifully sung trio of “Finishing the Hat,” “Not a Day Goes By” and “I Remember.” Michael R. Jackson sashayed his way through “I’m Still Here,” rewritten from the perspective of “a black starving artist.” James Jackson Jr. and Larry Owens gave a slow, sexy yet still funny “You Could Drive a Person Crazy.” “Into the Fun Home,” sung by Amy Jo Jackson, conflated the wolf and the lady giant from “Into the Woods” into Joan of “Changing My Major,” from Jeanine Tesori and Lisa Kron’s “Fun Home.”

But the opening number’s medley from “Anyone Can Whistle” could have stood on its own without the blatant Donald-and-Hillary references. Isn’t that what the timelessness of Sondheim is supposed to save us from?

Rick Pender, founding editor of Everything Sondheim, has created a brand new, … END_OF_DOCUMENT_TOKEN_TO_BE_REPLACED

“We had the same priorities.  We wanted to take the audience where we wanted to … END_OF_DOCUMENT_TOKEN_TO_BE_REPLACED

In 1997, Stephen Sondheim sat down with Library of Congress Senior Music … END_OF_DOCUMENT_TOKEN_TO_BE_REPLACED

Editor's note: Since the printing of this article, Sondheim is reportedly no … END_OF_DOCUMENT_TOKEN_TO_BE_REPLACED

Isn’t it rich? His career arc stretches from writing the lyrics for West Side … END_OF_DOCUMENT_TOKEN_TO_BE_REPLACED