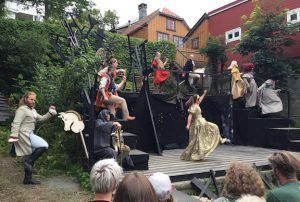 The cast of Fårrå te skogs (Into the Woods) at Rabarbrateateret (The Rhubarb Theatre) in Trondheim, Norway, during July and August 2016. Photo provided by Rabarbrateateret

Rabarbrateateret (“The Rhubarb Theater”) is a theater company situated in the idyllic “old town” Bakklandet in Trondheim, Norway’s third largest city. The company has mounted acclaimed productions of Waiting for Godot and A Midsummer Night’s Dream, among others. Their first Sondheim show was an intimate Sweeney Todd, played in about four square meters in the pub Antikvariatet. With one chair and random books as props, it was a great success.

Their second Sondheim show, Into the Woods, was renamed Fårrå te skogs in Norwegian and played outdoors in a secluded backyard garden. Surrounded by garden plants and the ambient sounds of the town, it was a highly atmospheric place to perform a musical. The audience was welcomed by an invitation to take as many pictures as they wished to spread the word, as Rabarbrateteret could afford little advertising. Limited economic resources were not so much an obstacle as a prerequisite condition for the inventive stage and witty costume designs.

A scaffold scattered with some planks served as a combined shelter for the musicians and set piece for all of the locations, as clever and evocative tricks provided the transformation from the village to the woods. A kick of a table and the rearrangement of some plank heaps made the Giantess’s trampling through the village come alive in an impressively simple way.

The text has been meticulously translated into the local dialect (Inntrøndersk) by Tor Ivar Hagen. The common Norwegian language has longer words than English. In addition to the overall challenges of translation, it is therefore difficult to fit as many words into each line as in the original language. Consequently meaning is often sacrificed. A special trait of Inntrøndersk is that many words are cut short, leaving space for more words in each line. Inntrøndersk also proved to be an expressive language for singing, making it an ideal choice for Sondheim’s lyrics.

It is perhaps difficult to grasp how much funnier “brun pappku” sounds in Norwegian than “brown cardboard cow” sounds in English.

The translator, Hagen, also directed the show. To match the rustic feeling of the dialect, he gave Fårrå te skogs the laidback attitude Norwegians associate with the district of Trøndelag. In a distinctive way it captured the deadpan humor that characterized the original Broadway direction, an obvious inspiration.

Often when one attends musicals in Norway, one gets the feeling that the company doesn’t trust the material or the audience. It was thrilling to experience no trace of such insecurity here. The most intricate jokes remained intact and were performed with confidence that the audience would get them. As a consequence, they did.

All of the actors deserve praise. Not everyone had a trained singing voice, yet each soared effortlessly in the unamplified outdoor conditions. What some lacked in vocal excellence, they compensated with convincing acting skills.

Ståle Tørring, whose Baker was the emotional center of the production, had a sonorous voice, and his acting was nuanced. Together with the Mysterious Man, Stian Pedersen, their “No More” was rapturous. The Witch, played by Kathrine Vevang, used her commanding voice to establish unquestioned authority among the characters. Silje Botten’s detailed acting made her Baker’s Wife a worthy descendant of Joanna Gleason’s interpretation of the character, without being a carbon copy.

The rest of the ensemble proved more than able. Vilde Søyland’s facial expressions of displeasure as Little Red were priceless. Ingrid Lode as Cinderella made her confrontation with her Prince one of the highlights of the show, while Jon Hovdal as Jack had no problem getting the audience to accept the silly prop of Milky White as a real cow — and that his feelings for her were genuine. Cengiz Nereid — tripling as a slimy Wolf, Cinderella’s pompous Prince and a comic Giantess — had ample opportunity to make an impression.

The production bore the marks of affection and dedication, with the actors jovially mingling among the audience during intermission.

The immigrant crisis and the terrorist attacks in Europe dominated public debate in Norway this year. Whether intended or not, this gave resonance to the Giantess’s attack and to the reactions of the characters in the second act. It was not comfortable being reminded that a Giantess is also a person. Yet the association was handled with subtlety, avoiding preachiness.

One quibble with the direction is that actually seeing an actor playing the Giantess was superfluous. Her voice booming over the audience was enough to evoke her presence. Watching her peck out her own eyes with comic birds on sticks was hilarious, but it somewhat diminished the ambiguity of the situation.

In a recent interview with the Guardian, Sondheim explained that he believes that one purpose of theater is to dramatize ideas and make them human. Rabarbrateateret’s ambition was to explore the ideas of collective consciousness and responsibility: How to be a fellow human and how to cope with the seemingly impossible? With their topical and relatable approach they succeeded splendidly.

It was an ideal and an idealistic interpretation of Sondheim and James Lapine’s Into the Woods, an interpretation which made one proud to be a Sondheim aficionado and proud to live in a city with people as talented as this production demonstrated.

Rick Pender, founding editor of Everything Sondheim, has created a brand new, … END_OF_DOCUMENT_TOKEN_TO_BE_REPLACED

“We had the same priorities.  We wanted to take the audience where we wanted to … END_OF_DOCUMENT_TOKEN_TO_BE_REPLACED

In 1997, Stephen Sondheim sat down with Library of Congress Senior Music … END_OF_DOCUMENT_TOKEN_TO_BE_REPLACED

Editor's note: Since the printing of this article, Sondheim is reportedly no … END_OF_DOCUMENT_TOKEN_TO_BE_REPLACED

Isn’t it rich? His career arc stretches from writing the lyrics for West Side … END_OF_DOCUMENT_TOKEN_TO_BE_REPLACED