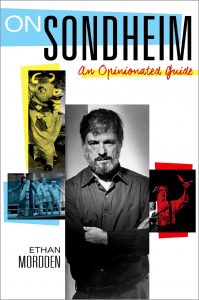 en’s On Sondheim (Oxford University Press, 2016) is indeed an opinionated guide. It also happens to be thorough and authoritative, despite Mordden’s protestation in the preface’s first sentence that he doesn’t intend the book as a reference work. While it isn’t an extensive biography, it is a delightful work that places Sondheim and his musical contributions in the larger context of the evolution of musical theater.

Mordden introduces the reader early on to Harold Bloom’s updated concept of the progression of human events, placing art of the 20th century and onward squarely in the Chaotic Age with Sondheim as its exemplar. Consider the relative chaos of Sondheim and his collaborators’ work: the non-linear Company, the backward tick-tocking of Merrily We Roll Along, the layering of present on past in Follies, and so on. If exploding time is a hallmark of the Chaotic Age, Sondheim and his collaborators have perfected the art. In doing this, Mordden argues, Sondheim evolved the musical into an art form concerned less with charm and more with big ideas, specific characters and the human condition.

However, audiences don’t get used to an expanded art form overnight, and Mordden takes pains to illustrate just how groundbreaking Sondheim’s work was (and remains) in light of what had come before and what was happening contemporaneously. He details an anecdote of a businessman walking out of West Side Story during the opening number and surmises the lighthearted poster prepared him for a “legs and laffs” production, not a balletic study of gang warfare in New York. Sondheim thought his career was over.

But as Mordden points out — with 20/20 hindsight — reactions to Sondheim’s musicals follow a predictable arc: “the original staging lasts somewhat over a year and loses money, but the show keeps getting done more or less everywhere and eventually becomes a classic.” He proposes that Sondheim’s work is simply a lot to take in after only one hearing (“there’s so much there in them”).

Mordden divides Sondheim’s output into three periods — his collaborations with other composers, his Hal Prince spectaculars and his more focused productions, often with James Lapine — and details his development as a composer and lyricist as well as the impact of his neighbor, mentor and surrogate father, Oscar Hammerstein II. Each chapter is a little different in focus, and Mordden seizes the open-endedness of his book to move fluidly among Sondheim’s musicals and other classics, progressing in one sentence from Oklahoma! to Guys and Dolls to Company. On Sondheim is an academic playground, serious and studied in its foundations but reverent and excited in tone and execution.

While Mordden covers each of Sondheim’s musicals and his contributions to film and television, it’s clear which of the composer’s projects Mordden prefers based on chapter length. Follies merits nine pages while Into the Woods garners only four. Readers might be disappointed with the brevity of some chapters, but they simply underscore that this guide is “opinionated.” In the longer chapters about Follies and A Little Night Music, Mordden earns the spilled ink with character analysis and a dissection of each work’s genesis. His chapter on Follies centers on the ill-fated pairs of Ben and Phyllis and Buddy and Sally, exploring their motivations and actions with rigor:

Halfway through the show, the older Ben sings the love song “Too Many Mornings” to her — both of her, Sally and her ghost. Because it’s really the Young Sally that he wants, even now. The older Sally is as ruined as he is. Yet she’s the only Sally there “is.”

In his look at A Little Night Music, Mordden focuses equally on the work’s initial inspiration — Jean Anouilh’s play L’Invitation au château — and its ultimate source, Ingmar Bergman’s Smiles of a Summer Night. He thoroughly compares the musical with its source material, critiquing how changes strengthen or stray from the central thesis of the three smiles.

Indispensable bibliographies and discographies close out this excellent volume. They brim with enticing suggestions for further study, ensuring devotées and newcomers alike find fodder for their passion. Mordden excels in the role of recommender as he gives himself free reign to comment (“Rose was made on Merman from top to toe …”).

Those familiar with Sondheim will delight in Mordden’s reactions and opinions as well as the notes and observations about Sondheim’s various collaborators, including Jerome Robbins (“Some love a fight — Jerome Robbins, for instance.”), Arthur Laurents, and, of course, Hal Prince. Newcomers will find themselves delightfully overwhelmed with synopses, context, comparison and history, sometimes accompanied by Mordden’s chatty asides.

Stephen Sondheim has inspired scholarship and celebratory retrospectives almost from the moment he began to write professionally. This bounty of material will never be enough to completely satisfy (remember Mordden’s pronouncement that “there’s so much there”). Mordden’s guide is a welcome addition to the growing canon of Sondheim study, brilliantly highlighting his subject’s lasting stamp on musical theater.

THERESA J. BECKHUSEN has written for American Theatre, The Sondheim Review and Ex. Ex. Midwest, among others. She is the development associate at American Composers Forum.

Rick Pender, founding editor of Everything Sondheim, has created a brand new, … END_OF_DOCUMENT_TOKEN_TO_BE_REPLACED

“We had the same priorities.  We wanted to take the audience where we wanted to … END_OF_DOCUMENT_TOKEN_TO_BE_REPLACED

In 1997, Stephen Sondheim sat down with Library of Congress Senior Music … END_OF_DOCUMENT_TOKEN_TO_BE_REPLACED

Editor's note: Since the printing of this article, Sondheim is reportedly no … END_OF_DOCUMENT_TOKEN_TO_BE_REPLACED

Isn’t it rich? His career arc stretches from writing the lyrics for West Side … END_OF_DOCUMENT_TOKEN_TO_BE_REPLACED