For Everything Sondheim’s first installment of “Singing Sondheim,” I’m looking at recent releases from male singers. You can expect a follow-up column with female singers next month (including discs by Liz Callaway and Susan Egan). After that, this occasional feature will mix it up, always striving to bring you both high profile and less visible releases that feature music by Sondheim. 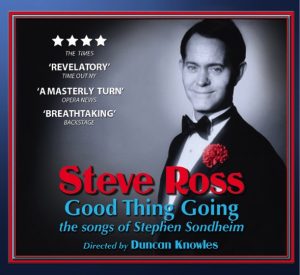 Good Thing Going – The Songs of Stephen Sondheim (Harbinger Records). The suave and urbane pianist-singer Steve Ross, often associated with songwriters such as Noël Coward and Cole Porter, branched out to Sondheim’s work for a concert engagement in London in 2008. Two of those performances were recorded, and the result is this delectable album. Ross’s voice, which often hearkens back to Coward’s, and his talent for mining lyrics, are beautifully suited to all of the material on Good Thing Going, whether it’s a familiar number (“Send in the Clowns”) or one heard less frequently, “Sand” (written for the movie Singing Out Loud). In the former instance, Ross’ sensitive vocals — combined with his insightful introduction — enhance the bittersweet emotion in the number. With “Sand” he finds a playful jazziness in a song often performed with a sort of melancholy. His work at the keyboard and as arranger also proves terrific, particularly when it comes to pairing seemingly unrelated songs. One of his choicest selections combines “So Many People” from Saturday Night and “One More Kiss” from Follies. Equally impressive throughout are Ross’s pianistic embellishments to songs. With Follies’ “Ah, Paris!,” a short piano section has a giddy and somehow crystalline sense, making the melody actually sound a bit like a chandelier that might have hung in the Moulin Rouge. 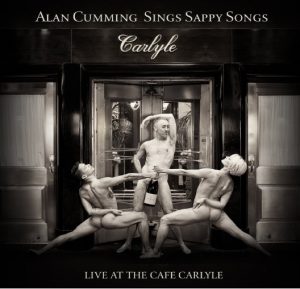 Café Carlyle in 2015 offers a touching portrait of an artist who’s generally thought of as being ribald or a villain? (witness his onstage work in Cabaret or on television in The Good Wife). As he admits at the start of the recording, you might want to have a hankie handy for some of the offerings, which range from contemporary pop tunes (Keane’s “Somewhere Only We Know” and Miley Cyrus’s “The Climb”) to show tunes such as “You You You” from Kander and Ebb’s The Visit and Noël Coward’s “If Love Were All.” With these songs and others, Cumming’s Scottish brogue and his inherent theatricality marvelously enhance the emotions inherent in the music and lyrics. Two Sondheim songs show up on Sappy Songs. One is an amusing medley that gets the name “No One Is Alive While I’m Around.” In it the singer (accompanied by pianist Lance Horne) points out similarities among several Sondheim tunes. The other is a carefully considered and moving rendition of “Ladies Who Lunch.” You might find yourself tempted to skip immediately to the Sondheim tracks, but I urge you to resist the impulse. Cumming’s show had a distinct, play-like arc that’s impeccably captured on the recording. Start with the first track and enjoy this wonderful musical journey with him. 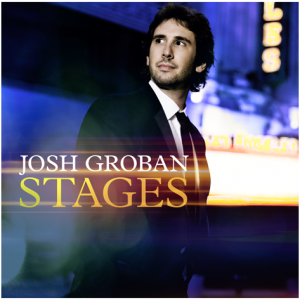 Stages (Reprise). Grammy-nominated Josh Groban has had a love affair with the theater since high school. (Perhaps you saw the nationally televised clip during the 2016 Tony Award ceremony of his high school appearance as Tevye in Fiddler on the Roof.) With Stages, the swoon-inducing vocalist demonstrates his grace with a variety of material ranging from the anthemic (“Bring Him Home” from Les Misèrables) to the intimate (“Rainbow Connection” from The Muppet Movie).

Sondheim is represented on the album with a pair of songs. First comes a sumptuously rendered medley of “Children Will Listen” and “Not While I’m Around.” Groban follows this with “Finishing the Hat,” which he fills with a gentle sort of passion and angst.

Groban will make his Broadway debut later in 2016 in Natasha, Pierre and the Great Comet of 1812. For tracks on Stages he is joined by pop star Kelly Clarkson (“All I Ask of You” from The Phantom of the Opera) and six-time Tony winner Audra McDonald, whose soprano blends splendidly with Groban’s tenor, resulting in a thrilling rendition of “If I Loved You” from Carousel. 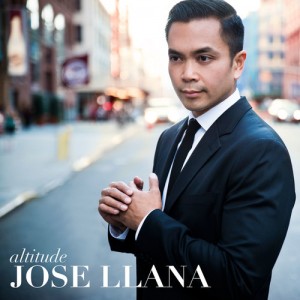 Altitude (Yellow Sound Label). For his debut solo recording, Jose Llana (a veteran of Broadway shows ranging from The 25th Annual Putnam County Spelling Bee to The King and I and off-Broadway shows such as David Byrne and Fatboy Slim’s Here Lies Love) offers tunes he’s delivered onstage and complements them with others ranging from Ed Sheeran’s “Thinking Out Loud” to Sondheim’s “Marry Me a Little.” The 13-track disc is a superb showcase for Llana’s supple voice, which has both smoky quality to it in its lower registers and a lighter and more delicate sound in the upper ones. 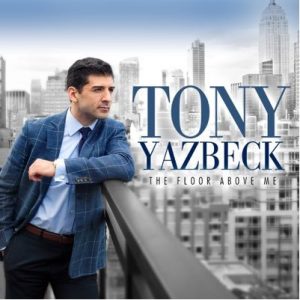 The Floor Above Me (PS Classics). Tony Yazbeck, the Broadway hoofer who picked up a Tony nomination for his turn in the On the Town revival in 2015, takes listeners on an autobiographical trip on this recording with selections ranging from “Pure Imagination” to a medley of “Change Partners” and “Let’s Face the Music and Dance.” He revisits some of the numbers he’s performed on Broadway, including ones from On the Town and “All I Need Is the Girl” from Gypsy, the disc’s single Sondheim-related cut. It’s a charming, smile-inducing listen.

Contributing Editor ANDY PROPST, founder of AmericanTheaterWeb.com, has written for such diverse publications as The Sondheim Review, The Village Voice and Backstage. He is also the author of You Fascinate Me So: The Life and Times of Cy Coleman.

Rick Pender, founding editor of Everything Sondheim, has created a brand new, … END_OF_DOCUMENT_TOKEN_TO_BE_REPLACED

“We had the same priorities.  We wanted to take the audience where we wanted to … END_OF_DOCUMENT_TOKEN_TO_BE_REPLACED

In 1997, Stephen Sondheim sat down with Library of Congress Senior Music … END_OF_DOCUMENT_TOKEN_TO_BE_REPLACED

Editor's note: Since the printing of this article, Sondheim is reportedly no … END_OF_DOCUMENT_TOKEN_TO_BE_REPLACED

Isn’t it rich? His career arc stretches from writing the lyrics for West Side … END_OF_DOCUMENT_TOKEN_TO_BE_REPLACED