Two recent books about show business share a tangential tie to Stephen Sondheim while otherwise being about as different as they can be. American entertainment lawyer and theater producer John Breglio’s smart and savvy I Wanna Be a Producer: How to Make a Killing on Broadway … or Get Killed is accurately described as “part memoir, part handbook,” while British writer/composer/lyricist Leslie Bricusse’s blithe and breezy Pure Imagination is subtitled “a sorta-biography,” which seems to be a play on words for “autobiography.”

As befits a lawyer, Breglio is circumspect in the backstage stories that he tells, confidentiality being a hallmark of his profession. Still, there are enough tales to make things interesting — especially about A Chorus Line, Ballroom and Dreamgirls, thanks to his long and close association with wunderkind director-choreographer Michael Bennett. Breglio deftly integrates the tales as illustrations of the process of making theater as a Broadway producer. His book takes you step by step from having the idea to acquiring the rights to putting the collaborative team together and continues through raising the money, doing a workshop (or not), getting a theater, working with or without a star and much more. Of course, it climaxes with opening night and a pithy chapter on how to have a successful opening night party.

Breglio distills a career’s worth of knowledge with admirable clarity. Just when you think he might be dwelling too much in the past, he displays his contemporary acuity by describing how things have or haven’t changed in today’s landscape.

Perhaps because Sondheim was Breglio’s longtime client, there are no personal anecdotes, but he does use the scenic designs of the original Broadway productions of Company and Sweeney Todd to good effect as examples in his chapter on set design. Even better, he paints a vivid portrait of the forbidding business landscape in which Sondheim has had to work throughout his career, making his achievements, both artistic and commercial, all that much more impressive. 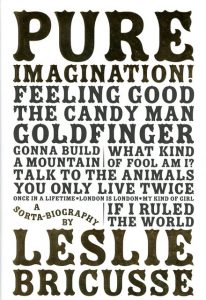 I have long found Leslie Bricusse to be a confounding figure in musicals. I am as big a fan of some of his early work — the songs for Stop the World – I Want to Get Off and The Roar of the Greasepaint – The Smell of the Crowd (both co-written with Anthony Newley) and his music and lyrics for the films Goodbye, Mr. Chips (screenplay by Terence Rattigan) and Scrooge (screenplay by Bricusse) — as I am not a fan of some of his later efforts, specifically the musical Jekyll & Hyde (music by Frank Wildhorn) and Bricusse and Henry Mancini’s new songs for the stage adaptation of Victor/Victoria. (I like the film score just fine.) I find it bewildering that one man wrote them all.

Pure Imagination doesn’t answer my question as to how that could be. But it is a damned entertaining review of a colorful, success-blessed, celebrity-filled life, as well as a loving portrait of his nearly 60-year marriage to Yvonne “Evie” Warren, a stage and film actress (her stage name is Yvonne Romain) who starred opposite Elvis Presley in Double Trouble. The pair watch with bemused consternation as their more famous friends — Newley, Joan Collins, Sean Connery, Roger Moore, Michael Caine, Rex Harrison, Rachel Roberts, André Previn, Sammy Davis Jr., Frank Sinatra, Mia Farrow, Peter Sellers, Liza Minnelli, Alan Jay Lerner, Blake Edwards, Julie Andrews and many more — change partners and keep dancing as the years blur by. The couple travels to exotic places such as the Riviera, Capri, Antibes, Hollywood and Broadway in style (by yacht, Concorde, limousine and so on) and life is an engagingly sensuous swirl.

Bricusse writes wittily and well in the manner of his friend David Niven, the actor whose 1972 memoir The Moon’s a Balloon might have served Bricusse as a model. He offers sharp characterizations of interesting people (his depiction of Rex Harrison is particularly notable) and trenchant observations about his trade, providing especially evocative accounts of the mod London of the swinging ’60s and its equivalent Hollywood era.

Occasionally there are hints of the lily being gilded, such as in his account of discussions about a possible collaboration with composer Richard Rodgers, which foundered only because, unbeknownst to him, Bricusse’s 20th Century Fox contract for Doctor Dolittle prevented him from working with anyone else until the film’s premiere, a year and a half away. Bricusse offers two ideas — musicals about Noah and Henry VIII — then suggests that Rodgers wrote only two more shows: Two by Two and Rex, utilizing both ideas. He fails to recall one more after Rex, Rodgers’s stage musical adaptation of I Remember Mama.

Stop the World opened on Broadway seven months before A Funny Thing Happened on the Way to the Forum, and this confluence brought the Bricusses into contact with Sondheim, with whom they formed a friendship. Bricusse says they bonded over losing the Tony for best score to Lionel Bart for Oliver! (although Forum wasn’t even nominated for that award) and writes about their relationship with obvious fondness and admiration.

His story about Sondheim asking him for an introduction to the Beatles and the meeting it engendered is priceless. The couple ultimately lost touch with Sondheim in the ensuing years, though he pops up now and again to renew acquaintances. One fun fact that somehow doesn’t make it into the book: Evie appeared as the murdered title character in the 1973 film mystery The Last of Sheila that Sondheim co-wrote with Anthony Perkins.

As unalike as these books are, both make for good reads.

ERIK HAAGENSEN, a freelance journalist and an award-winning playwright/lyricist, was the final theater editor of Backstage. His column appears regularly at bwaytunes.com.

Rick Pender, founding editor of Everything Sondheim, has created a brand new, … END_OF_DOCUMENT_TOKEN_TO_BE_REPLACED

“We had the same priorities.  We wanted to take the audience where we wanted to … END_OF_DOCUMENT_TOKEN_TO_BE_REPLACED

In 1997, Stephen Sondheim sat down with Library of Congress Senior Music … END_OF_DOCUMENT_TOKEN_TO_BE_REPLACED

Editor's note: Since the printing of this article, Sondheim is reportedly no … END_OF_DOCUMENT_TOKEN_TO_BE_REPLACED

Isn’t it rich? His career arc stretches from writing the lyrics for West Side … END_OF_DOCUMENT_TOKEN_TO_BE_REPLACED