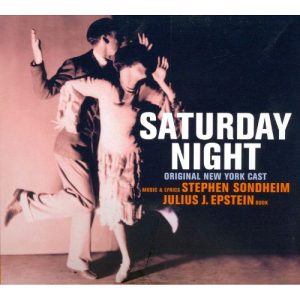 en Sondheim was eager to begin his Broadway career, and he landed a golden opportunity in 1954. Lemuel Ayers, an ambitious young producer, obtained the rights to musicalize a play, Front Porch in Flatbush, about a group of Brooklyn buddies involved in a get-rich-quick stock investment scheme in 1928. He recruited Sondheim, age 24, to write some music and lyrics for Saturday Night, aiming for a Broadway debut in 1955.

Unfortunately, Ayers died unexpectedly at age 40, and the production never happened. But Sondheim had created a solid audition portfolio to use in pursuit of new opportunities. Songs he wrote for Saturday Night impressed Leonard Bernstein, paving the way for Sondheim’s role as West Side Story’s lyricist. He wanted to write music, too, but his mentor Oscar Hammerstein II convinced him that working with Bernstein’s team—which included playwright Arthur Laurents and director/choreographer Jerome Robbins—was the best way to make Broadway connections. He was right.

Saturday Night gathered dust for four decades until 1997 when it was finally produced at London’s Bridewell Theatre. Two years later Pegasus Players in Chicago gave the show its American premiere with a script revised by Sondheim and orchestrations by his longtime collaborator Jonathan Tunick. The show sounds like something by a young composer from the 1950s (which it was) but it has glimmers of Sondheim’s promising future.

Because it’s a story about young people, Saturday Night has principally become a popular show for college and university productions.

Spring 1929, seven o’clock on a Saturday evening in Brooklyn. Gene Gorman’s working-class buddies have gathered on his front porch in Flatbush, Brooklyn. They’re killing time, playing music and lamenting not having dates (“Saturday Night”). A few more friends arrive, including Hank and Celeste, a married couple, with their friend Mildred. Gene appears, elegantly dressed in a tuxedo, his imagined ticket to the world of Park Avenue (“Class”). He plans to crash the Junior League Cotillion at Manhattan’s Plaza Hotel. His friends get acquainted (“Delighted, I’m Sure”) and make plans to spend the evening at a movie theater.

Gene, a runner on Wall Street, is a lovable guy who’s something of a flimflam man. He proposes a get-rich-quick scheme, asking the guys for $100 each to buy some hot stock in Montana Chem Corp. He assures them they’ll be rich in a week, realizing a $10,000 return. Gene’s cousin Eugene shows up with his fancy car, a Pierce-Arrow. He’s heading to Florida and asks Gene to look after his car.

At the Plaza, Gene’s attempt to crash the posh event fails. He meets a girl posing as a Southern belle who’s also been rejected. He introduces himself as “Gene Goulding Gorman, the Third,” and she says she’s “Helene Calhoun Forrester.” They pair up (“Isn’t It?”) and he offers her a ride home in the Pierce-Arrow. Meanwhile at the Brooklyn movie theater, Gene’s friends argue about the evening’s expenses while Celeste and Mildred reflect on their dreams (“In the Movies”).

Back at Gene’s house later everyone is eager to hear about his evening. An unknown girl phones for Gene, not identifying herself but saying she will stop by soon. Meanwhile, one of the guys, Bobby, explains how he seduces girls (“Exhibit A”).

The mystery girl is “Helene”—sans Southern accent, she’s Helen Fogel, also from Brooklyn. She located Gene because his driver’s license was stuck on the back of a photo of himself he gave her, supposedly on a yacht in the Mediterranean (actually a fishing boat in Sheepshead Bay). He admits he exaggerated his identity, but tells Helen he will soon make a killing in the stock market. They enjoy each other’s company (“A Moment with You”).

The next day, Gene and Helen visit a luxury apartment on Sutton Place. He can’t afford it, but they dream about life there (“Gracious Living Fantasy”). She criticizes him for not growing up, and he impetuously signs the lease, convinced he’ll be rich a week later when his stock scheme pays off. When the stock collapses (“Montana Chem”), Gene sells his cousin’s car to cover the lease. Helen is furious, but admits she loves him (“So Many People”). They announce their engagement, and Gene’s friends anticipate the wedding (“One Wonderful Day”). As they celebrate, cousin Eugene returns unexpectedly, looking for his car. Gene lies, saying it was stolen. Eugene calls the police. 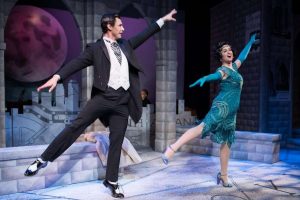 A week later on another Saturday night, everyone is back on Gene’s porch, still wondering what to do (“Saturday Night – Reprise”). Police detectives, hunting for Gene, mistakenly arrest Eugene as the guy who went off with his friends’ money, engaged in a shady stock deal and sold his cousin’s car. Eugene is taken to the police station.

Hank and Celeste reminisce about their first date (“I Remember That”). Gene and Helen go to Dakota Doran’s club to relax (“Love’s a Bond Blues”). But he’s anxious and they argue. In desperation, Gene tries to shoot himself with Helen’s gun—but it’s a water pistol. She says she will always love him (“All for You”). Gene, afraid of becoming a laughing stock, continues to threaten suicide.

At the police station, Gene’s friends have bailed out Eugene (“That Kind of a Neighborhood”). Helen tells everyone about Gene’s threat, and they ask the confused police for assistance. Gene shows up to surrender himself. Surprisingly the Sutton Place broker arrives to say that the prior tenants have decided to keep the apartment. For his inconvenience, Gene’s deposit money will be doubled and returned, enabling him to buy back Eugene’s Pierce-Arrow.

Gene learns that Helen arranged for the agent to show up and settled the money matter earlier, testing Gene to do the right thing. More grown up and more in love with Helen, he decides to leave Wall Street and take a job at her father’s chicken-plucking business. She admits that she’s happy with the prospect of life in Brooklyn with Gene (“What More Do I Need?”). He prepares to take Eugene’s place in jail, but the kindly police release him until Monday, when he will repay his debts. As the final Saturday night ends, everyone looks forward to the future (“One Wonderful Day,” reprise).

Rick Pender, founding editor of Everything Sondheim, has created a brand new, … END_OF_DOCUMENT_TOKEN_TO_BE_REPLACED

“We had the same priorities.  We wanted to take the audience where we wanted to … END_OF_DOCUMENT_TOKEN_TO_BE_REPLACED

In 1997, Stephen Sondheim sat down with Library of Congress Senior Music … END_OF_DOCUMENT_TOKEN_TO_BE_REPLACED

Editor's note: Since the printing of this article, Sondheim is reportedly no … END_OF_DOCUMENT_TOKEN_TO_BE_REPLACED

Isn’t it rich? His career arc stretches from writing the lyrics for West Side … END_OF_DOCUMENT_TOKEN_TO_BE_REPLACED