“We had the same priorities.  We wanted to take the audience where we wanted to go, not where they wanted to go.”  This is Harold Prince’s description of his collaboration with Stephen Sondheim, and it explains why, in a 12 year period beginning in 1970 with Company and ending in 1981 with Merrily We Roll Along, their work redefined the American musical, and gave us a body of work unparalleled in its reach, depth, and imagination, and whose legacy and influence has yet to be determined.  From the joys and travails of marriage, to the perils of revisiting the past, to Grand Guignol, to 1850s Japan and 1900 Sweden, and to the unending tension between art and commerce, they took us on journeys we’d never considered, least of all in a musical, and brought to the form a level of sophistication, literacy, wit, and showmanship that current and future artists will study for guidance and inspiration. 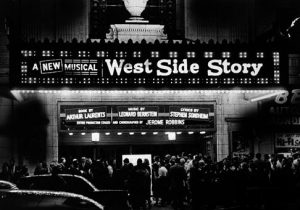 Twenty-year-old Prince and eighteen-year-old Sondheim first met on opening night of South Pacific in 1948.  Prince was beginning to work in the office of George Abbott, who was to become his mentor; Sondheim had begun his apprenticeship under family friend Oscar Hammerstein II, writing four different musicals as instructed, and sitting in on rehearsals for Allegro, a work that in large part served as a touchstone for their own outlook and future efforts. The show is, in effect, the first concept musical, a term which became virtually synonymous with all Prince/Sondheim shows.  In meetings which started soon after that first night and resumed after Prince returned from the army in 1952, they talked about the state of the musical, its ills, and how they could fix them.  According to Prince, they both knew that they each wanted to have exciting lives in the theatre. And even before their collaboration took off, the roots of their friendship were in place.  When Sondheim was asked to write the lyrics for West Side Story, he reached out to Prince to serve as a producer.  Six years later, when Sondheim graduated to composer/lyricist on A Funny Thing Happened on the Way to the Forum, Prince again served as producer.  At the same time, they had already begun to discuss projects for which Sondheim had written songs and which they tried to have produced.  So that by the time George Furth’s collection of non-musical playlets came to Prince via Sondheim and evolved into Company, the working relationship that led to their group of masterworks was firmly in place. 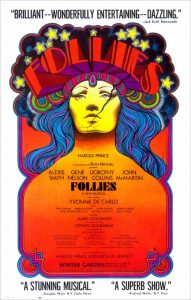 Ted Chapin, who as a Harvard undergraduate sat in on the entire tryout process of Follies in Boston and wrote about it in Everything Was Possible, describes Prince and Sondheim’s work as separate, though obviously based on extensive discussion. “So much of their collaboration,” says Ted, “was sitting and talking, and then Sondheim going off to write.” In terms of specifics, he feels the latter would have a lot to say but would be reluctant to say it.  Sondheim does say that Prince would present the proposed set to him, which would then allow him to start writing songs. And, as he describes in great detail in his 2003 Lyrics and Lyricists talk at the 92nd Street Y, there is the now well-known debate over the initial ending of Company.  He first wanted to end it with the ambivalent “Marry Me a Little,” in which the protagonist Robert retains his doubts about marriage while professing his “interest” in pursuing it.  When Prince felt the approach was too dark for the standard Broadway audience, the composer offered “Multitudes of Amys,” which is also hardly a paean to commitment. It then became clear to Sondheim that an affirmative, forward-looking conclusion was the desired solution, and his answer became the indelible “Being Alive.”  This result was the product of what Sondheim calls the need for abrasion in arriving at real creativity.

Perhaps the clearest available evidence of the way in which the relationship worked is the very beginnings of each of their five major successes (I exclude Merrily We Roll Along only because of its two-week Broadway run despite its major afterlife).  The sequence here demonstrates the artistic commonality, the trust, the mutual strengths of the partners, and their regard for those strengths. 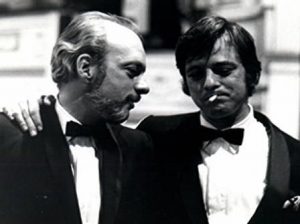 Company
As touched on earlier, Sondheim brought Prince the short pieces that became their first collaboration. Two things are clear from this. One is his high regard for Prince’s judgment to determine what, if any, course would be best. The other is the director’s almost immediate sense that an ideal musical could be fashioned from them. And of course, Sondheim’s grasp of Prince’s insight and willingness to follow it speaks volumes.

Follies
James Goldman had written a play, The Girls Upstairs, about a reunion of former musical performers.  Prince found it predictable but sensed the possibilities in musicalizing it by merging past and present and concentrating on mood rather than plot.  Prince said, “A straight-on realistic musical always seems to me a contradiction in terms.”  Sondheim noted, “With Hal prodding us we began to think in surrealistic rather than naturalistic terms.” Prince then convinced Sondheim and Goldman of his willingness to undertake the production if Company could be done first.

Pacific Overtures
Book writer John Weidman had brought his non-musical play about Admiral Perry’s visit to Japan to Prince; the director saw limited interest in it as a play, but again, felt that musical theatre was the way to create the tapestry and scope that he felt the story needed. Sondheim had little interest in the material; he pondered it, bought in, and later described it as his favorite show. 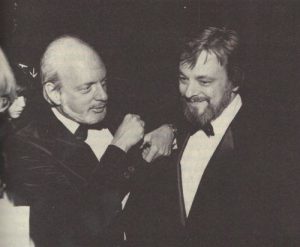 Prince and Sondheim during Sweeney Todd

Sweeney Todd
The exact reverse of Pacific Overtures.  Sondheim saw a production of an 1830 version of this famous English tale in London; he brought the idea of musicalizing it to Prince. The director had little interest in a story of vengeance and blood lust, but saw the possibilities of turning it into an indictment of the ills brought by the Industrial Revolution.  The combination of Sondheim’s theatrical sensibility and Prince’s social conscience ultimately made the piece the landmark it became.

A Little Night Music
Though chronologically not the last of the five shows, it perhaps best illustrates the synergy between these two men. They first heard a reading of a non-musical play based on Ingmar Bergman’s film Smiles of a Summer Night. Neither saw the need for music. Prince’s wife strongly disagreed, convinced them both, and the result was their biggest commercial hit.  Furthermore, during production, Prince became convinced that Desiree, the leading character, needed a cathartic song toward the end of the second act.  Sondheim didn’t see it, but composed a number for the vocal range of Glynis Johns; the song was “Send in the Clowns,” which became his biggest, if not only, commercial hit. 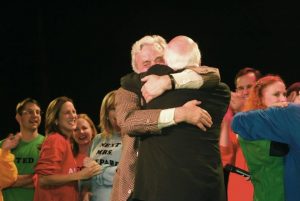 Sondheim and Prince at the 2002 Merrily We Roll Along reunion

This openness to each other and to third parties, combined with a search for what had not been seen or considered before, describes the essence of their relationship and its results. And perhaps the greatest and most ironic indication of their bond is Sondheim’s reaction to the final fruitless efforts to pull Merrily together, “That month of fervent hysterical activity was the most fun I ever had in a show.”

Rick Pender, founding editor of Everything Sondheim, has created a brand new, … END_OF_DOCUMENT_TOKEN_TO_BE_REPLACED

“We had the same priorities.  We wanted to take the audience where we wanted to … END_OF_DOCUMENT_TOKEN_TO_BE_REPLACED

In 1997, Stephen Sondheim sat down with Library of Congress Senior Music … END_OF_DOCUMENT_TOKEN_TO_BE_REPLACED

Editor's note: Since the printing of this article, Sondheim is reportedly no … END_OF_DOCUMENT_TOKEN_TO_BE_REPLACED

Isn’t it rich? His career arc stretches from writing the lyrics for West Side … END_OF_DOCUMENT_TOKEN_TO_BE_REPLACED