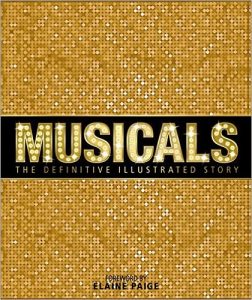 arkly titled, lavish coffee-table book Musicals, from England’s prestigious DK publishing house, grandly promises to be “The Definitive Illustrated Story” of what it terms the “modern musical.” Showcasing 125 stage and screen works across the last nearly 100 years from America, England, Europe, and even Japan — beginning with Show Boat in 1927 — plus offering a list of 100 “other musicals” that are “some of the world’s most prominent and beloved” but nevertheless didn’t make the 125, it is neither authoritative nor complete, despite also profiling writers, directors, production areas and historical data. It’s mostly a mess.

Written by a committee of 12, the book features no credit that I can find for who assigned and edited the copy, but considering the much higher than an elephant’s eye stack of factual errors on display, it appears somebody was asleep at the switch. The mistakes begin on the first page of the first show. A credit box lists Edna Ferber as the author of the book for Show Boat. That, of course, should be Oscar Hammerstein II. (Ferber wrote the novel on which Hammerstein based his book and lyrics.) Here are 10 more egregious examples of errors, starting with two Sondheim-related ones:

The decision to cover film as well as stage is flawed, as the forms developed differently and had little effect on the other, except when Hollywood mangled film versions of Broadway hits. Also, although the book is an impressive physical product — sturdily bound and handsomely designed on heavy paper with attractive layouts and graphics — a strong bias toward film is reflected in movie stills repeatedly being used to represent stage shows.

The serious lack of theater images drains the proceedings of authenticity, especially when photos from failed film adaptations are used to represent well-loved stage successes. Angela Lansbury was Mame Dennis, not Lucille Ball; Richard Kiley was Cervantes/Don Quixote, not Peter O’Toole; and most emphatically Glynis Johns was Desirée Armfeldt, not Elizabeth Taylor.

The choice of titles among the 125 is often infelicitous. For just one example, the whitewashed 1946 film bio of Cole Porter, Night and Day, makes the cut, but Company and/or Follies don’t? (Neither they, nor any other Sondheim titles, even crack the volume’s second set of 100.)

Which leads me to the book’s Sondheim coverage. While respectful, it is more than occasionally clueless. In the two pages devoted to Sondheim, Follies is described merely as having “paid tribute to early Broadway shows.” Pacific Overtures was “a tribute to haiku poetry and Japanese Kabuki.” There is no mention at all on those two pages of Saturday Night, Anyone Can Whistle, Do I Hear a Waltz?, Evening Primrose, The Frogs, the BAM Candide, Merrily We Roll Along, Passion or Wise Guys/Bounce/Road Show. It’s as if they never existed.

The entries on the Sondheim shows chosen for the top 125 — West Side Story, Gypsy, A Funny Thing Happened on the Way to the Forum, A Little Night Music, Sweeney Todd and Into the Woods — contain more errors than insight, although they generally manage to convey the basics. However, it was an odd choice to profile the film of Woods rather than the stage original. This allows the musical to be the final entry in the 125, which are arranged more or less chronologically, but I have a hunch that’s not the only reason. Bumping Woods to the end avoids reference to its fierce Tony battle with The Phantom of the Opera. (In the section on director Hal Prince, Phantom is trumpeted as his “greatest directorial success.” I doubt that he would agree.)

That’s just one example of what I would call the book’s Brit bias. At times I felt as if the authors were living in an alternate British reality. But there’s a real mystery on that count, too. Although Julie Andrews’ musicals are amply represented, and her work is often discussed, there isn’t a single photo of her in the book — not on The Sound of Music pages (in a rare exception, they are mostly of Mary Martin and the Broadway cast, though, except for a paragraph or two, it’s the film that’s discussed), not on the Mary Poppins pages, not on the My Fair Lady and Camelot pages. Nada. What’s that about?

I’m afraid Musicals serves neither the neophyte nor the expert well. It regularly misleads the former and will only exasperate the latter.

ERIK HAAGENSEN, a freelance journalist and an award-winning playwright/lyricist, was the final theater editor of Backstage. He writes a column that appears regularly at bwaytunes.com.

Rick Pender, founding editor of Everything Sondheim, has created a brand new, … END_OF_DOCUMENT_TOKEN_TO_BE_REPLACED

“We had the same priorities.  We wanted to take the audience where we wanted to … END_OF_DOCUMENT_TOKEN_TO_BE_REPLACED

In 1997, Stephen Sondheim sat down with Library of Congress Senior Music … END_OF_DOCUMENT_TOKEN_TO_BE_REPLACED

Editor's note: Since the printing of this article, Sondheim is reportedly no … END_OF_DOCUMENT_TOKEN_TO_BE_REPLACED

Isn’t it rich? His career arc stretches from writing the lyrics for West Side … END_OF_DOCUMENT_TOKEN_TO_BE_REPLACED