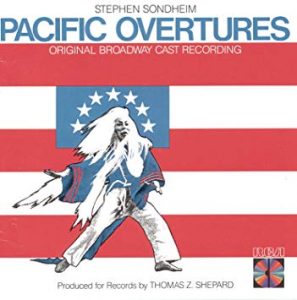 Sondheim’s ninth musical, Pacific Overtures (1976), is considered by many to be his most unusual. It was his fourth collaboration with Hal Prince as director and producer. Prince introduced Sondheim to young playwright John Weidman, who had advanced the idea of a dramatic play about 19th-century Japan, chronicling the 1853 arrival of Commodore Matthew C. Perry and America’s “gunboat diplomacy” employed to force Japan out of centuries of isolation.

Prince was fascinated with Japanese theater conventions, especially Kabuki, a popular traditional dramatic form that used singing and dancing, with stylized makeup and male actors playing all roles. He envisioned telling the story from Japan’s perspective. Sondheim and other Prince collaborators were less enthusiastic, since most of them had little or no familiarity with Asian music or storytelling. But they eventually agreed to participate. 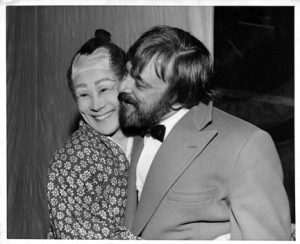 They imagined a Japanese playwright who had seen several Broadway productions then returned home to write about Perry’s visit. Sondheim said that premise “helped to give us tone and style for the show.” He had to find a new way to compose that sounded Japanese. He also found himself working on a show that was about ideas rather than characters. Two Japanese men—a minor samurai and a fisherman who lived in the United States for several years—on very different paths somewhat humanized the story. Even so, Pacific Overtures felt didactic and mystified critics and audiences. In Finishing the Hat, his book of lyric studies, Sondheim called it “the most bizarre and unusual musical ever to be seen in a commercial setting.”

The Reciter, a narrator and storyteller, describes the Floating Kingdom of Japan, an island empire in 1853, undisturbed by intruders for centuries. Foreigners had been driven out 250 years earlier and prohibited from returning, establishing a state of isolated peace (“The Advantages of Floating in the Middle of the Sea”).

Manjiro, a Japanese fisherman rescued at sea by Americans and taken to Massachusetts, returns to warn his countrymen that America will soon send an expedition to Japan. He could be condemned to death for leaving—and for returning. Lord Abe, the Shogun’s first councilor, doubts his veracity, but prepares to deal with the possible arrival of Americans.

Kayama, a low-level samurai, is enlisted to tell the Americans they are not welcome. His wife Tamate fears his role could lead to a dire outcome: If the Americans refuse, Kayama will be disgraced and expected to take his own life. Kayama tells her “There Is No Other Way.”

The arrival of heavily armed American ships (“Four Black Dragons”) panics fishermen, merchants and others. Kayama’s polite orders are rejected. He proposes having Manjiro follow up more officiously. Perry, bearing a letter from U.S. President Fillmore, rebuffs Manjiro and insists on speaking directly with the Shogun.

Lord Abe, Manjiro, and Kayama visit the indecisive Shogun, whose scheming mother poisons him using “Chrysanthemum Tea” to prevent him from receiving the letter. Nevertheless, the Americans insist on delivering it. Kayama suggests a meeting in a small cove at Kanagawa where the sand can be covered with mats and a “treaty house” built so the Americans never step on Japanese soil.

Kayama is promoted to governor of Uraga. He and Manjiro travel there together, composing “Poems” along the way about their two loves, Kayama’s wife and Manjiro’s beloved America. Arriving in Uraga, Kayama discovers Tamate has committed suicide, believing he has been executed. 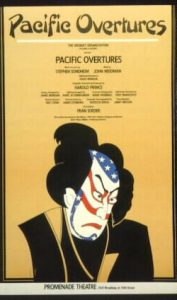 A garish madam brings four inexperienced girls for the American sailors (“Welcome to Kanagawa”). The delegations exchange gifts. The Japanese have assembled an army to intimidate the Americans, but the Americans only laugh. Commodore Perry urges the Japanese to accept the “pacific overtures” set forth in the president’s letter and warns them he will use military might if they refuse to interact with the world.

The Reciter explains that no record exists of the conversation in the treaty house. But three accounts are offered—from an old man, from his younger self who was there as a child, and from a samurai warrior who hid beneath the treaty house floor (“Someone in a Tree”).

The Japanese are confident the Westerners will stay away for another 250 years. But the lion-like Kabuki figure of Commodore Perry performs a strutting, leaping dance of triumph. He exits waving American flags.

At the Imperial Court, the child emperor (portrayed by a puppet) promotes Lord Abe to Shogun, acknowledges Kayama as governor of Uraga, and elevates Manjiro to a samurai. Despite their conviction that the Americans would not return, a marching band enters led by an American Admiral. Lord Abe fearfully accepts his demands. Admirals from England, the Netherlands, Russia, and France (“Please Hello”) present further demands, and Abe acquiesces to each. 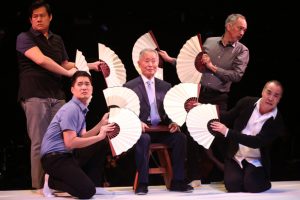 George Takei in the 2017 revival

Japan changes under Western influences. Kayama and Northern Japan are transformed by Western innovations (“A Bowler Hat”). Manjiro is oppositely drawn to Japanese tradition and practices an ancient art of samurai sword fighting. His teacher’s beautiful daughter is rudely mistaken for a geisha by Cockney sailors (“Pretty Lady”); her father summarily executes them. Manjiro and his teacher are reprimanded, but many see them as heroes. Lord Abe believes Japan must learn the Westerners’ secrets of power and success. Samurai, including Manjiro, assassinate him. Kayama cannot understand his friend’s transformation. They fight, and Manjiro kills Kayama.

The conservative Lords of the South are grateful to Manjiro for eliminating the Shogun. They advocate isolation. However, the emperor (now played by the Reciter) declares his word to be supreme law. He commands all samurai to put away their swords and take up useful trades as Japan opens itself to the world. They must compete with the West and surpass the nations that have entered their realm (“Next”).

Rick Pender, founding editor of Everything Sondheim, has created a brand new, … END_OF_DOCUMENT_TOKEN_TO_BE_REPLACED

“We had the same priorities.  We wanted to take the audience where we wanted to … END_OF_DOCUMENT_TOKEN_TO_BE_REPLACED

In 1997, Stephen Sondheim sat down with Library of Congress Senior Music … END_OF_DOCUMENT_TOKEN_TO_BE_REPLACED

Editor's note: Since the printing of this article, Sondheim is reportedly no … END_OF_DOCUMENT_TOKEN_TO_BE_REPLACED

Isn’t it rich? His career arc stretches from writing the lyrics for West Side … END_OF_DOCUMENT_TOKEN_TO_BE_REPLACED