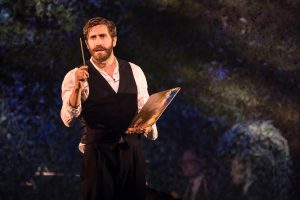 Jake Gyllenhaal played Georges Seurat in the limited run of Sunday in the Park with George. PHOTO BY MATTHEW MURPHY.

There was a significant buzz around the New York City Center’s Gala in October 2016 when movie star Jake Gyllenhaal took on the leading role of Georges Seurat in Stephen Sondheim and James Lapine’s Sunday in the Park with George. He had performed as Seymour for City Center’s Encores! presentation of Little Shop of Horrors in July 2015, so it was evident he could sing. He’s well known for his expressive, charismatic acting; he was nominated for a 2005 Academy Award for his sensitive performance as Jack Twist in Brokeback Mountain and garnered much acclaim playing creepy videographer Louis Bloom in 2014’s Nightcrawler. But could he handle the vocal demands of the musical’s portrait of pointillist painter Georges Seurat, so long identified with its originator, Mandy Patinkin?

Reviews were extremely positive, and the demand for tickets for the brief presentation, staged by Sara Lapine (James Lapine’s niece), demonstrated an appetite for a longer run. A 10-week limited engagement was set for Feb. 23-April 23, 2017. After 11 previews, the minimally staged production had 61 performances at Broadway’s recently renovated 970-seat Hudson Theatre, recouping its investment a few days before closing. Many of the City Center cast members were in the 23-actor ensemble at the Hudson, including Tony Award winner Annaleigh Ashford as George’s muse Dot and his grandmother Marie in Act II. 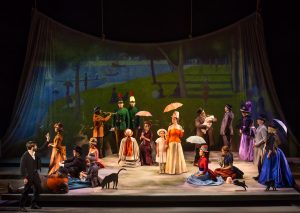 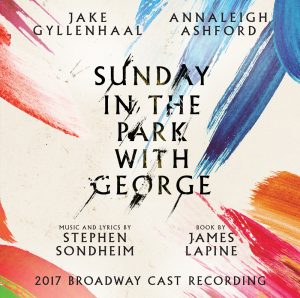 The limited run at the Hudson was extremely successful, but it came and went quickly. Now there’s good news. Immediately after closing, the cast headed into a New York studio to record the show on April 25-26, 2017. The recording was released digitally on Sept. 22, 2017, by the new Arts Music Division of Warner Music Group; the CD version will be available on Dec. 8. For CD orders and other streaming and purchase options, go to this site.

Even if you love the original cast recording from 1984 which clocked in at 69 minutes, you might want this one for your collection with 10 minutes additional of music, including the accompaniment for “Chromolume No. 7” in Act II, as well as several spoken scenes. It’s a wonderful representation of Sondheim’s score and Lapine’s book. Fenwick conducted again (Mark Michaels served as associate conductor), and the orchestra was enlarged to 18 for the recording.

Annaleigh Ashford as Dot and Jake Gyllenhaal as George. PHOTO BY MATTHEW MURRAY

Interpretations of the leading roles by Gyllenhaal and Ashford will cause Sondheim aficionados to listen carefully all over again to this exquisite and thought-provoking work, one of the few musicals to win the 1985 Pulitzer Prize for drama. Both performers use more naturalistic approaches to the roles than their illustrious predecessors. Gyllenhaal’s George is still self-absorbed, but not so coldly obsessive. In fact, he gets beyond “the usual leave-me-alone attitude” (noted by Ben Brantley in the New York Times) and brings a sad, sympathetic intensity to George that differs significantly from Patinkin’s original performance. Gyllenhaal’s tenor vocal range, while not as broad as Patinkin’s, is more than sufficient to carry the role. (Several commentators suggested that he surely had voice lessons in advance of the production’s 10-week engagement.) A video on Gyllenhaal’s Facebook page has him performing “Finishing the Hat” while descends catwalks and wandering through the Hudson’s backstage. It demonstrates his ease and precision with Sondheim’s melodies and lyrics. He brings similar intensity and yearning to the Act II’s George, the artist adrift in the late 20th century. 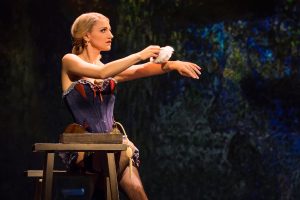 Annaleigh Ashford was sweet and delectable as Dot. PHOTO BY MATTHEW MURRAY

Meanwhile, Ashford brings sweet, natural warmth to Dot, who is delectable and sly, as well as self-assured enough to “move on” to a new life, even as she regretfully abandons George despite her genuine feelings for him. Ashford’s sense of comic timing adds vivacity to her performance. In Act II she is equally endearing as George’s elderly, droll grandmother Marie, speaking with a gentle Southern drawl.

For a taste of Gyllenhaal and Ashford’s chemistry together, check out the studio recording of “Move On” released to NPR and other media outlets. It’s an ample illustration of the appeal of their performances.

There’s no argument about the virtues of Sunday in the Park’s original production and cast recording, especially performances by Patinkin and Peters. But this new recording has many distinctive and engaging qualities, and some listeners might prefer the natural and poignantly human performances by Gyllenhaal and Ashford. They make Sondheim and Lapine’s magnificent, bittersweet opus about love and art new again. Having a permanent record of this well-received production is something to celebrate.

RICK PENDER is the executive editor and publisher of Everything Sondheim, and the past editor of The Sondheim Review. He has been a local theater critic in Cincinnati for 30 years, and he is a past chair of the American Theatre Critics Association. 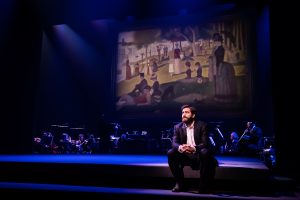 Jake Gyllenhaal onstage at the Hudson Theatre in New York City with the orchestra behind him. PHOTO BY MATTHEW MURRAY

Rick Pender, founding editor of Everything Sondheim, has created a brand new, … END_OF_DOCUMENT_TOKEN_TO_BE_REPLACED

“We had the same priorities.  We wanted to take the audience where we wanted to … END_OF_DOCUMENT_TOKEN_TO_BE_REPLACED

In 1997, Stephen Sondheim sat down with Library of Congress Senior Music … END_OF_DOCUMENT_TOKEN_TO_BE_REPLACED

Editor's note: Since the printing of this article, Sondheim is reportedly no … END_OF_DOCUMENT_TOKEN_TO_BE_REPLACED

Isn’t it rich? His career arc stretches from writing the lyrics for West Side … END_OF_DOCUMENT_TOKEN_TO_BE_REPLACED