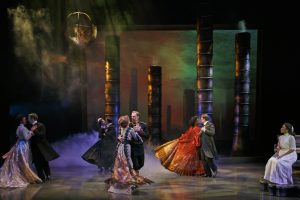 Members of the company in the Stratford Festival’s production of A Little Night Music. PHOTO BY DAVID HOU

The Stratford Festival in Ontario is one of North America’s preeminent theater companies. Producing a rolling repertory of more than a dozen plays and musicals from April through November in four theaters, the festival has earned a reputation for attracting some of the world’s most renowned actors, directors and designers who produce theater that regularly eclipses the work seen on Broadway and London’s West End.

Throughout the years, and certainly under Artistic Director Antoni Cimolino’s leadership, the festival has been known for its particularly canny casting, placing returning festival favorites in choice and unexpected roles with great success. Because of its mandate to feature the work of William Shakespeare, highlighting plays and musicals of literary craftsmanship has been one of the festival’s defining hallmarks.

So you can imagine the perpetual anticipation many Sondheim enthusiasts felt when A Little Night Music was announced for the 2016 season (May 21-Oct. 23). Surely Night Music features a slew of sumptuous roles ripe for seasoned actors. And is any musical (other than perhaps My Fair Lady) able to rival Night Music’s verbal elegance and wit? What’s more, the festival brought in Gary Griffin, associate artistic director at Chicago Shakespeare Theater and an experienced and successful director of Sondheim’s work, to helm the production.

It is therefore baffling to report that the production’s most successful elements were design and music. Debra Hanson’s shimmering costumes wafted through the dark and brooding world of her Act I urban smokestacks and the pastoral and yet distorted gates and vines of Madame Armfeldt’s Act II estate. Kevin Fraser’s saturated and yet hazy lighting provided just the right amount of shadow into which the characters could dart and disappear. Franklin Brasz’s 19-piece orchestra was terrific, providing a lush and musically sensitive rendering of Sondheim’s score, although a little too briskly paced at times for the audience to relish the hidden gems in Sondheim’s lyrics.

All the actors demonstrated fine singing voices, perfectly appropriate to the demands of their roles. The vocal highlight of the production without a doubt was the polished work of the Quintet, the musical’s nostalgic Greek chorus. In these roles, Sean Arbuckle, Barbara Fulton, Ayrin Mackie, Stephen Patterson and Jennifer Rider-Shaw shone.

The rest of the production sacrificed the deployment of charm for the adoption of physical force. Whether at the hands of Griffin or Cimolino, the production was woefully miscast. This Night Music featured many of Stratford’s best actors from its musical and classical companies. However, the mix of acting styles that Griffin permitted tilted the world of the play in confounding ways.

Griffin seemed to have approached the musical as a farce rather than a comedy of manners. Characterizations were broad, and the humor was often played as slapstick. Performances were overwrought with Alexis Gordon’s Anne and Juan Chioran’s Count Malcolm bordering on caricature, exaggerated tediously for mere comic effect. As a result, a great deal of Hugh Wheeler’s sparkling and piercing dialogue landed without grace or impact.

Yanna McIntosh, a festival veteran who has dazzled in past production of classic plays, seemed out of her element as Desirée. Approaching the role very earnestly, McIntosh’s performance lacked finesse and charm. Had she been just a little more skillful at light comedy, it could have been wonderful. What we got, instead of a multi-dimensional artist engaged in one final, desperate and complex plea for love, was a tired middle-aged woman excited for one last roll in the hay.

Ben Carlson as Fredrik, Desirée’s long lost love now married to a virginal, giddy schoolgirl, brought earnestness to the swirling proceedings but never really established himself as the witless everyman transformed into a self-professed King Lear.

Cynthia Dale, a longtime leading lady in the musicals at Stratford, made an anticipated return to the company as Charlotte. Dale disappointed in her choice to downplay the stinging vitriol of a woman so desperate for her husband’s affection that she wields words as weapons only to regret her immorality and fight for redemption. As a result, Charlotte’s arc was flattened and the character’s importance in the musical was severely diminished.

Gabriel Antonacci, who did a fine job actually playing the cello while singing “Later,” imbued Henrik with a bundle of nervousness and uncertainty, but lacked the soulful search of a young man on the verge of self-discovery. Therefore, his rebuke to Desirée, accusing her of being bereft of the great truths of the artists, felt hollow and failed to propel the character (or the musical, for that matter) forward with any force.

Sara Farb delivered a carefully nuanced and powerful “The Miller’s Son,” but from the outset, she played Petra with such overt sexuality that the number failed to surprise or advance the character. Thankfully, Rosemary Dunsmore achieved the right calibration. Her Madame Armfeldt was a grand survivor in a world of fools — no-nonsense, stately, cutting and wise. 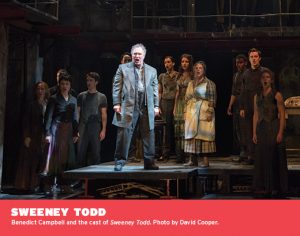 At the Shaw Festival in Niagara-on-the-Lake, Ontario, Canada’s other leading professional repertory theatre company, Artistic Director Jackie Maxwell finished her tenure with a bold and daring production of Sweeney Todd (July 17-Oct. 19, 2016). Like the musical itself, Maxwell’s staging of the opening “Ballad of Sweeney Todd” told the production’s tale of unrealized potential.

Maxwell and designer Judith Bowden set the production among the ruins of what appeared to be an abandoned warehouse in modern-day London. As two street youth entered the dilapidated space and began to deface it with graffiti, a startling explosion of steam, cued to the musical’s iconic high-pitched factory whistle, revealed characters from the story who appeared, ghost-like, from the past.

As the two roughnecks were forced downstage, lighting designer Alan Brodie provided perfect distraction as the rest of the company magically appeared as if finally unleashed from the prison of time. These moments were surprising, frightening and very effective. Coupled with the outstanding vocal work of the cast and the top-notch work from the Shaw Festival orchestra, these opening moments were spellbinding and spine-tingling.

But alas, the high hopes for the production that these moments promised were soon dashed as Sweeney Todd, played by Benedict Campbell more as a convivial grandfather than a deranged killer, lugubriously wandered onto stage from a set of stairs positioned in the down left corner of the house.

Following the opening “Ballad,” the production never found its footing. Campbell, an acclaimed member of the Shaw company, appeared overwhelmed by the vocal and musical demands of the role and never achieved clarity of character. Since the actor was unable to fully sustain the role while singing, we never really felt for Sweeney, especially in his climactic musical moments such as his “Epiphany” and the moment he realizes the fate of his beloved wife Lucy. Left without a wronged protagonist for whom we can empathize, Campbell’s Sweeney provided little to root for or feel.

Likewise, Corrine Koslo, another fine character actress with keen comedic instincts, was cast beyond her vocal power and range as Mrs. Lovett. In the case of both of these lead actors, the audience was brought to the edge of their seats pondering whether the singers could hit the notes and whether they’d make it through the four-month run.

In the shadow of these two performances, Marcus Nance’s captivating performance of Judge Turpin, replete with a stunning singing voice and imposing presence, left one wondering how much better the production might have been with him in the title role.

Other actors fared better. Kristi Frank’s sweet-voiced Johanna possessed all the right qualities of loveliness and vulnerability. Kyle Blair’s Pirelli was flamboyant and treacherous. Jeff Irving’s fine singing voice on Anthony’s “Johanna” delivered one of the production’s musical highlights, even though his dialect was mechanically delivered and his words nearly non-identifiable throughout the performance.

Likewise, Jay Turvey’s Beadle possessed a dialect that wavered between high British, cockney, Australian and American Southern in a confounding interpretation that severely undercut the character’s place in the social structure. Turvey’s choice to administer a modern, colloquial hand gesture behind the Judge’s back to express his frustration at having to escort the Judge to Sweeney’s parlor was astoundingly out of place. Andrew Broderick’s Tobias, overdrawn with shoulder and neck gyrations and a childlike, squeaky voice, seemed to belong to another world entirely.

By awarding inherently wrong roles to company stalwarts, Maxwell saddled her production in ways that the production ultimately could not overcome.

JOHN BELL heads the Division of Performing Arts at DeSales University in Pennsylvania.

Rick Pender, founding editor of Everything Sondheim, has created a brand new, … END_OF_DOCUMENT_TOKEN_TO_BE_REPLACED

“We had the same priorities.  We wanted to take the audience where we wanted to … END_OF_DOCUMENT_TOKEN_TO_BE_REPLACED

In 1997, Stephen Sondheim sat down with Library of Congress Senior Music … END_OF_DOCUMENT_TOKEN_TO_BE_REPLACED

Editor's note: Since the printing of this article, Sondheim is reportedly no … END_OF_DOCUMENT_TOKEN_TO_BE_REPLACED

Isn’t it rich? His career arc stretches from writing the lyrics for West Side … END_OF_DOCUMENT_TOKEN_TO_BE_REPLACED