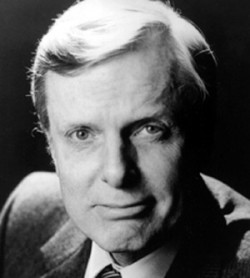 John McMartin, an actor with a flair for patrician roles, died on July 6, 2016. According to the New York Times, the cause was cancer. He was 86.

McMartin, whose stage career began in 1959 with an appearance in Little Miss Sunshine off-Broadway, scored one of his biggest career successes a dozen years later when he originated the role of Benjamin Stone, a former politician and current philanthropist (as well as philanderer) in Stephen Sondheim and James Goldman’s Follies. McMartin established Stone’s character as charming but world-weary, epitomized by the sardonic arrogance and aloof gentility that characterized many roles later in his career. In his New York Times review of Follies, Clive Barnes wrote: “John McMartin makes a rakishly and seedily convincing Ben.”

McMartin became indelibly linked with two of Sondheim’s songs from Follies, “The Road You Didn’t Take” and the show’s climactic “Live Laugh Love,” during which Ben suffers an emotional breakdown. In 2010, McMartin revisited the former song in the concert Sondheim: The Birthday Celebration at Avery Fisher Hall. While McMartin’s voice may have roughened with age, many felt his performance was more powerful than ever. McMartin was the last of the four leads in Follies to pass away; he was preceded by Dorothy Collins, Gene Nelson and Alexis Smith. 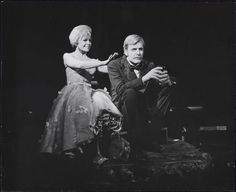 McMartin was Ben Stone in FOLLIES original production in 1971. Here he performs with Dorothy Collins as Sally Durant Plummer. (Photo by Martha Swope)

McMartin also played the dual role of the Narrator and the Mysterious Man in Sondheim’s Into the Woods when it returned to Broadway in 2002. As with his work in Follies, his performance in Woods combined humor and gravitas. For his work on this production, McMartin earned his fifth Tony Award nomination.

McMartin’s first nod from the Tonys came in 1966 when he played another role with which many identify him, the nebbishy Oscar in Cy Coleman, Dorothy Fields and Neil Simon’s Sweet Charity. It was a role that he reprised in the musical’s film version.

Other highlights of McMartin’s 55-year career on Broadway – over 25 shows – include performances in Tom Stoppard’s dark comedy Artist Descending a Staircase, the musical Grey Gardens (which began off-Broadway) and the most recent revival of Cole Porter’s Anything Goes. Off-Broadway, he appeared in works by authors ranging from Shakespeare to A.R. Gurney to Noah Haidle. His final outing on stage in New York came in 2014 when he played Georgia Senator Richard Russell in Robert Schenkkan’s All the Way.

McMartin was nominated for a total of five Tony Awards, but he never won. However, he did win a Drama Desk Award for his work in repertory productions of Eugene O’Neill’s The Great God Brown and Moliere’s Don Juan. (One of his Tony nominations was for Don Juan). These honors represent a signature of McMartin’s career: his ability to segue fluidly from musicals to straight plays. He also moved easily from stage — on Broadway, off-Broadway, and in regional theater — to the big and small screens, appearing in some 25 films and dozens of television shows. Highlights include guest starring five times on Law & Order, a quartet of appearances on Murder She Wrote, and an extended arc on the nighttime drama Falcon Crest in 1986. In addition to Sweet Charity, film credits include All the President’s Men and A Thousand Clowns. But it’s likely Follies for which McMartin will be best remembered – certainly by readers of Everything Sondheim.

Contributing Editor ANDY PROPST, founder of AmericanTheaterWeb.com, has written for such diverse publications as TSR, The Village Voice and Backstage. He is also the author of You Fascinate Me So: The Life and Times of Cy Coleman.

Rick Pender, founding editor of Everything Sondheim, has created a brand new, … END_OF_DOCUMENT_TOKEN_TO_BE_REPLACED

“We had the same priorities.  We wanted to take the audience where we wanted to … END_OF_DOCUMENT_TOKEN_TO_BE_REPLACED

In 1997, Stephen Sondheim sat down with Library of Congress Senior Music … END_OF_DOCUMENT_TOKEN_TO_BE_REPLACED

Editor's note: Since the printing of this article, Sondheim is reportedly no … END_OF_DOCUMENT_TOKEN_TO_BE_REPLACED

Isn’t it rich? His career arc stretches from writing the lyrics for West Side … END_OF_DOCUMENT_TOKEN_TO_BE_REPLACED