Fiasco wraps up its L.A. run of INTO THE WOODS with a party for anyone who ever played a part
BY TERRI ROBERTS

Fiasco Theatre Company’s touring production of Stephen Sondheim and James Lapine’s cautionary tale of wishes (and witches), Into the Woods, ended its month-long stay in Los Angeles on May 14, 2017, and moved on to Dallas. But before departing LA’s Ahmanson Theatre, the company celebrated its residency in the City of Angels with — what else? — a cast party. But since this pared-down production of Woods was performed Story Theatre style rather than in its typically lush and literal fashion, it was also not surprising that the company’s revelries might run to the singular side as well. 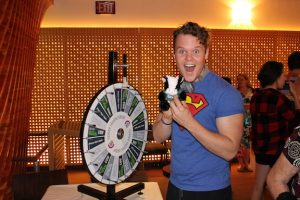 Eschewing the traditional definition of a cast party — a celebration for the cast and crew of a specific production at the end of the run of the show — the Fiasco fest cast a different spell on this theatrical ritual. An invitation was sent out summoning anyone who had ever performed any role in any kind of production of Into the Woods to attend the Saturday matinee on May 13, 2017, and afterward join the Fiasco company at a very special “cast” party, sponsored by BroadwayWorld. Many answered the call.

Young, old and in-between, they gathered in the Ahmanson Theatre’s Founders Room for a post-show event featuring fun, food and other festivities. Predictably, such luminaries as Bernadette Peters or Joanna Gleason were not there. Nor was Vanessa Williams, Meryl Streep or Johnny Depp. In fact, none of the guests in attendance were Broadway or movie stars — although those folks were invited. It did not matter. All who came were lovers of — and performers in — Woods who were graciously welcomed into that family-at-large. 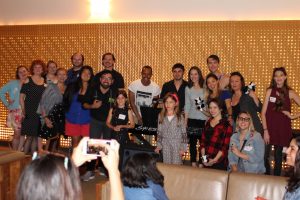 The cast of Fiasco’s Into the Woods with partygoers who have played roles in other productions. PHOTO BY CENTER THEATRE GROUP

First, they enjoyed a memorable performance of the Fiasco production, interrupted in the middle of “Agony” by a shrill fire alarm (presumably activated by accident) that stopped the show for about 10 minutes while stage management and crew got everything reset and restored. “Let’s hope you don’t remember that part,” quipped Rapunzel’s Prince Darick Pead when he and Cinderella’s Prince, Anthony Chatmon II, returned and rebooted the scene. The audience responded with huge laughter and tumultuous applause.

After the show, it was off to this invitation-only “cast” party.

Guests were greeted at the entryway by a large sign welcoming them to the Into the Woods “Cast” Party. Inside, they were issued labels indicating their name and the role they had played. A photo booth was available to make memories, and the table next to it was festooned with sparkly hats, feathers and headdresses, glittering crowns and more with which to adorn themselves for their pictures. 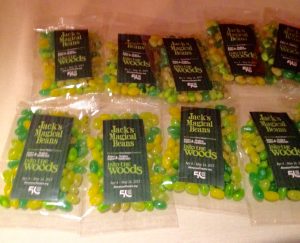 At another table across the room, guests could spin a wheel for the chance to win a Fiasco Woods prize: a magnet, a T-shirt or a small stuffed Milky White. The bar was open for drinks, and the food table offered a variety of chips and dips and yummy desserts. An added treat: nifty packages of Jack’s Magical (Jelly) Beans.

Of course there was music. An electric piano and microphone were set up for those who wished to perform one of their character’s songs, and everyone was invited to sing along. It was particularly delightful to see some of the pint-sized performers singing their hearts out and loving the spotlight. Judging from the strong quality of all the voices and the enthusiastic renditions of songs, a case could certainly be made for a high-quality local production of the show to satisfy those who missed the Fiasco version. (Or for those who just can’t get enough of wandering the the Woods!)

Members of the Fiasco company mingled and chatted with their new Woods friends, posed for photos and shared show stories. The Into the Woods “Cast” Party lasted about an hour. After all, the Fiasco actors had another show that evening, followed by a Sunday matinee. Then they hit the road to Dallas. For this touring company, the party was over and it was time, once again, to take another journey.

Rick Pender, founding editor of Everything Sondheim, has created a brand new, … END_OF_DOCUMENT_TOKEN_TO_BE_REPLACED

“We had the same priorities.  We wanted to take the audience where we wanted to … END_OF_DOCUMENT_TOKEN_TO_BE_REPLACED

In 1997, Stephen Sondheim sat down with Library of Congress Senior Music … END_OF_DOCUMENT_TOKEN_TO_BE_REPLACED

Editor's note: Since the printing of this article, Sondheim is reportedly no … END_OF_DOCUMENT_TOKEN_TO_BE_REPLACED

Isn’t it rich? His career arc stretches from writing the lyrics for West Side … END_OF_DOCUMENT_TOKEN_TO_BE_REPLACED