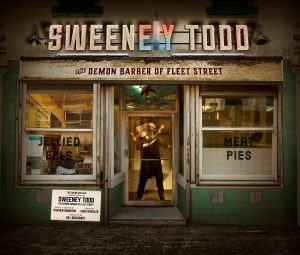 In New York City, the Barrow Street Theatre production of Sweeney Todd (running until at least Dec. 31, 2017) truly extends beyond the normalcy of the fourth wall. More than an immersive experience — cozying theatergoers in Mrs. Lovett’s pie shop next to the Demon Barber himself — the audience gets fed, too. Luckily for them, the pie and mash is served before the show.

Transferring from London’s West End (March 12-May 16, 2015), and before that, having opened at that city’s Tooting Arts Club (Oct. 21-Nov. 29, 2014), this acclaimed Sweeney production is has brought more than just meat pies. In fact, it brought the whole pie shop.

Originally, this production was housed in a real shop, Harrington’s Pie and Mash shop in Tooting, England. From 9 a.m. to 5 p.m., the shop was open for business, serving customers. The minute the doors closed, the creative team went to work. “From an aesthetic point of view,” says the scenic and costumer designer Simon Kenny, “it was really important that everything we designed into the show looked like it could have already been there. We didn’t want it to look like we just brought a set in.”

Much of the design had already been established — and much admired — by the crew. Harrington’s, which was, in detail, recreated for its West End run and has been brought to life once again at Barrow Street, had maintained quite a bit the structure and century-old qualities from its grand opening in 1907. (The shop is currently under renovation.) Kenny found himself with an interesting dilemma for a story where quite a bit of “machinery” is expected, including the infamous chair that drops bodies down a flight. The crew couldn’t dig holes or blow out walls or build elaborate pieces. (Of course, knowing how this Sweeney-centric objective was staged is a surprise for the audience. No spoiler alerts here.)

Luckily, the tiny shop, according to Kenny, became a character itself, quirks and all. To his delight when audience members walked into the shop, some would ask with slight confusion, “So, where will the show take place?”

“That was sort of the perfect complement, really,” he says. “We wanted it to feel like it would just grow organically within the space we were in. The first time around, it was about making the design as invisible as possible so that everything was there when it was needed, or everything almost looked like it belonged in that building.”

“When I first visited the pie and mash shop to think about how I was going to stage the show, I was immediately drawn to the idea of making the audience feel as if they’d stumbled into Mrs. Lovett’s pie shop,” says director Bill Buckhurst. 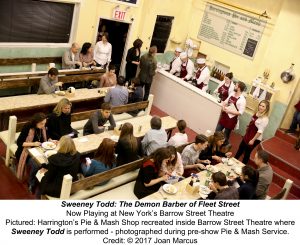 The new challenge, when it came to transferring the show from a space that held 32 audience members (not to mention eight actors and three musicians) to a location that held about 70 and now to a theater that seats roughly 70 as well, was about maintaining the authenticity of the original set and that “happening upon Mrs. Lovett’s shop” sense for the audience.

Buckhurst wanted to make to certain that, for the incoming New York production, all design originality from the first two incarnations would remain. The Barrow Street version is slightly larger, but the intimacy and atmosphere have been retained.

Intimacy is as much an important designed element of this production as the space itself. Buckhurst and Kenny wanted to ensure that audience members were very much part of this production. Beyond having the actors speak directly to spectators throughout the show, Buckhurst says those sitting and watching have just as much blood on their hands as Sweeney and Lovett. He was intrigued by using the small space and the “subsequent possibility of making [the audience] feel almost complicit as the story escalates. Perhaps a story like Sweeney Todd works particularly well in an immersive environment because the audience’s proximity to the action enhances the atmosphere of tension and drama that is already so palpable in the piece.”

The close-up, almost interactive nature of this show is something that Stephen Sondheim enjoyed when he saw it in London. Rumor has it, according to Kenny, that during the closing performance at Harrington’s, not only were actors often in Sondheim’s face delivering lines and singing his lyrics, but one knocked over his drink. 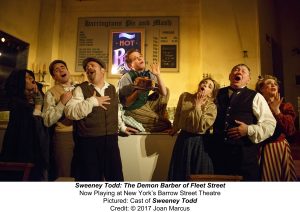 “It’s a scary experience, but in a fun, thrilling way,” said Kenny. “Once you buy into the idea that we set Sweeney in a pie shop, there’s something about it that inherently works. It’s a strange thing.”

Everything Sondheim’s Associate Editor JOSH AUSTIN is the publication/website content editor for Actors’ Equity Association. He earned his master’s degree in arts journalism at Syracuse University.

Rick Pender, founding editor of Everything Sondheim, has created a brand new, … END_OF_DOCUMENT_TOKEN_TO_BE_REPLACED

“We had the same priorities.  We wanted to take the audience where we wanted to … END_OF_DOCUMENT_TOKEN_TO_BE_REPLACED

In 1997, Stephen Sondheim sat down with Library of Congress Senior Music … END_OF_DOCUMENT_TOKEN_TO_BE_REPLACED

Editor's note: Since the printing of this article, Sondheim is reportedly no … END_OF_DOCUMENT_TOKEN_TO_BE_REPLACED

Isn’t it rich? His career arc stretches from writing the lyrics for West Side … END_OF_DOCUMENT_TOKEN_TO_BE_REPLACED