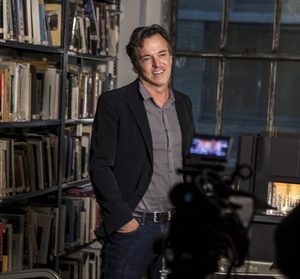 Everything Sondheim: In 2002 you designed six Sondheim shows in one summer for the Kennedy Center Sondheim Celebration.

EvSo: How exactly did it work? Were all the productions in the same theater?

McLane: Yes, they were all in the same theater. There were two repertories — an “A” rep and a “B” rep. Three shows played in rep. When that rep closed, there was a second rep of three shows. What it meant was once we got them all open, there were a couple of weekends when, as an audience member, you could go to Washington and go to the Kennedy Center and see all three of the productions in the repertory playing at that time.

EvSo: Were the shows originally slated to take place in separate theaters, or was the plan always to have all six productions in the same theater?

McLane: The plan was always for them all to take place in the same theater.

EvSo: So you had to switch sets.

EvSo: How long did that take?

McLane: Well, when they had to do a matinee and an evening show, they had to switch in about two hours.

EvSo: That must have put some restrictions on you as a designer.

McLane: It did, yes, but not as many as you might think. It didn’t look particularly stripped down. They looked like full productions.

EvSo: It must have taken quite a large crew to switch sets.

McLane: They had a very big crew because they had to work so quickly.

EvSo: Were there any demands that these particular shows placed on you because of the limitations of the theater space?

McLane: I suppose that was the major thing — that the sets had to be changed in two hours. But there’s quite a bit you can do within that restriction. One of the things I did was design a deck that had automation. That deck had to be the same for all six shows, so anything that moved on the floor had to get moved by that same automation deck. That was a bit of a limitation, but not a terribly difficult one. And then, of course, there’s the budget, which is always a limitation on any project.

EvSo: Was it a particularly small budget?

McLane: No, in fact it was a pretty healthy budget, but of course you always run up against the edges of it.

EvSo: Were there any other similarities in the ways you approached the sets? For example, were any other parts reused?

McLane: Not really. We did have a common show curtain that was used for everything. It was a very simple, flat blue curtain that had Stephen Sondheim’s signature painted on it in white. But otherwise everything was pretty different. I met with Sondheim and Michael Kaiser, then the president of the Kennedy Center, and Max Woodward, the producer, and the directors of all six shows.

EvSo: Were there six directors?

McLane: There were actually four directors; two of them directed two shows each. I met with all of these people, and one of the questions I posed was, “What are the common themes that these shows have, and is there sort of a commonality to the worlds of all these shows?” Sondheim ended that conversation very quickly by saying, “No, there is no commonality. These six shows have absolutely nothing in common except that I happened to write the scores for each of them. They have different book writers and different ideas, and you guys should make them as different as possible.”

EvSo: Did that feel restrictive or expansive in terms of your work?

McLane: It was very liberating, to be honest. It was great.

EvSo: So what was the best part about designing these sets?

McLane: For me, just getting to know those six pieces so well was really pretty thrilling. That was a real highlight. You know, I’ve continued to design a number of other Sondheim shows since then. I think now I’ve designed a total of nine Sondheim shows. Of those nine, a couple of them I’ve designed more than once. A few of those six shows I’ve designed again since the Kennedy Center productions, so that’s also been fun to revisit them.

EvSo: Were there any similarities among the concepts of these shows that you have designed more than once?

McLane: No, I approached them really differently.

EvSo: Had you worked with any of the four Kennedy Center directors before?

McLane: Yes, I had worked with all of them.

EvSo: So you had a working relationship with those directors already?

McLane: Yes, which was great.

EvSo: How much time did you have to design all six sets?

McLane: About nine months. I had a pivotal meeting for the project, which was to decide whether to do it or not. It was on Sept. 11, 2001, first thing in the morning. The meeting was cut short by the historic terrorist attacks, but basically that moment was when I got started on it.

EvSo: Did you work on the shows all at once or one at a time?

McLane: I would do a little bit of work on one; then I’d go work on another one. I’d get stuck on one of them, and I couldn’t figure out what to do, so I would go work on the other ones. While I was working on the other ones, usually it would help me get unstuck on the first one.

McLane: Eric Schaeffer was the artistic director. He and Michael Kaiser decided, based on what was a good balance. You know, some of the shows are more popular than others, and so I think inevitably what they tried to do was balance the best-known shows with the lesser-known shows during the rep in a specific weekend. That exposed the audience to pieces they might not otherwise be exposed to.

EvSo: Which was the most challenging show to design?

McLane: They were all challenging in different ways. I would say Merrily We Roll Along was probably the most challenging for me, and I think it’s also the most challenging piece. I don’t think we completely solved it, either in the design or the conception. I’m not sure anybody has quite done that with that show yet. You know, it’s a very difficult piece, so in a way, that remained a challenge right to the end. Also, a lot of overcome that and come up with my own idea that was different. In some cases that was difficult initially. Those were such superb productions with such superb designs, so in a way that was a burden. But I ultimately did feel like I got past that.

EvSo: Which show was the easiest to design?

McLane: I suppose Passion was because it had the fewest expectations. Also, Eric Schaeffer, who directed it, had a very clear idea of what it should feel like. That was very helpful. It was ultimately very simple, a simple idea, so I feel like I hit on that set pretty quickly.

EvSo: Passion was probably one of the shows with which the audience was less familiar as well.

McLane: Exactly, which made my job easier.

EvSo: Because there were no great expectations placed on it to match a big Broadway production?

EvSo: Well, thanks for your time.

McLane: Of course, it was my pleasure.

Rick Pender, founding editor of Everything Sondheim, has created a brand new, … END_OF_DOCUMENT_TOKEN_TO_BE_REPLACED

“We had the same priorities.  We wanted to take the audience where we wanted to … END_OF_DOCUMENT_TOKEN_TO_BE_REPLACED

In 1997, Stephen Sondheim sat down with Library of Congress Senior Music … END_OF_DOCUMENT_TOKEN_TO_BE_REPLACED

Editor's note: Since the printing of this article, Sondheim is reportedly no … END_OF_DOCUMENT_TOKEN_TO_BE_REPLACED

Isn’t it rich? His career arc stretches from writing the lyrics for West Side … END_OF_DOCUMENT_TOKEN_TO_BE_REPLACED