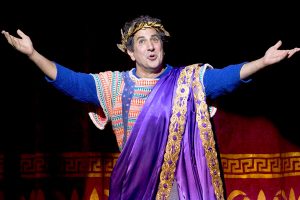 Frank Ferrante played Pseudolus and directed Walnut Street Theatre’s Philadelphia production of A Funny Thing Happened on the Way to the Forum.                PHOTO BY MARK GARVIN

Burt Shevelove informally referred to A Funny Thing Happened on the Way to the Forum, the 1962 Stephen Sondheim musical he co-authored with Larry Gelbart, as “A Scenario for Vaudevillians.” It’s only fitting that an internationally known impersonator of legendary vaudevillian Groucho Marx, Frank Ferrante, would essay the role of Pseudolus for Walnut Street Theatre in Philadelphia (Sept. 5-Oct. 22, 2017). Did Ferrante supply enough energy and anarchy to keep the show flying? You bet your life. 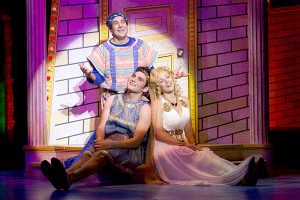 Ferrante’s delivery of “Pretty Little Picture” and the second-act reprise of “Lovely” sounded the most Groucho-esque, Ferrante drawing extra laughs during the latter by biting one of the Roman columns in an effort to restrain himself. During an audience talkback following the Sept. 17, matinee, Ferrante described what he visually brought to the production, calling the show “a burlesque from which the Marx Brothers and the (Three) Stooges and Phil Silvers all emerged. I love this proscenium arch — it was my idea (…) like we were walking back in time to the ’20s and ’30s with the footlights and the main curtain. We’re celebrating that style. That’s why you see the Stooges and the Marxes and the Milton Berle [turned-foot] walk (…) It’s a tradition that we’re all part of.” Mary Martello, who played Domina, added, “Everything I know I learned from watching I Love Lucy or Bewitched.”

There were also clever visual bits from the Proteans who, when announcing the impending arrival of Miles Gloriosus, performed elaborate comic salutes and hand gestures. One Protean also brandished a Harpo Marx-like horn in “Comedy Tonight,” during which a prosthetic leg popped up. The sight gags helped propel the relentless action of Pseudolus scheming to earn his freedom

The highlight of the Sept. 17 matinee came when Scott Greer, as Hysterium, accidentally called Ferrante “Hysterium.” Ferrante quickly reached out to the first row of the audience, grabbed a Playbill and recited the names of the characters, reassuring the theatergoers with, “One more rehearsal and we’ll be running!”

As the exasperated Senex, Ron Wisniski contributed a voice somewhere between W.C. Fields and Walter Matthau and more than held up his end of the duet “Impossible.” His aside to the audience, “Never fall in love during a total eclipse,” went over particularly well in the aftermath of the Aug. 21, 2017, solar eclipse. Martello as wife Domina — a character who might have easily been portrayed on film by Margaret Dumont — drew solid laughs throughout the show, including Act II’s “That Dirty Old Man” where she alternately strangled and hugged Hysterium. 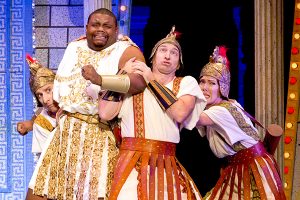 Nichalas A. Parker played Miles Gloriosus, with the support of the Proteans. PHOTO BY MARK GARVIN

Alanna J. Smith as the breathless and clueless Philia scored with Act I’s “Lovely.” Brandon O’Rourke gave a solid performance as Hero, even though his character had conspicuously less to do in the second act. Bill Van Horn’s Erronius was lovably addled, Greer was appropriately tense as Hysterium, and Fran Prisco proved a worthy Lycus. Ferrante, Greer, Wisniski and Prisco’s “Everybody Ought to Have a Maid” stopped the show — as always. The Walnut Street production should also be noted for its gender- and colorblind casting: One of the Proteans was played by a woman (Jennie Eisenhower), a male dancer (Billy D. Hart) portrayed the courtesan Gymnasia (displaying Michelle Gaudette’s effective choreography) and Miles Gloriosus was played by an African American (Nichalas L. Parker). 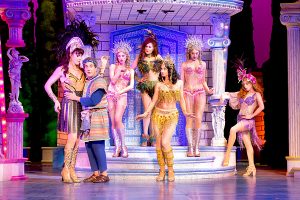 Pseudolus (Frank Ferrante) and the girls.      PHOTO BY MARK GARVIN

While critics and historians have long associated Sondheim shows with the plotless, “concept” musical, Forum is but one of several works — including West Side Story, Sweeney Todd and Into the Woods — with a heavily plotted libretto. The Philadelphia audience had little trouble following the story thanks in part to Robert Andrew Kovach’s spare scenic design, with the houses of Lycus, Senex and Erronius spaced sufficiently apart onstage. John Daniels’ strong conducting of the 11-member orchestra also complemented the production.

No matter how chaotic the outside world can get, one can always count on Forum’s convoluted plot to satisfyingly resolve itself in time for the final curtain. Ferrante’s expert acting and direction made Philadelphia’s staging a production to remember.

ANDREW MILNER contributed a chapter to Stephen Sondheim: A Casebook (Garland Press, 1997) and regularly wrote book and music reviews for the Philadelphia City Paper for 20 years.

Rick Pender, founding editor of Everything Sondheim, has created a brand new, … END_OF_DOCUMENT_TOKEN_TO_BE_REPLACED

“We had the same priorities.  We wanted to take the audience where we wanted to … END_OF_DOCUMENT_TOKEN_TO_BE_REPLACED

In 1997, Stephen Sondheim sat down with Library of Congress Senior Music … END_OF_DOCUMENT_TOKEN_TO_BE_REPLACED

Editor's note: Since the printing of this article, Sondheim is reportedly no … END_OF_DOCUMENT_TOKEN_TO_BE_REPLACED

Isn’t it rich? His career arc stretches from writing the lyrics for West Side … END_OF_DOCUMENT_TOKEN_TO_BE_REPLACED