ASSASSINS at Yale Rep: Through a very clear glass, darkly and knowingly
BY DONALD P. GAGNON 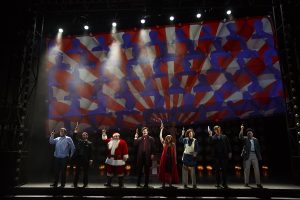 In the wake of the most recent election cycle, there seems to be “another national anthem” playing for many disenfranchised and marginalized Americans. If only for that reason, Yale Rep’s spring production of Stephen Sondheim and John Weidman’s Assassins (March 17-April 8, 2017) was not only timely but also troubling. However, James Bundy’s production went far beyond timeliness. Indeed, Bundy and his company crafted their production with exceptional narrative and thematic clarity, relying on the words, music and an unsettlingly contemporary subject, rather than a showy or revisionist production concept, to relay how easily the American Dream — or myth — can be misinterpreted by a few to the detriment of all.

Much of that clarity derived from Bundy’s brisk, spare staging. An upstage wall of stadium lights resonated with the idea in Sondheim’s lyrics that this ragtag collection of American misfits is trying to get into “the ballpark,” where their dissonant version of a national anthem is being played — they hope. Above the stage hung an ominously tilted screen, sometimes projecting the lower half of the American flag, sometimes reflecting visages of the presidential victims, sometimes gleefully, sometimes terrifyingly depicting narrated events, perhaps most disturbingly in its use of the Zapruder film of John Kennedy’s assassination in Texas.

A pair of LED screens on each side of the proscenium served a similar purpose, providing images and ironic commentary on otherwise tricky dramatic moments. When Charles Guiteau, James Garfield’s assassin, played winningly as a grinning but determined lunatic by Stephen DeRosa, made his way to the top of the pillory, noose around his neck, and the hangman pulled a lever, the lights dropped out and an animated silhouette of the resultant hanging appeared. The screens also showed recreations of historical newspaper headlines and other atmospheric, period-specific images. In addition to being an effective way to dramatize events that might be difficult to stage, the screens relieved the director from having to fill the stage with anything other than the most basic of set pieces: some chairs, a table, a few boxes of books, all moved easily and quickly on- and offstage. The result did not seem like a “stripped-down” staging. Rather, it allowed the characters and the stories to remain the focus of the often grim, sometimes riotous, proceedings.

In fact, this production emphasized, even reveled, in that uneasy, sometimes disturbing co-existence of comic mayhem and spiritual angst in the midst of the long, dark night of the national soul. Much criticism of the original production and its Broadway revival derived from what some critics felt was an inappropriate, even disrespectful attempt to blend the two. This production embraced that tonal dichotomy to full effect. While much explosive laughter was honestly earned, especially in the performances of Lauren Molina as an obsessive-compulsive Squeaky Fromme and Julia Murney as a bi-polar Sara Jane Moore, much laughter in other scenes was clearly troubled. When Fred Inkley, as the funniest Gerald Ford since Chevy Chase, tripped and fell amid the bullets spilled on the ground that were intended for him, the audience roared. When Lucas Dixon’s lumpish, dour John Hinckley asked Dylan Frederick’s evasive Lee Harvey Oswald for an autograph, the initial burst of laughter seemed to choke on growing lumps in audience members’ throats.

Only one of several scenes in which the grotesque nature of the action was amplified even as it was played for laughs, this climactic scene focused on Oswald perhaps most successfully demonstrated the validity of Bundy’s interpretation. The subject matter was best served by embracing the tonal discrepancy between horror and humor, rather than trying to blunt the edge of either or mask the growing horror with distracting effects, set pieces or conceptual impositions.

Despite the fragmentary nature of the show — no literal narrative exists except for the impressionistic, non-linear layering of historical events to provide a recognizable link among the dissatisfied American dreamers at its center — Bundy relied on a handful of effective staging ideas to create cohesiveness from seeming chaos. The character of the shooting gallery Proprietor, played with knowing menace by Austin Durant, was a constant presence, handing Hinckley a guitar, pulling the switch to electrocute Giuseppe Zangara (sung with astonishing diction by Stanley Bahorek), handing a bottle to P.J. Griffith’s bitter, melancholy Leon Czolgosz of, and finally throttling the preening Balladeer in “Another National Anthem,” after the assassins, newly bonded and empowered across the ages, first ignored and then threatened the singer. As such, the “Proprietor” created coherence to the evening’s proceedings, just as the vainglorious John Wilkes Booth, played by Robert Lenzi, crafted cohesiveness among his cache of diffuse, desperate dreamers.

The omnipresence of the off-kilter American flag looming above the action added a degree of scenic unity to an otherwise bare stage. Bundy’s choices to allow the words and music to resonate, unencumbered by any disruptively oppressive directorial concept, indicated his trust in the material and in his performers, both of which were rewarded.

While the titular assassins may have lived lives of quiet desperation — at least until their final, desperate acts — Assassins itself speaks loudly to the wounded spirit of a nation — any nation — that finds itself at war between its vision of itself and its disappointing reality. Yale Rep’s production confronted that cognitive disconnect stirringly, confident in the troubling, contemporary nature of the subject matter, as well as the elements of the theatrical event itself that conveyed the cautionary tale of what happens when a citizenry loses sight of and confidence in the promises of its leaders.

In his notes, director James Bundy described how the audience could see the assassins reflected in contemporary media. Perhaps that is the most telling statement of why this production struck such a resonant, if dissonant, chord: It forced the audience to look at itself through a very clear glass, darkly and knowingly.

Rick Pender, founding editor of Everything Sondheim, has created a brand new, … END_OF_DOCUMENT_TOKEN_TO_BE_REPLACED

“We had the same priorities.  We wanted to take the audience where we wanted to … END_OF_DOCUMENT_TOKEN_TO_BE_REPLACED

In 1997, Stephen Sondheim sat down with Library of Congress Senior Music … END_OF_DOCUMENT_TOKEN_TO_BE_REPLACED

Editor's note: Since the printing of this article, Sondheim is reportedly no … END_OF_DOCUMENT_TOKEN_TO_BE_REPLACED

Isn’t it rich? His career arc stretches from writing the lyrics for West Side … END_OF_DOCUMENT_TOKEN_TO_BE_REPLACED