EXCLUSIVE COVERAGE FOR EVERYTHING SONDHEIM BY MARK SHAIMAN AND JIM SCHNEIDER 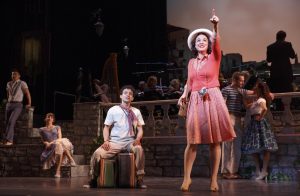 It’s been 51 years since the Leona of Do I Hear A Waltz? went to Venice to cry, but the (May 11-15, 2016) revival at New York City Center’s Encores! is a reason for the Sondheim fans who made it to the production to rejoice. While Do I Hear A Waltz? will not be on any critic’s Top Ten list, getting to see it staged was a noteworthy experience. With a large orchestra onstage and the performers playing their roles with enthusiasm and skill, this production enabled the audience to enjoy a rarely-heard score that combines the soaring melodies of Richard Rodgers and the witty lyrics of Sondheim.

Do I Hear A Waltz? is based on Arthur Laurents’s 1952 play The Time of the Cuckoo (later followed by Summertime, a 1955 cinematic adaptation directed by David Lean and starring Katherine Hepburn and Rossano Brazzi). For Encores! Melissa Errico played Leona Samish, a Midwestern spinster who visits Venice with the hope of finding romance. She does, in the guise of Renato (Richard Troxell), a shopkeeper who, although married, begins a liaison with Leona.

The plot is complemented by Senora Fioria (Karen Ziemba) who manages the pension where Leona stays; Eddie and Jennifer Yeager, a young American couple (Claybourne Elder and Sarah Hunt) looking to find a way to keep their marriage together; Mr. and Mrs. McIleney, two American tourists (Nancy Opel and Richard Poe) who provide comic relief; and Giovanna, the maid (Sarah Stiles) who is less than excited about her duties. Dancers float on and off the stage, often during transitional moments.

In this production, Errico, a veteran of the Encores! series, played the leading lady with a combination of vulnerability and steeliness. Her first song, “Someone Woke Up,” ended with her falling into a Venetian canal. Errico was outstanding, her voice clear and strong, especially when singing the title song, one of Rodgers’ finest waltzes. She also introduced “Everyone Loves Leona,” a song that was cut during out-of-town tryouts. She was matched by Troxell, an opera star, impressive in his humorous number, “Bargaining,” and even more so in three ballads, “Someone Like You,” “Stay” and “Take The Moment,” the last of which movingly ended the first act.

Ziemba, another returning Encores! star, was terrific, making fun of an international bevy of tourists in “This Week Americans.” “We’re Gonna Be All Right,” the cynical song performed by Elder and Hunt that’s been included in many Sondheim tributes, was the complete version. (A much truncated version was performed in the original production.) Stiles played Giovanna the maid as deadpan as you get, often provoking laughs from the capacity crowd. Also notable was the song “Thank You So Much,” sung by the main characters, which concluded the show. In the final moment, we saw Leona, surrounded by dancers waltzing to the title song, staring out into Venice and feeling both sorry and grateful for her Italian experience.

The matinee performance on Saturday, May 14, 2016, was followed by a question-and-answer session attended by a majority of the cast, as well as director Evan Cabnet and Ted Chapin, head of the Rodgers and Hammerstein organization; Jack Vertiel, head of the Encores! series; and musical director Rob Berman. In the audience were several members of the original 1965 cast: Fleury Antonakis, who played Giovanna, and Christopher Votos, who played Vito.

Chapin spoke of initiating the project. Once Sondheim agreed, it was he who chose Cabnet to direct. According to Cabnet, when Vertiel called him and said that “Steve” had suggested him, Cabnet was a bit mystified wondering who “Steve” was — not realizing that anyone would refer to him as anything other than Mr. Sondheim! Nor was he aware that Sondheim had attended any of his previous productions, such as the acclaimed 2015 staging of Branden Jacobs-Jenkins’s Gloria at the Vineyard Theatre. He also staged the 2015 Broadway production of Thérèse Raquin for Roundabout Theatre Company. (Editor’s Note: Shortly after the Encores! production, Cabnet was named artistic director of Lincoln Center’s new-works arm, LCT3.)

Along the same lines, Errico said that, during a rehearsal, she came onstage and Sondheim was right in front of her. Although she had met him before, she still had to catch her breath in the presence of “God” (as she put it).

When she asked Sondheim if she had gotten the role right, he replied “You were wonderful — most of the time.” His one major suggestion was to find one line in the party scene and make that the moment when she changes and becomes unhinged. “Make the audience hate you,” Sondheim advised. Errico chose the line “Where’s the damn music?” appropriate because Leona believes that when she falls in love she will hear a waltz — thus the show’s title song.

To conclude the talk, Chapin made the point that, although the working relationship between Rodgers and Sondheim was difficult, five years later when Company premiered Rodgers sent Sondheim a complimentary letter.

Everything Sondheim: When you first approached Do I Hear A Waltz? what attracted you to this project?

Rob Berman: I was always fascinated by this one-time collaboration of Rodgers and Sondheim. There has been plenty written about how the two didn’t work well together, but let’s not forget they are both masters and there is so much skill and craft in this score.

EvSo: Why do you believe that few productions of the show have been produced in the last 50 years?

Berman: It’s a tricky piece to pull off. It requires great casting and sensitive direction and staging. I think the perception of the piece is that it never quite worked and that it’s more of a curiosity.

EvSo: How do you obtain original orchestrations when the show has not been produced for so long?

Berman: In this case, Rodgers and Hammerstein licenses the original orchestrations along with the show. Our friends there were kind enough to give us access to the original pit parts and Ralph Burns’s original manuscript scores for reference.

EvSo: Do you see any changes in the relevance of the show from its opening until now?

Berman: The show must have felt quite modern in 1965 with its topics of romance outside of marriage and sexual ethics. These are topics Sondheim would continue to explore in his musicals of the early 1970s. The piece still resonates today with its depiction of a leading character who has a fundamental inability to connect emotionally and romantically. She sabotages her own chances, and this nuanced psychology still feels modern.

EvSo: Have you made any changes in the score, for example, in the “We’re Gonna Be All Right” lyrics? Will there be additions to the score that were not previously heard?

Berman: Our production uses a script that incorporates some elements of Arthur Laurents’s later revision of the show. But we are playing the 1965 score, including restoring the song “Everybody Loves Leona” which had been written and orchestrated for the original production but was cut at some point before opening. As for “We’re Gonna Be All Right,” we are restoring Sondheim’s original lyrics, which are more pointed and cynical than the ones that ended up in the show and on the original cast recording.

EvSo: Did Sondheim or others give you or the cast any insights or notes that made a difference in your approach to the material?

Berman: Sondheim consulted with us on casting and gave us some initial advice. He came to our dress rehearsal and offered a few notes and suggestions. He seemed genuinely touched to see the show again in such a complete form after all these years.

EvSo: What are the challenges of presenting a production with such a short turnaround?

Berman: After 23 years, we have a pretty sturdy system of mounting shows at Encores! but it always has its challenges. In the case of Waltz, we had the advantage (from a practical standpoint) of there being almost no choral singing, so that saved us quite a bit of time in rehearsal. But there is more than the usual amount of detailed and difficult scene work. Evan Cabnet had to spend a lot of time with the cast working on the scenes.

EvSo: Please describe your approach to this show and other Encores! performances.

Berman: We always try as best we can to put the audience in a time machine and, as much as possible, let them experience what the original productions of these shows probably sounded like,

MARK SHAIMAN and JIM SCHNEIDER are editors for small press publications as well as bridge partners. They continue to be inspired by anything Sondheim.

Rick Pender, founding editor of Everything Sondheim, has created a brand new, … END_OF_DOCUMENT_TOKEN_TO_BE_REPLACED

“We had the same priorities.  We wanted to take the audience where we wanted to … END_OF_DOCUMENT_TOKEN_TO_BE_REPLACED

In 1997, Stephen Sondheim sat down with Library of Congress Senior Music … END_OF_DOCUMENT_TOKEN_TO_BE_REPLACED

Editor's note: Since the printing of this article, Sondheim is reportedly no … END_OF_DOCUMENT_TOKEN_TO_BE_REPLACED

Isn’t it rich? His career arc stretches from writing the lyrics for West Side … END_OF_DOCUMENT_TOKEN_TO_BE_REPLACED