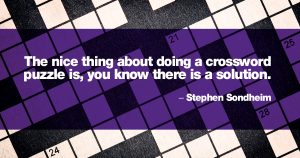 How to Solve Cryptic Crosswords

Stephen Sondheim’s love of puzzles is widely known and deeply rooted. Biographer Meryle Secrest writes of Sondheim’s realization that this affinity dates from childhood, with the failure of his parents’ marriage, when “nothing made sense any more”. As he later noted in a 2005 interview: “Art, in itself, is an attempt to bring order out of chaos, and certainly puzzles [are too]…The nice thing about doing a crossword puzzle is you know there is a solution. I also like murder mysteries for the same reason…where you know that it’s all going to be neatly wound up at the end and everything’s going to make logical sense…It’s a defense against chaos.”

But if there is solace in taming the chaos, there are apparent pleasures in creating it too. Sondheim’s scriptwriting collaborations on The Last of Sheila and Getting Away with Murder are diabolical, intricately plotted murder mysteries. The shocking revelation of the Beggar Woman’s identity at the end of Sweeney Todd wouldn’t be nearly as satisfying if Sondheim and Hugh Wheeler hadn’t left sufficient clues so that you might have figured it out for yourself.

Among Sondheim’s least-known compositions are the 42 cryptic crossword puzzles he devised for New York magazine, starting with the magazine’s first issue in 1968. These are crosswords of the “British” variety, fiendishly difficult and time consuming. As Sondheim describes them in the introduction to his 1980 published collection: “This kind of puzzle offers cryptic clues instead of bald definitions, and the pleasures involved in solving it are the deeply satisfactory ones of following and matching a devious mind (that of the puzzle’s author) rather than the transitory ones of an encyclopedic memory.”

Everything Sondheim is delighted to present puzzles in “the Sondheim tradition”, starting with this one by Mark Halpin. A scenic designer and professor, Halpin has created over 25 Sondheim-themed puzzles, first appearing in The Sondheim Review. His work has been hailed as “wonderfully ingenious” by none other than Sondheim himself! So sharpen your Blackwing pencil, and good luck. Even if you aren’t able to “Finish the Hat”, hopefully you will arrive at more than a “Seven-Per-Cent Solution”.

— GALEN FOTT is an animator, actor, and author based in Nashville.

Rick Pender, founding editor of Everything Sondheim, has created a brand new, … END_OF_DOCUMENT_TOKEN_TO_BE_REPLACED

“We had the same priorities.  We wanted to take the audience where we wanted to … END_OF_DOCUMENT_TOKEN_TO_BE_REPLACED

In 1997, Stephen Sondheim sat down with Library of Congress Senior Music … END_OF_DOCUMENT_TOKEN_TO_BE_REPLACED

Editor's note: Since the printing of this article, Sondheim is reportedly no … END_OF_DOCUMENT_TOKEN_TO_BE_REPLACED

Isn’t it rich? His career arc stretches from writing the lyrics for West Side … END_OF_DOCUMENT_TOKEN_TO_BE_REPLACED