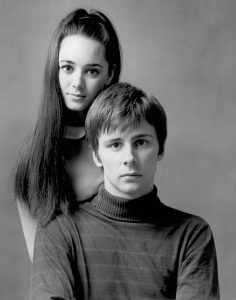 Mallory and Peterson in 1968 (photo by Kenn Duncan)

When Kurt Peterson and Victoria Mallory walked onstage at New York City Center on Sunday, April 29, 2012, it was a joyous reconnection to present a concert they called When Everything Was Possible. After more than four decades they were together again, singing and reminiscing about the early years of their careers when they intersected for a pair of noteworthy productions: the Lincoln Center 1968 revival of West Side Story in which they played Tony and Maria and the original 1971 production of Follies (he was Young Ben and she was Young Heidi). In 1969 Peterson had originated the role of Julian in Jerry Herman’s Dear World, opposite Angela Lansbury. The premiere of A Little Night Music in 1973 featured Mallory as the original, virginal Anne Egerman.

The 2012 evening at City Center was envisioned as the first step of a late-in-life series of events for Peterson and Mallory, including a studio recording and a tour. Their purposeful reconnection was a chance to celebrate the magical chemistry they had experienced early in their careers.

Their concert was a success, but the further plans didn’t happen: In fact, the concert was Mallory’s final stage appearance. Just two years later, following a brief battle with pancreatic cancer, she died at age 65 on Aug. 30, 2014.

Luckily, their 2012 performance was recorded. It’s not the tour they had planned, but the recording, released in May by Ghostlight Records, vividly recreates their chemistry and good humor before a live audience, boisterously cheering and applauding their recollections and performances. The 70-minute recording puts listeners squarely in the audience enjoying the work of these two happy singers. Own this recording and you can plug into their good-natured banter — Peterson more than once admits he was jealous of Mallory’s success — and easy performances.

Between songs the duo reminisce about the chronology of their careers from being kids arriving in New York for a summer 1966 session at the American Musical and Drama Academy (AMDA) to humorous moments along the way (such as when Peterson partied with the cast of Company when they performed in London in 1972 and ended up with an unusual memento from Elaine Stritch’s hotel room).

Mallory is the more accomplished singer, whether performing songs she originated (the operatic “One More Kiss” from Follies) or those written for others, including “Send in the Clowns” from Night Music. She introduces the latter recalling how she watched from backstage night after night as Glynis Johns sang Sondheim’s most iconic number.

Both offer moving interpretations of several numbers not their own, especially “Too Many Mornings” from Follies, recreating the song first sung by John McMartin and Dorothy Collins with deep feeling.

After singing Follies’ “You’re Gonna Love Tomorrow,” the frequently modest Peterson breathlessly admits, “This number winded me when I was 23.” He performs ardently in each song and usually sounds great. They tell tales about their early stage roles in New York — Peterson played a frog in a children’s musical, Mallory got her New York start in a production of Little Mary Sunshine — and it’s apparent he had to work harder both as a singer and a dancer. At one point he issues a thank-you to Michael Bennett “who made me look like I could dance.”

They recall West Side Story via a heartfelt rendition of “Tonight,” in which Mallory shows off her still-gorgeous soprano (she taught voice after retiring from the stage and television, where she was known for roles on The Young and the Restless and Santa Barbara) and Peterson displayed his energetic tenor. She’s the more polished performer, but there’s a genuinely sincere magic when they sing together.

Their reconnection came about through an alignment of theater stars. Mallory married Mark Lambert, who played nervous Henrik in the original production of Night Music. Their daughter Ramona became a musical theater performer in her own right, and when she came to New York City to seek her fortunes on the stage there, Mallory asked Peterson to keep an eye on her. He did (“That’s what friends are for,” he says), and eventually saw Ramona cast in the role her mother originated, playing Anne Egerman in the 2009 Broadway revival of Night Music. 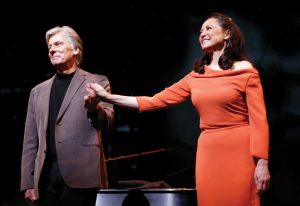 Peterson and Mallory in 2012 (photo by Luke Szczygielski)

The recording wraps up with Mallory and Peterson offering numerous thank-yous, including one to Sondheim, whose music played a big part in their careers. Peterson’s diverse talents led him to produce the magnificent star-studded March 1973 concert, Sondheim: A Musical Tribute at the Shubert Theatre on the set of A Little Night Music. In a note to Peterson, Sondheim wrote, “What can I say except thank you and, now that the last few weeks have aged you so, you’d never have to play another juvenile again.”

Peterson feels both gratitude and affection for Sondheim. “I always direct people to ‘Being Alive’ when someone says Sondheim is a cold writer and Company is anti-marriage,” he says before launching into an ardent rendition of that show’s culminating song of emotional awakening.

The composer was out of town for the 2012 event but sent a note: “I wish I could be there to hum along, but I fear that would ruin the enjoyment of the rest of the audience. Good luck, congratulations and welcome back!”

Peterson charmingly admits, “If I hadn’t been so damned jealous of you, I would never have had a career.” Mallory’s answer: “We are lucky to be here right now.” No one, of course knew this was her farewell performance, but we are all lucky to have this lovely recording of two fine performers who recreate the moment “when everything was possible.”

RICK PENDER is the publisher and executive editor of Everything Sondheim. He previously served as the managing editor of The Sondheim Review.

Rick Pender, founding editor of Everything Sondheim, has created a brand new, … END_OF_DOCUMENT_TOKEN_TO_BE_REPLACED

“We had the same priorities.  We wanted to take the audience where we wanted to … END_OF_DOCUMENT_TOKEN_TO_BE_REPLACED

In 1997, Stephen Sondheim sat down with Library of Congress Senior Music … END_OF_DOCUMENT_TOKEN_TO_BE_REPLACED

Editor's note: Since the printing of this article, Sondheim is reportedly no … END_OF_DOCUMENT_TOKEN_TO_BE_REPLACED

Isn’t it rich? His career arc stretches from writing the lyrics for West Side … END_OF_DOCUMENT_TOKEN_TO_BE_REPLACED