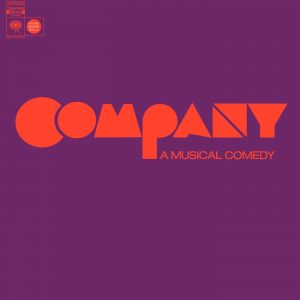 Company, Sondheim’s sixth Broadway musical, was his breakthrough to serious credibility. It received 14 Tony Award nominations, a record at the time. It’s a minimally plotted collection of songs and stories (more like a revue than a traditional musical) about a single man, his married friends, and several girlfriends. Robert wrestles with relationships and commitment. The show’s title has multiple facets, all important to appreciating its complexity. “Company” is the opposite of solitude and loneliness. It means being surrounded by friends and loved ones. It’s also the tightly knit ensemble of actors performing a show. 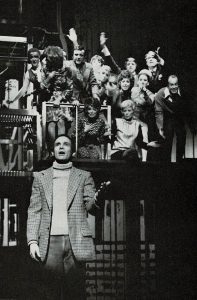 “After holding the composer at arm’s length,” Sondheim biographer Meryle Secrest wrote, “the Broadway community made up for past omissions.” It was Sondheim’s first collaboration with book writer George Furth, based on a series of short scenes about marriage that he had crafted but couldn’t advance to production. It took producer/director Hal Prince to turn the material into a musical, in his first collaboration with Sondheim. Company earned Sondheim his first Tony Awards—for score and lyrics—marking his arrival as a distinctive central figure in the world of musical theater. At age forty-one, he was acknowledged as a master of words and music.

Note: The following synopsis is for the revised, licensed version (first staged in London in 1996), differing in several ways from the original 1970 Broadway show. 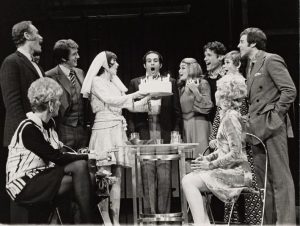 Robert is alone, listening to his friends’ miscellaneous thirty-fifth birthday greetings on his answering machine. Five couples—Joanne and Larry, Susan and Peter, Amy and Paul, Sarah and Harry, and Jenny and David—gather to surprise him. A birthday cake with lit candles appears. He blows out half the candles and doesn’t wish for anything.

The couples retreat to their apartment spaces. More musical busy signals are heard as the couples and his girlfriends—Marta, Kathy, and April—call and speak varied versions of his name. Robert sings about his married friends (“Company”), and we begin to see them in their everyday settings—with him visiting, a third wheel.

Robert has dined with Sarah and Harry. Making Robert a drink, Harry claims to have been on the wagon for a year and a half; Sarah corrects him. She offers Robert a brownie, claiming to be on a diet. Harry sneaks a drink; Sarah secretively devours a brownie. They continue to bicker, and Harry urges Sarah to demonstrate a karate move she has learned. She is reticent, but Robert encourages her and Harry and Sarah tangle, throwing each other to the floor. Finally, Sarah pins Harry. Joanne appears and sings ironically about marriage and relationships (“The Little Things You Do Together”). In the aftermath of the wrestling, all three end up on the floor. As other couples join Joanne’s song, the fight ends in a draw. Sarah sneaks another brownie as Harry steals another drink. Robert asks Harry if he’s ever regretted being married. Harry, David, and Larry describe their feelings about marriage (“Sorry-Grateful”). 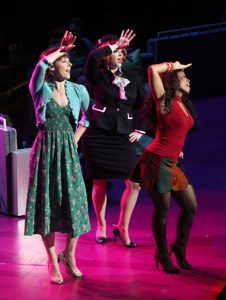 Visiting Peter and Susan, Robert jokingly says he wants to be the first to know if the happily married couple ever breaks up. They startle him by announcing their divorce, but explain they intend to continue living together. At Jenny and David’s apartment, they are smoking marijuana with Robert. It’s her first time, and she says she doesn’t feel it. They’re all getting high, and Jenny uncharacteristically swears at a neighbor telling them to be quiet. She asks Robert when he plans to get married. Saying he’s not avoiding marriage, he claims he simply hasn’t picked a time or a partner.

Robert’s three girlfriends—Marta, Kathy, and April—appear and sing about their frustrations (“You Could Drive a Person Crazy”). Back with Jenny and David, another joint is proffered, but David declines and tells Jenny to do the same, informing Robert that she’s too square to be smoking pot.

Several of the married men tell Robert about women they could set him up with (“Have I Got a Girl for You”). They ask, “Whaddaya wanna get married for?” when he could have physical satisfaction without emotional engagement. Robert sings about finding a woman who combines the best qualities of all of the married women (“Someone Is Waiting”).

Sitting on a park bench, Robert is visited by Marta who sings about New York as a city full of strangers (“Another Hundred People”). April, a sweetly naive airline stewardess, appears and apologizes for being boring. Then Kathy enters and tells Robert she’s moving to Vermont to get married—since he never proposed. Marta finishes her song and explains her eccentric views about life in New York.

On the morning of Paul and Amy’s wedding day, Robert is the best man. She is panicking. A woman in a choir robe sings about the blessings of 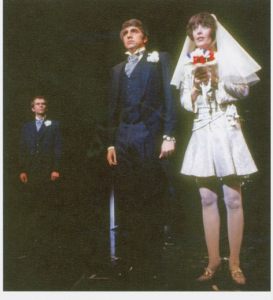 weddings, and Paul chimes in. But Amy frantically announces that she’s not “Getting Married Today.” She tearfully tells Paul she simply can’t; visibly upset, he leaves. Robert abruptly asks Amy to marry him, but she turns him down, suddenly realizing what she has with Paul.

Robert yearns for connection, but he’s not ready for a full commitment (“Marry Me a Little”). Back in his apartment, the guests are again present, and Amy enters with the birthday cake.

It’s still Robert’s birthday, and the cake is still there. He blows out most of the candles again—still not making a wish—and the wives finish the task for him. He reflects on being the odd man out, and the couples sing about togetherness (“Side by Side by Side”) and celebrate their friendship with him (“What Would We Do Without You?”), although the answer is “just what you usually do.” Robert ends up without a dancing partner. 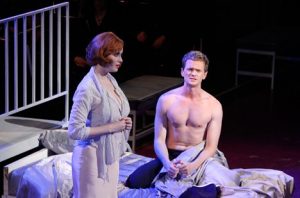 In Robert’s apartment, he and April move to the bedroom. She tells a story about a cocoon left in her care by a male friend. When a butterfly emerged, her cat injured it; that ended the relationship. Robert struggles with what to say next, so he describes becoming lost and unable to locate the motel where a date eagerly waited for his return. April undresses, feeling sorry for the misplaced girl and trying to grasp how his story relates to hers. They sing about her next flight (“Barcelona”), and he urges her to stay. When she agrees, he’s shocked.

Robert and Marta are guests at Peter and Susan’s, now divorced but still together. Marta says their relationship is very “New York.”

At a nightclub, Robert and Joanne drink while Larry is dancing. She loudly objects to women staring at her drunkenness, then proposes 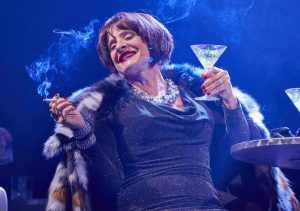 a sardonic toast to herself and “The Ladies Who Lunch.” She propositions Robert, but he turns her down. He anxiously sings about finding himself alone and uninvolved. He finally admits that he wants a meaningful relationship (“Being Alive”).

Back at the birthday party, the couples wait for Robert, to arrive but he fails to appear. His friends leave, shouting, “Happy Birthday, Robert!” Alone onstage, he blows out the candles and smiles.

Rick Pender, founding editor of Everything Sondheim, has created a brand new, … END_OF_DOCUMENT_TOKEN_TO_BE_REPLACED

“We had the same priorities.  We wanted to take the audience where we wanted to … END_OF_DOCUMENT_TOKEN_TO_BE_REPLACED

In 1997, Stephen Sondheim sat down with Library of Congress Senior Music … END_OF_DOCUMENT_TOKEN_TO_BE_REPLACED

Editor's note: Since the printing of this article, Sondheim is reportedly no … END_OF_DOCUMENT_TOKEN_TO_BE_REPLACED

Isn’t it rich? His career arc stretches from writing the lyrics for West Side … END_OF_DOCUMENT_TOKEN_TO_BE_REPLACED