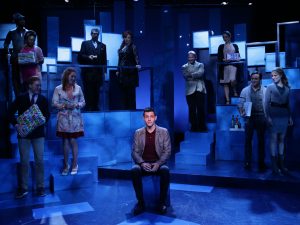 How do you solve a problem like Company? While now revered as a benchmark of the post-Golden Age, its own advancing years can be a challenge to those who might wish it would always be what it always was: a contemporary look, as through a martini glass darkly, at the difficulties of interpersonal relationships.

Neither relationships nor society are what they were during the show’s 1970 debut. In its season-opening production, Lyric Stage of Boston (Sept. 2-Oct. 9, 2016) chose to ignore the show’s 21st-century problem. The spirited, cleanly staged and strongly sung production scored high in freshness of performance; however, the 46 years between its original Boston tryout and this most recent production evidenced themselves immediately and persistently.

As the central character Robert must do on his 35th birthday, any production of the show must reckon with the passing of its own time. Director Spiro Veloudos’ choice to present the show in a recognizable 21st-century setting only set the script at odds with his otherwise rewarding production. In short, yes — people do still wear hats in 2016. Fortunately, the sprightly performances from a smart and able cast ensured that this production was not just a dinosaur trying to survive the crunch but rather a rewarding entertainment that allowed the talented performers to unleash their considerable insight and skills on the rich material.

As fans of the show are aware, its score, script and relationships are punctuated repeatedly by the buzzing of a telephone busy signal, a signifier of the difficulty of making rewarding interpersonal connections in the hedonistic Manhattan of the early 1970s. With the advent of the internet and mediaverse, one thing we very rarely — if ever — encounter these days is a busy signal. Since this aural motif is essential to the dramatic and musical content of the show, it simply cannot be omitted, even as it cannot be accounted for in a play set in 2016. The well-known documentary about the making of the original cast recording has often been noted for highlighting how brilliantly orchestrator Jonathan Tunick even included the busy signal — also the “Bobby Baby” motif — into the musical charts for “Another Hundred People,” itself an anthem to the difficulty of making viable connections.

So what is a director to do when trying to negotiate such a central anachronism? If it can’t be eliminated, then the production itself must be conceived in a way to acknowledge its presence and relevance; that is, it must be set in the time period in which the busy signal was still as recognizable as it was significant.

Of course, it’s possible to do a post-post-modern or even epic take on the material, finding ways to deconstruct it so that the period inconsistencies are part of the point of the production. However, the Lyric Stage production attempted to play it straight, as it were, merely updating the costumes and ignoring its 1970 textual roots. Imagine a production of The Sound of Music in which the nuns, in trying to save the von Trapp family, listen not to “the wireless” but to a podcast.

Whether referring to marijuana as “grass” or drinking “Sazerac Slings” or relying on an answering service to transmit messages or bemoaning the loss of hat-wearing matrons or reading Life magazine, the characters betray their original era throughout George Furth’s caustic libretto, Stephen Sondheim’s knowing lyrics, and even in the delightful but dated orchestrations. All of this is not a criticism of the original material; it reflects its time very aptly. However, it was the primary challenge to Veloudos in developing a more consistently conceived production.

When Boston’s Huntington Theatre produced the show in 1997, such concerns were not an issue, and the updated setting worked, as it did with the Donmar Warehouse production starring Adrian Lester in 1995. On the other hand, John Doyle’s 2006 Broadway revival chose to deconstruct and reinvent itself, with actors famously playing their own musical instruments to serve as the orchestra as well as the company, in stylized black and white, so that the dated references were seen in relief.

Fortunately, the performers at Lyric Stage displayed keen insight into the characters and delivered them in strong voice. As Robert, John Ambrosino was as delighted as he was confused by the observations of his married friends, bringing his frustration to the surface in the somewhat enigmatic central role and in clear musical tones, especially in “Marry Me a Little.” In the showy role of Joanne, Lyric Stage stalwart Leigh Barrett limned the stridency of her own character’s frustration with — well, everyone — and found extra notes to Joanne’s dramatic journey in her own cri de coeur, “The Ladies Who Lunch,” acknowledging her own discoveries of, and participation in, the phenomena she so gleefully chastises.

Teresa Winner Blume’s beautiful musical and dramatic high notes as Jenny also lifted the production, as did the rich voice of another reliable Lyric Stage regular, Davron S. Monroe. Also of note were Will McGarrahan, bringing out the resigned stolidity of Joanne’s put-upon husband Larry, and Matthew Zahnzinger as the alternately carefree and questioning Peter. The entire cast was up to the show’s challenges, more than validating Veloudos’ smart, effective casting. The set design — a series of blue blocks and cubes set against a nondescript background — served the production unobtrusively and well, and the musical staging, especially in the Act II opener, “Side by Side by Side,” was organic and effective, as it was in the oft-excised “Tick Tock,” danced superbly by Maria LaRossa.

Despite the unresolved temporal disconnect between material and staging, far from having to be regretful, there was much for an audience to be happy about in this production that had nothing to do with/all to do with its most critical motif — the busy signal.

Rick Pender, founding editor of Everything Sondheim, has created a brand new, … END_OF_DOCUMENT_TOKEN_TO_BE_REPLACED

“We had the same priorities.  We wanted to take the audience where we wanted to … END_OF_DOCUMENT_TOKEN_TO_BE_REPLACED

In 1997, Stephen Sondheim sat down with Library of Congress Senior Music … END_OF_DOCUMENT_TOKEN_TO_BE_REPLACED

Editor's note: Since the printing of this article, Sondheim is reportedly no … END_OF_DOCUMENT_TOKEN_TO_BE_REPLACED

Isn’t it rich? His career arc stretches from writing the lyrics for West Side … END_OF_DOCUMENT_TOKEN_TO_BE_REPLACED