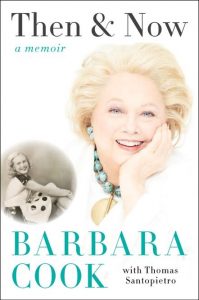 In Barbara Cook’s preface to her memoir Then & Now, she expresses the hope that “this book might help some people through bad times.” This piercingly candid, remarkably clear-eyed, hard-headedly optimistic narrative of a life well lived certainly accomplishes that goal. It also provides a fascinating behind-the-scenes look at this supreme Stephen Sondheim interpreter’s impressive career as an actress and a singer, first on Broadway and television and later mostly in cabarets and concert halls.

Written with Tom Santopietro in economical, no-nonsense prose, the book’s biggest surprise, at least for me, was the practically Dickensian darkness of her childhood in Atlanta. When a six-year-old Cook’s 18-month-old sister dies of pneumonia, her mercurial mother blames her older child because the baby caught her sister’s whooping cough. When three years later Cook’s traveling salesman father leaves his wife to remarry and form another family in North Carolina, her comfortable middle-class lifestyle is exchanged for cramped living with poor, hardhearted relatives. Even worse, her mother blames the divorce on the death of her sister and thus, by extension, on Cook. That’s some heavy psychological baggage for a kid.

Cook arrives in Manhattan in 1948 at age 20 with her mother doggedly at her side, following an actor with whom she had become romantically involved when he toured through Atlanta. It is supposed to be a vacation, but in two weeks Mom is back on a train headed south while her daughter remains in the Big Apple.

Cook writes infectiously of her excitement at being in the postwar metropolis and her early attempts at establishing herself. It takes three years to get her first Broadway gig, as the ingénue singing E.Y. Harburg–Sammy Fain songs in Flahooley, a short-lived anti-capitalism satire. Soon she’s a favorite of Oscar Hammerstein II and Richard Rodgers, who cast her as Ado Annie and Carrie in well-received City Center revivals of Oklahoma! and Carousel.

In 1955 she strikes sparks as the comic soubrette in a hit musical about the Amish, Plain and Fancy, which leads to her breakthrough leading roles of Cunegonde in Candide and Marian the Librarian in The Music Man. Her chronicles of both shows are tasty, especially her Candide experience, which gets its own chapter. (When Cook gets nervous because Leonard Bernstein has come to her dressing room to tell her that Maria Callas is out front, he reassures her: “Don’t be ridiculous. She’d kill for your E-flats.”)

The 1960s are not as kind to Cook’s Broadway career — except for She Loves Me, which gets a fond recounting — though she works regularly and to continued personal acclaim. Tempestuously married to a controlling man and mother of a young son, she embarks on an affair with also married co-star Arthur Hill during the 1964 flop musical Something More! (“The problem was that Jule Styne was directing”) and begins drinking heavily. The marriage ended in 1965, and as the 1970s progress her issues with alcohol swamp pretty much everything. At one point she is homeless (staying with a friend) and shoplifting food. Terribly depressed, she gains mountains of weight. Her ex-husband tells her son that he expects she won’t live much longer.

Enter Wally Harper, wizard musical director and arranger, who reinvents her as a cabaret singer, beginning with a stint at the gay club Brothers and Sisters. Soon she’s at Carnegie Hall and the toast of the town. She stops drinking, works on her problems with food, and embarks on the new career that will lead her all the way to a Kennedy Center Honor, becoming one of the most acclaimed American singers of all time.

The tempestuous Harper, also an alcoholic, has his own demons. But despite their clashes he and Cook stay fast friends and collaborators until his death in 2004. Interestingly, Cook says that as her second career took off, whenever she would run into Sondheim, he would ask her why she doesn’t sing his songs. It turns out that Harper, who did the dance arrangements for Company and wanted his own career as a composer of Broadway musicals, discouraged her from singing them out of jealousy. However, once Cook makes a great success as Sally Durant Plummer in the star-studded 1985 Avery Fisher Hall concert presentation of Follies (Sondheim requested her for the role, which she auditioned for but lost to Dorothy Collins in 1971), the dam breaks, and she goes on to become a highly revered Sondheim interpreter, with Harper as her ardent collaborator. Her account of the concert and the outsized personalities involved in it (especially Elaine Stritch, who played with Cook in Plain and Fancy) is a highlight.

Another highlight is her tale of starring as Margaret White, the title character’s mother in the infamous 1988 musical Carrie, based on the Stephen King novel, in England for the Royal Shakespeare Company. She leaves out the fact that at one performance she was almost decapitated by an errant staircase. She completed the month-long run in Stratford, but exited by choice before the ill-fated show reached Broadway. Interestingly, she once questioned her suitability for the role, presciently telling the powers that be that they should have cast Betty Buckley — who took over as Margaret on Broadway.

Cook several times calls herself “a work in progress” and says that she strives continually to improve, both as a person and an artist. Her mantra to herself and the young singing students she mentors is “You are enough.” Though she recently canceled a planned Off-Broadway show based on her memoir shortly after rehearsals began (its author, James Lapine, told The New York Times, “I think Barbara in her heart didn’t want to get up and read from her book”) and at 88 is confined to a wheelchair, she is still performing, celebrating Here & Now’s publication with shows at Manhattan’s Feinstein’s/54 Below (remaining dates July 21 and 23). As a performer Cook is much more than enough: She is indispensable, as is her blunt and compelling memoir.

ERIK HAAGENSEN, a freelance journalist and an award-winning playwright/lyricist, was the final theatre editor of Backstage. His column appears regularly at bwaytunes.com.

Rick Pender, founding editor of Everything Sondheim, has created a brand new, … END_OF_DOCUMENT_TOKEN_TO_BE_REPLACED

“We had the same priorities.  We wanted to take the audience where we wanted to … END_OF_DOCUMENT_TOKEN_TO_BE_REPLACED

In 1997, Stephen Sondheim sat down with Library of Congress Senior Music … END_OF_DOCUMENT_TOKEN_TO_BE_REPLACED

Editor's note: Since the printing of this article, Sondheim is reportedly no … END_OF_DOCUMENT_TOKEN_TO_BE_REPLACED

Isn’t it rich? His career arc stretches from writing the lyrics for West Side … END_OF_DOCUMENT_TOKEN_TO_BE_REPLACED