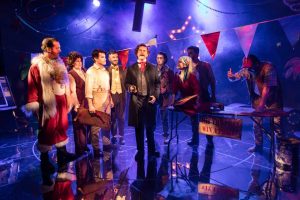 “Come on and kill a president,” the Proprietor (Rob McDougall, right) urges the would-be assassins at Hayes Theatre Company in Sydney. PHOTO BY PHIL ERBACHER

The Hayes Theatre Company in Sydney delivers a riveting, high energy and highly accomplished production of Stephen Sondheim and John Weidman’s 1990 musical Assassins (Sept. 15-Oct. 22, 2017). The political backdrop of the production strongly evokes a Trumpesque universe that is divisive, bizarre, threatening and unpredictable. On the show’s September opening night the Sydney audience gasped then laughed in recognition when the Balladeer sang:

From the moment the theater doors open and audience members take their seats, the Proprietor is onstage in a director’s chair, engrossed in reading Donald Trump’s Art of the Deal while listening to alt-right commentary on a portable transistor radio. This sets the scene for a Trump backdrop and acts as a prelude to the opening number, “Everybody’s Got the Right.”

The themes in Assassins are timeless and translate well across national boundaries. The individual stories of the assassins (from 1865 and 1981), as well as the collective meanings of their deeds, provoke both introspection and reflection on national dreams, aspirations and myths — whether American, Australian or any other.

Though satirical in tone, the show resonates with concerns that people across the globe now have about violence and terror. Indeed the seeds that create the would-be assassin (or the would-be terrorist) often stem from a similar terrain of disempowerment, frustration and a thirst for revenge. The assassins and their voices in this musical are recognizable — whether on the streets of Charlottesville, the Trump election rallies of 2016 or the agitated far-right marches on the streets of Sydney and Melbourne.

The wayward, diverse characters that inhabit this musical, each with his or her peculiar logic and reason, oscillate between sorrow and stupidity, farce and tragedy, comedy and horror. That’s a challenge for any director undertaking this unconventional show, and Dean Bryant achieves balance brilliantly between the drama and the vaudeville. As the characters fluctuate between the comical and the shocking, Bryant’s careful and slick direction ensures that it doesn’t descend into slapstick or melodrama. The transitions between scenes and within songs and ballads are smooth, fluid and executed with surety and confidence. 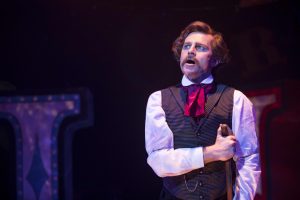 There was much anticipation of David Campbell playing John Wilkes Booth, the assassin of President Abraham Lincoln in 1865, and he doesn’t disappoint, giving an impressive performance vocally and dramatically. In this role we see Campbell’s evolution and maturity in another major Sondheim role. American audiences will know him from the New York premiere and cast recording of Saturday Night (2000) in which he played the role of Gene. His previous Sondheim role was as Robert in the Sydney production of Company (2007). As Booth he brings to the role a sense of self-righteous vindictiveness, vanity and the insecurity of a failing alcoholic actor with an exaggerated view of his role in history.

While Campbell well deserves the accolades for his noteworthy performance, equal recognition must be given to the ensemble. Each and every one of them gives a formidable performance. A splendid line-up of vocal richness reverberates throughout the theater and scene after scene as the performers dazzle with their acting, singing and personification of this array of misfits and madmen.

Because of the limited role he plays, we are only given glimpses of Rob McDougall’s lush and commanding baritone voice as the Proprietor. As a would-be poster boy for the NRA, he gives the assassins their weapons, supplies them with ammunition and entices them to “kill a president.” Onstage he exudes a sinister character, fuelling their rage. His delivery of “Everybody’s got the right/To be different./Even though/At times/They go to extremes” is chilling yet operatic.

Maxwell Simon, an exciting new talent making his professional theater debut as the Balladeer, embodies a youthful teen in shorts, sweater, sneakers and guitar-in-hand narrating the stories and following the tradition of Balladeers with songs of hope and optimism. He also interjects and corrects the distortions and falsehoods of the assassins. He powerfully transitions from the cheerful Balladeer to step into the role of Lee Harvey Oswald as a tortured soul, groomed by the other assassins to immortalize himself by shooting President John F. Kennedy in 1963. Such is the power and tension of this scene that it could be imagined in a parallel moment in which Jihadists might brainwash a would-be terrorist to commit a shocking act of vengeance.

Bobby Fox gives the standout performance as Charles Guiteau, the man who assassinated President James Garfield in 1881 when his desperate desire to become the American ambassador to France was ignored. He sports a haircut straight out of One Flew Over the Cuckoo’s Nest, the fluttering eye movements of a madman and a bowtie to match. Charming but insane, likable but alarming, he gives a brilliant characterization of Guiteau that rises to even more heights as he mounts the gallows steps singing “I am going to the Lordy” in “The Ballad of Guiteau.”

As Giuseppe Zangara, the failed assassin of President Franklin D. Roosevelt in 1933, Martin Crewes gives an intense and stirring portrayal of the Italian immigrant completely disenfranchised and overwhelmed in a new country. He conveys an agonizing combination of physical pain and mental anguish matched by a forceful vocal performance.

Jason Kos as Leon Czolgosz, President William McKinley’s assassin in 1901, is the convincing embodiment of the wistful proletariat foreign worker, speaking with a heavy Polish accent and burdened by an impending fatalism. Inspired by Emma Goldman, effectively played by Laura Bunting, he powerfully articulates and illuminates a political manifesto of a capitalist system that reproduces vast inequalities between the haves and have-nots in a dog-eat-dog world. 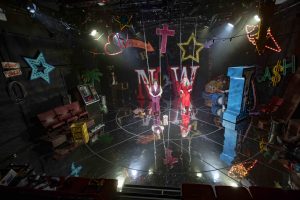 The duo of Kate Cole as Sara Jane Moore and Hannah Fredericksen as Lynette “Squeaky” Fromme greatly impress and tantalize as the stoned, ridiculous would-be assassins who shot at President Gerald Ford in 1975. (Fromme had no bullets in her gun!) Their ludicrous machinations generate amusement and awkward laughter from the audience. 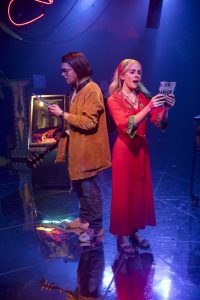 Connor Crawford as John Hinckley Jr. gives a compelling portrait of a troubled, brooding and deluded young man, obsessed with young actress Jodie Foster; to win her love in 1981, he decided to shoot President Ronald Reagan. The duet “Unworthy of Your Love,” sung with Hannah Fredericksen, expresses the pain of unrequited love and the deluded mindset of their infatuation with their love objects: Hinckley with Foster and Fromme with mass murderer Charles Manson.

Justin Smith gives a memorable performance as Samuel Byck, the comic/tragic disheveled fast-talking failed assassin who plans to highjack a plane and crash it into the White House to kill President Richard Nixon in 1974. Dressed as Santa Claus, he mesmerizes and captivates the audience with manic pronouncements and tape-recorded messages to Leonard Bernstein.

Assassins does not follow a typical musical theater structure. It is assembled as a revue, a montage of interconnected scenes. It starts with the dreamlike and mechanical sounds of a carnival fairground and covers a range of musical genres including infusions of traditional folk tunes and rhythms of John Philip Sousa and Stephen Foster. Under the musical direction of Andrew Worboys and Steven Kreamer, and blessed with an ensemble of rich, well projected voices, the singing, tempo control and music arrangements are beautifully realized. 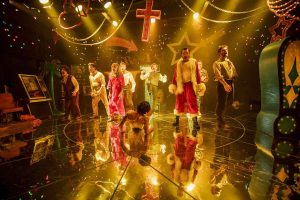 The set and costume design by Alicia Clements present a rich multitude of colors, lights, fairground props, posters of presidents as shooting targets, merry-go-round, bumper cars and other carnival regalia depicting a surreal world into which the assassins can escape. A retreat from the real world! Complementing Clements’ colorful and detailed sets is effective lighting by Ross Graham who highlights with careful precision the show’s changing movements and moods. On the Hayes Theatre’s small and limited stage, choreographer Andrew Hallsworth sets in motion steps and movements that add coordinated expression and meaning to the stories.

The show climaxes with “Another National Anthem” in which all of the assassins, in a spirit of defiance and unified dissent, lament the American dream that they have been denied:

There’s another national anthem, folks,
For those who never win,
For the suckers, for the pikers,
For the ones who might have been …

Soon after, the lights focus on the Proprietor happily holding up a copy of The New York Post with a triumphal Donald Trump beaming on the front cover. At last their savior has been found. But be careful what you wish for!

PETER KHOURY is a writer and academic in Sydney.

Rick Pender, founding editor of Everything Sondheim, has created a brand new, … END_OF_DOCUMENT_TOKEN_TO_BE_REPLACED

“We had the same priorities.  We wanted to take the audience where we wanted to … END_OF_DOCUMENT_TOKEN_TO_BE_REPLACED

In 1997, Stephen Sondheim sat down with Library of Congress Senior Music … END_OF_DOCUMENT_TOKEN_TO_BE_REPLACED

Editor's note: Since the printing of this article, Sondheim is reportedly no … END_OF_DOCUMENT_TOKEN_TO_BE_REPLACED

Isn’t it rich? His career arc stretches from writing the lyrics for West Side … END_OF_DOCUMENT_TOKEN_TO_BE_REPLACED