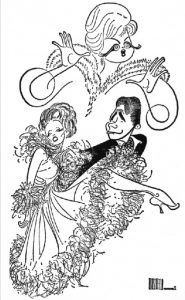 Anyone Can Whistle in 1964, Sondheim’s fourth Broadway musical, was his third collaboration with Arthur Laurents, who previously wrote the books for West Side Story and Gypsy. Laurents also directed the production, a decision that probably diminished his ability to shape his script into a more viable production. In Finishing the Hat, Sondheim confessed, “Arthur and I had written the piece as if we were the two smartest kids in the class (in the back row, of course), wittily making fun of the teacher as well as our fellow students, demonstrating how far ahead of the established wisdom we were.” That attitude didn’t sit well with critics or audiences.

Anyone Can Whistle offers a message about the importance of the individual in a conformist society—while taking pot shots at government, religion, science and anything else in the way. The show’s chaotic, disjointed, absurdist story, more satirical social commentary than mainstream entertainment, had in just nine performances, the briefest run of any of Sondheim’s Broadway productions. Nevertheless, several songs from the show have become Sondheim standards for revues and cabarets. But Anyone Can Whistle has had only a few subsequent productions. 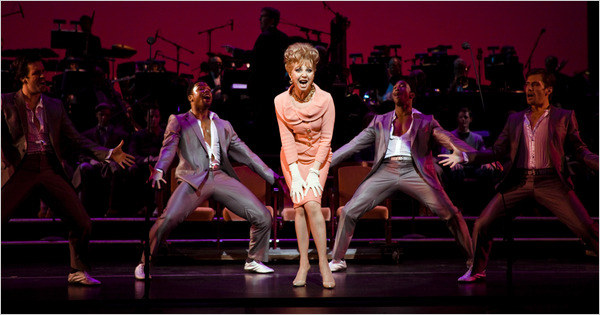 Donna Murphy as Cora in an Encores! performance of Anyone Can Whistle

We begin in the main square of an imaginary small town somewhere in America; its one industry manufactured a product that never wore out, a formula for economic failure. The town’s ruthless, manipulative Mayoress, Cora Hoover Hooper, appears—borne on a litter by four young men, her “Boys,” who often sing in close harmony. Three corrupt political cronies who constantly surround her—Comptroller Schub, Treasurer Cooley, and Chief Magruder—conspire to line their own pockets. The bank and other businesses have failed, but wealthy Cora controls everything and is doing nothing.

One institution has succeeded: “Dr. Detmold’s Sanitarium for the Socially Pressured,” known casually as The Cookie Jar. Its smiling inmates, known as Cookies, wander about, obliviously singing a happy anthem about being like a bluebird.

However, most citizens are furious with Cora, and she knows she’s disliked. She yearns to overcome her unpopularity (“Me and My Town”). She seeks something—a miracle, perhaps?—to lure tourists. Her cronies hatch an unethical plan.

They take Cora to a large rock on the edge of town. Baby Joan Schroeder, an odd, thirsty seven-year-old, licks the rock and a gush of water bursts forth. Cora’s team proclaims it a miracle that will, of course, attract tourists to see Baby Joan and sample the water with supposedly curative powers (“Miracle Song”). Schub and his crew confide to Cora that the miracle is a fraud using a pump hidden inside the rock. Nevertheless, pilgrims flock to town to experience it. 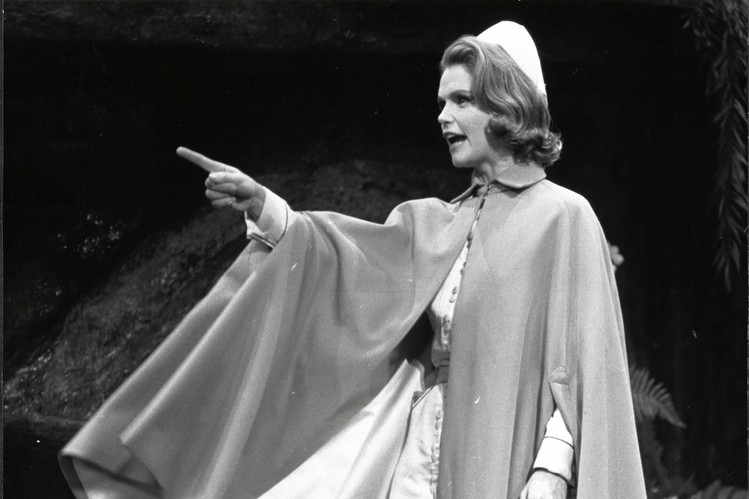 Lee Remick as Fay Apple in the Original Broadway production

Fay Apple, a young nurse from The Cookie Jar, is deeply skeptical. The 49 patients seem far healthier and happier than the disgruntled townspeople; in fact, the Cookies are committed non-conformists, not mental patients. Fay brings the Cookies to partake of the water, certain they won’t be changed, thus exposing the hoax. After Schub’s team prevents them from drinking, the Cookies scatter and mingle among the pilgrims, becoming impossible to sort out. Fay secretly hopes for a personal miracle, a hero who will deliver the town from the madness created by Cora and her venal team (“There Won’t Be Trumpets”).

Schub sends for Dr. Detmold to identify the Cookies, but he is unable. He suggests that his new assistant might sort things out. Moments later, a stranger, J. Bowden Hapgood, appears (with a clap of thunder and trumpet calls), seeking directions to The Cookie Jar. Everyone assumes he’s the new assistant and urges him to step in. He randomly questions everyone present, then divides them into Group A and Group One. But he refuses to divulge his criteria for each segment. Cora’s team can’t get straight answers; in fact, Hapgood’s questions causes them to doubt their own sanity.

After a lengthy, chaotic chase sequence (“Simple,” which uses music and choreographed movement), the stage darkens except for a spotlight on Hapgood, who tells the audience, “You are all mad!” When stage lights are restored, the set has vanished, and the cast is revealed in theater seats, holding programs and applauding the audience. 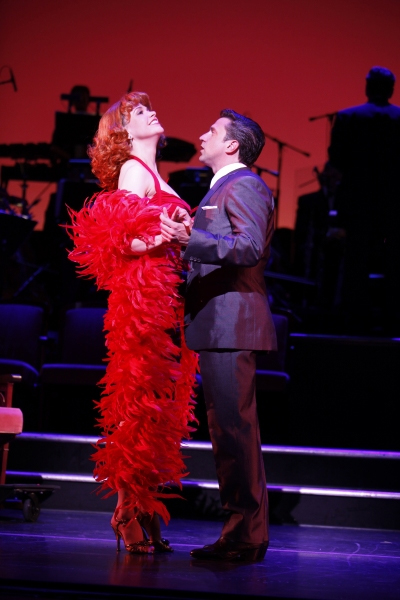 Chaos continues as everyone cheers for Hapgood (“A-1 March”). Another stranger appears, a red-headed French woman in dark glasses and a feathered coat. It’s actually Fay, disguised as a “Lady from Lourdes,” posing as a professional miracle inspector. She and Hapgood woo one another in the style of a French romantic film (“Come Play Wiz Me”). He knows she’s not who she claims to be, but he’s unwilling to join her skeptical crusade. She tells him her disguise enables her to step away from her rigid, cynical ways. She hopes Hapgood can help her to learn to be free (“Anyone Can Whistle”).

Groups A and One are still not sorted out. Hapgood becomes everyone’s hero, much to Cora’s displeasure (“A Parade in Town”). He suggests that Fay should destroy The Cookie Jar’s patient records so everyone can stop pretending. She rejects this idea, and he bristles against naysaying (“Everybody Says Don’t”). Hapgood tells her he’s not a doctor, but rather the 50th Cookie, a practicing idealist who’s weary of heroic crusading and ready to retire to The Cookie Jar. Moved by his revelation, Fay destroys the records. 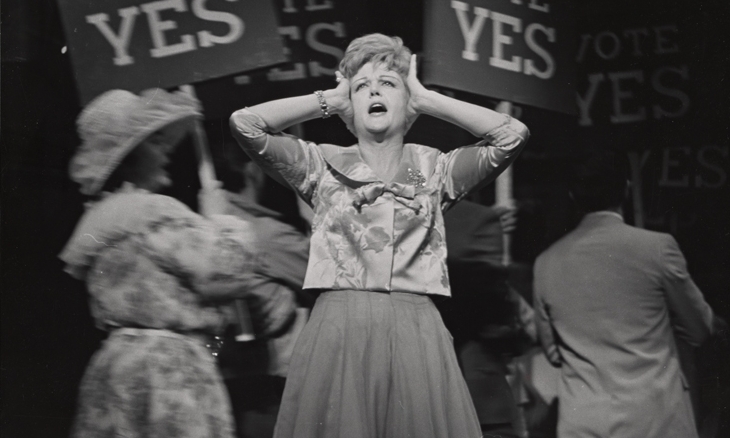 Angela Lansbury in the Original Broadway production of Anyone can Whistle

Cora and her team shut down the Miracle Rock and blame Hapgood for its failure. They take comfort in their nefarious planning (“I’ve Got You to Lean On”). Everyone turns on Hapgood. He and Fay, still disguised, seek refuge under the rock where they discover the fraud.

A message from the Governor notifies Cora that if the 49 inmates are not identified quickly, she will be impeached. She and Schub decide to arrest people randomly. Fay again implores Hapgood to help her expose the fraud, but he says everyone yearns for a miracle and no one will accept the truth. Despite her reticence to reveal her identity, Fay swears to go it alone (“See What It Gets You”).

Schub and his team begin to arrest people (“The Cookie Chase”). Fay is captured, and her identity is exposed. She reveals the hoax, but no one believes her. When Schub says he will lock up innocent people, Fay identifies the Cookies from memory. But she omits Hapgood, saying, “You’re the hope of the world.” He tries to persuade her to leave town with him, but she can’t break free. They reflect on what they’ve briefly shared (“With So Little To Be Sure Of”).

A new miracle occurs in a nearby town, and Cora’s town is suddenly deserted. Since everyone seems to be mad, Schub and Cora conspire to turn the entire town into one big Cookie Jar. Fay returns to work and meets the new assistant, a truly pragmatic, rigid, and disbelieving woman. She marches the Cookies off to the next town to disprove the new miracle. Fay realizes that this is how she appeared and yearns to start anew. She seeks Hapgood at the rock. Not finding him, she tries to whistle and fails. Her second effort produces a shrill, ugly sound. Hapgood appears and says, “That’s good enough.” They embrace, and the rock emits an enormous spout of water with every color of the rainbow.

Rick Pender, founding editor of Everything Sondheim, has created a brand new, … END_OF_DOCUMENT_TOKEN_TO_BE_REPLACED

“We had the same priorities.  We wanted to take the audience where we wanted to … END_OF_DOCUMENT_TOKEN_TO_BE_REPLACED

In 1997, Stephen Sondheim sat down with Library of Congress Senior Music … END_OF_DOCUMENT_TOKEN_TO_BE_REPLACED

Editor's note: Since the printing of this article, Sondheim is reportedly no … END_OF_DOCUMENT_TOKEN_TO_BE_REPLACED

Isn’t it rich? His career arc stretches from writing the lyrics for West Side … END_OF_DOCUMENT_TOKEN_TO_BE_REPLACED