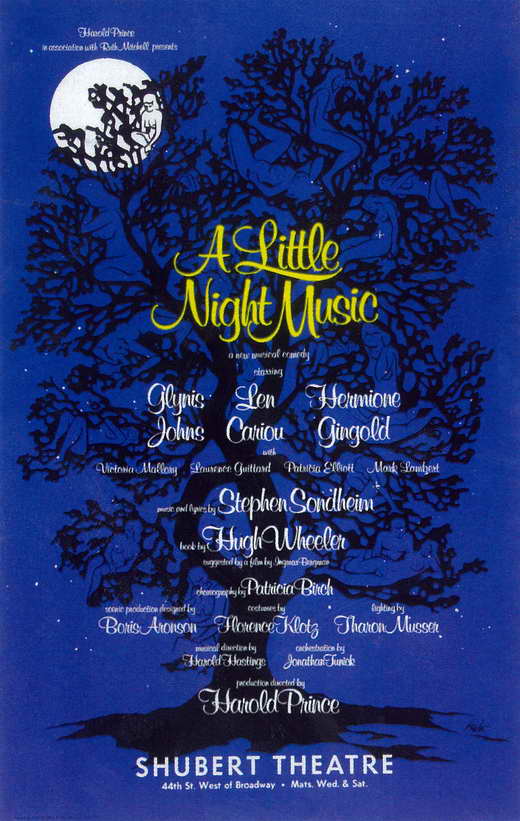 A Little Night Music is Sondheim’s eighth Broadway musical. The romantic farce about the lives of several upper middle-class couples in early twentieth-century Sweden was suggested by Ingmar Bergman’s Smiles of a Summer Night (1955), an evening of sexual musical chairs on the longest night of the year. Sondheim’s score, featuring his best-known song, “Send in the Clowns,” was replete with three-quarter time melodies. The plot assembled by book writer Hugh Wheeler was complicated but clever, and the couples—mostly mismatched at the start—ended up with more desirable partners by the final curtain. Sondheim won a record-setting fourth consecutive Tony Award in 1973 for the season’s best score. 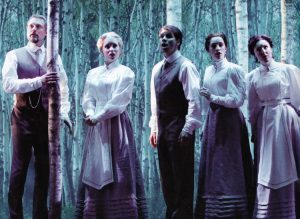 The Quintet in the 2009 Broadway revival

Midsummer in Sweden, circa 1900. A Quintet of singers come onstage and wordlessly vocalize an overture in three-quarter time; they play minor characters during the production, but they especially function as a kind of Greek chorus, offering commentary throughout the show. As the overture ends the main characters join in a surreal dance, changing partners and recoupling (“Night Waltz”). The Prologue opens with Frid, the butler at Madame Armfeldt’s country estate, delivering the elderly woman in her wheelchair to a room where she plays solitaire and chats with her precocious granddaughter, Fredrika, age thirteen. She tells the girl about the “summer night smiling,” three times—at the young, at the fools, and finally at the old. Madame Armfeldt disapproves of the conduct of her daughter, Desirée, Fredrika’s mother and a renowned traveling actress. 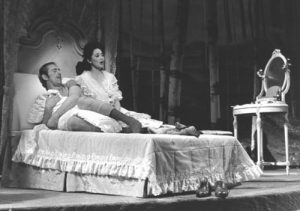 At the estate of the Egermans, Anne, age eighteen, primps and scolds Fredrik, her much older husband, for being gloomy. Henrik, Fredrik’s nineteen-year-old son from a previous marriage, a somber divinity student, practices the cello. Fredrik tells Ann he has tickets to a theater performance by “the one and only Desirée Armfeldt” in a new French comedy, and she seems excited. He tries to kiss Anne, still a virgin after nearly a year of marriage, but she is preoccupied with primping and playfully turns him away. He imagines various romantic advances but gives up and naps. Henrik, who secretly yearns for Anne, is teased by Petra, a saucy maid. He’s frustrated at every turn in his life (“Later”). Meanwhile, Anne promises to herself that she’ll give in to Fredrik (“Soon”). Their three songs intertwine and overlap. Drifting to sleep, Fredrik dreams of Desirée and murmurs her name—much to Anne’s dismay.

Desirée sings of her consuming career in the theater (“The Glamorous Life”), supported by the Quintet as members of her acting troupe. Despite her arrival in town, she is too preoccupied to spend much time with her daughter or her mother. 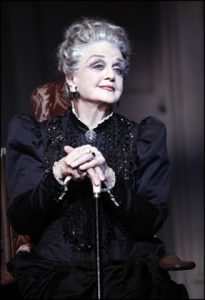 Angela Lansbury in the 2009 Broadway revival

Onstage at the theater, Desirée overtly notices Fredrik, as the Quintet recalls romantic encounters (“Remember?”). Anne is upset by Desirée’s obvious eye contact with Fredrik and departs in tears. He takes her home, then goes out for a stroll, inevitably ending up at Desirée’s quarters. Seeing her for the first time in fourteen years after their failed romance, he tries to positively describe his unfulfilled marriage (“You Must Meet My Wife”); Desirée is skeptical. He suggests reviving their romance, and Desirée willingly agrees.

Elsewhere, Madame Armfeldt muses about her life. She once had many lovers: barons, dukes, and even kings. She doesn’t object to affairs, but it troubles her that modern behavior is so lacking in delicacy and serious romance (“Liaisons”).

Fredrik and Desirée’s evening is interrupted by the arrival of her extraordinarily jealous lover, Count Carl-Magnus Malcolm, a haughty dragoon in military attire. Fredrik, undressed, fabricates a feeble alibi about signing legal documents and accidentally falling into a hipbath, soaking his clothes. Carl-Magnus angrily sends Fredrik on his way in a nightshirt. The Count expects fidelity from all the women in his life: his wife and his mistress (“In Praise of Women”). 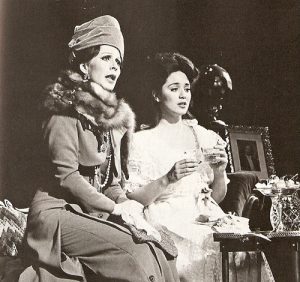 Patricia Elliott and Victoria Mallory in the original Broadway cast

The next day, Carl-Magnus tells his wife Charlotte about throwing Fredrik out of quarters of his paramour Desirée. He instructs his long-suffering spouse to inform Anne about Fredrik’s indiscretion. Charlotte, who still loves her arrogant husband, arrives at the Egerman home to tell all, and she and Anne commiserate matrimonial challenges (“Every Day a Little Death”).

Desirée visits her mother in the country and proposes inviting guests to her estate for the weekend, specifically Fredrik and his family. Madame Armfeldt obliges and sends formal invitations. Anne is deeply suspicious, while her maid Petra is ecstatic. Charlotte advises Anne to accept so Fredrik can compare her youth to Desirée, who will “grow older by the hour.” Charlotte tells Carl-Magnus about the weekend, and he decides they will show up uninvited. Everyone prepares for a lively weekend (“A Weekend in the Country”). 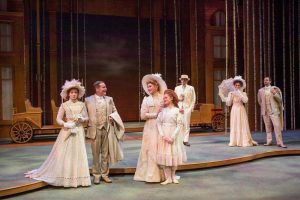 As the guests assemble, the Quintet sets the tone for the magical white night (“The Sun Won’t Set”). Fredrik and Carl-Magnus anxiously await dinner and individually contemplate how things might have turned out without Desirée (“It Would Have Been Wonderful”). Each hopes for a private moment with her; Desirée seeks out Fredrik and invites him to her bedroom later. The furious Carl-Magnus stakes his own claim and insists he will visit her in her bedroom. 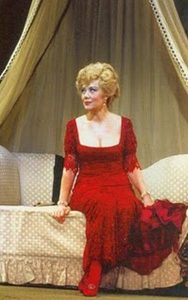 The guests gather for a candlelit feast in Madame Armfeldt’s formal dining room; the Quintet reflects everyone’s anxieties (“Perpetual Anticipation”). To make Carl-Magnus jealous, Charlotte flirts shamelessly with Fredrik, angering her husband. Dinner conversation quickly turns into verbal sparring and ends with Henrik smashing his wine glass in disgust and running off. The guests scatter, as Anne and Fredrika go in search of the distraught young man.

Fredrik meets Desirée in her bedroom, where she confides her hope to permanently rekindle their love. But he says he won’t abandon his young bride. Desirée is left alone with her regrets of what could have been (“Send in the Clowns”). 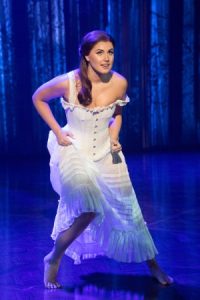 Anne finds Henrik as he fails to hang himself. She realizes she loves him, not his father. Elsewhere, Petra and Frid, the butler, have enjoyed wine and lovemaking. While he sleeps, she contemplates her romantic and practical options for love and life (“The Miller’s Son”).

Charlotte apologizes to Fredrik for her forward behavior and consoles him when they espy Henrik and Anne ready to escape. Looking out Desirée’s bedroom window, Carl-Magnus sees Fredrik and Charlotte together. He jealously challenges Fredrik to a game of Russian roulette. The men go off and a gunshot is heard. The dragoon comes in carrying the unconscious Fredrik with merely a grazed ear. Charlotte sees that her husband cares for her, and they prepare to depart immediately.

Fredrik tells Desirée he has lost his son, his wife, and nearly his life in less than an hour. But he is relieved and recognizes that Fredrika is his daughter. Desirée and Fredrik realize they are meant to be together (“Send in the Clowns – Reprise”).

Madame Armfeldt explains to Fredrika that the night has already smiled twice—once for the young (Henrik and Anne) and once for the fools (Desirée and Fredrik). As the formerly mismatched lovers waltz among the birch trees (“Night Waltz”) with their true partners—Fredrik with Desirée, Anne with Henrik, and Carl-Magnus with Charlotte—the night’s third smile comes. It’s the one for the old, and Madame Armfeldt peacefully expires.

Rick Pender, founding editor of Everything Sondheim, has created a brand new, … END_OF_DOCUMENT_TOKEN_TO_BE_REPLACED

“We had the same priorities.  We wanted to take the audience where we wanted to … END_OF_DOCUMENT_TOKEN_TO_BE_REPLACED

In 1997, Stephen Sondheim sat down with Library of Congress Senior Music … END_OF_DOCUMENT_TOKEN_TO_BE_REPLACED

Editor's note: Since the printing of this article, Sondheim is reportedly no … END_OF_DOCUMENT_TOKEN_TO_BE_REPLACED

Isn’t it rich? His career arc stretches from writing the lyrics for West Side … END_OF_DOCUMENT_TOKEN_TO_BE_REPLACED