Since the original 1970 Broadway production of Stephen Sondheim and George Furth’s Company won six Tony Awards, the musical comedy about life, love and marriage has been staged as written time after time through the years. Director Marianne Elliott’s revival is a game changer.

Sondheim and Elliott’s reworking has re-imagined Bobby, the original male character whose 35th birthday links the play’s vignettes, as a contemporary woman named Bobbie. “Changing the gender of the central character … brings the show completely up to date. It’s modernized the piece in a really exciting way,” said actress Rosalie Craig who plays the role. In effect, the play now focuses on the issues of “having a career and a successful life in your mid-30s, and the pressure from those around us to get married, have babies and settle down.”

As for the change in supporting characters from a heterosexual to a homosexual couple, “I hope it makes this production feel very, very now,” said Elliott. “We are keeping the existing dialogue, and not changing the famous scene in which the character gets cold feet about their impending marriage and sings the iconic ‘I’m not getting married today.’ The characters of Jamie and Paul (originally Amy and Paul) feel like a lot of the contemporary gay male friends I know.”

Producer Chris Harper, who joined with Elliott in 2016 in their company Elliott & Harper Productions, and actress Rosalie Craig offered Everything Sondheim insights into their new production. 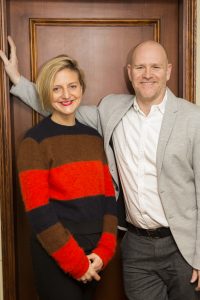 You are credited with the idea for the new version of Company. When did you first consider it? What inspired it?

I saw a production 20 years ago and I had a huge connection to it. In many ways, I felt that I was Bobby and over the years, it’s been one of those shows I’ve listened to again and again. My friends were always asking me why I wasn’t married. Although I haven’t met the perfect partner, I had always wanted to be a parent. So eventually I decided to have children as a single dad.

When my twins came, they were 10 weeks premature and whilst they were in the hospital, for a while, it was quite frightening. Every day that I travelled to the hospital to visit them, I listened to ‘Being Alive’ on a loop. It helped me have the strength and courage to get through the days and it was while I was listening to it I wondered what it would be like to hear Rosalie Craig singing this song. Then I thought a bit more deeply about the idea of producing Company with Bobby as a woman.

I have so many incredible female friends who have great careers, wonderful social lives and are beautiful, confident women but aren’t married — and people are always asking them, ‘why not?’

This new production will tackle what it is to be a woman in 2018 what it’s like to ask yourself ‘Why should I get married?’

In addition to re-gendering Bobby, we are also switching the gender of a number of characters. The version we are doing is pretty close to the workshop we did two years ago. We have also switched the gender of Amy, so that the role of Bobbie’s best friend will now be played as a gay man called Jamie.

Why do you think the “gender bending” is appropriate for Company at this time? 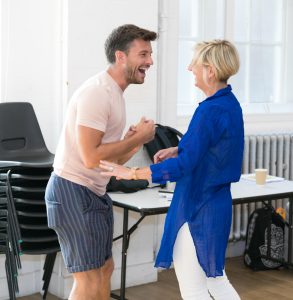 When we asked Sondheim if we could adapt Company in this way, he said he would only allow it if we felt that it genuinely has something to say about what it is to be a woman today. When he saw what we were doing, he said ‘yes.’

There is also a very current conversation in the media about the pressure on women in their 30s to ‘settle down and get married.’ A recent article with Jennifer Aniston caused much attention when people questioned why this hugely successful woman was being labelled as ‘sad’ simply because she didn’t have a husband! This production asks all these questions.

Did you bring the idea to Elliott and then flesh it out with her? What was her first reaction?

When I first suggested it to Marianne, she wasn’t sure. But then she spent some time looking at the script. Later, she called me to say that she thought it might work. In many ways, the workshop was for Marianne to discover if the idea really worked and wasn’t just a gimmick. She wanted to really test the script with the new dynamic in the re-gendered relationships. Marianne is forensic in the way she approaches each project and it is all about the detail.

We knew at the workshop that we were really onto something exciting and the excitement Marianne felt for the production has escalated since then. Finally, over two years later, she is in the rehearsal room with this incredible cast and we can’t wait to share it.

Did you and Elliott bring the idea to Sondheim together? What was his reaction?

Marianne met Stephen Sondheim a number of times and met up specifically to talk about our idea for Company. He was a little skeptical to begin with, but out of respect for Marianne, he asked her to do a workshop and then he would decide. It was by no means a slam-dunk.

Sondheim wasn’t able to attend the showing at the end of the workshop, so we filmed it and sent it to him. In fact, the young guy who filmed it for us said how much he loved it and he asked us if it was a new musical. When we told him it was written in the 1970s and Bobby was usually played by a man, he said he couldn’t imagine how that would work! Sondheim heard this story and thought that was very funny.

He watched the recording with a group of friends at his house and gave us his blessing straight away. He has been totally engaged with the idea ever since. 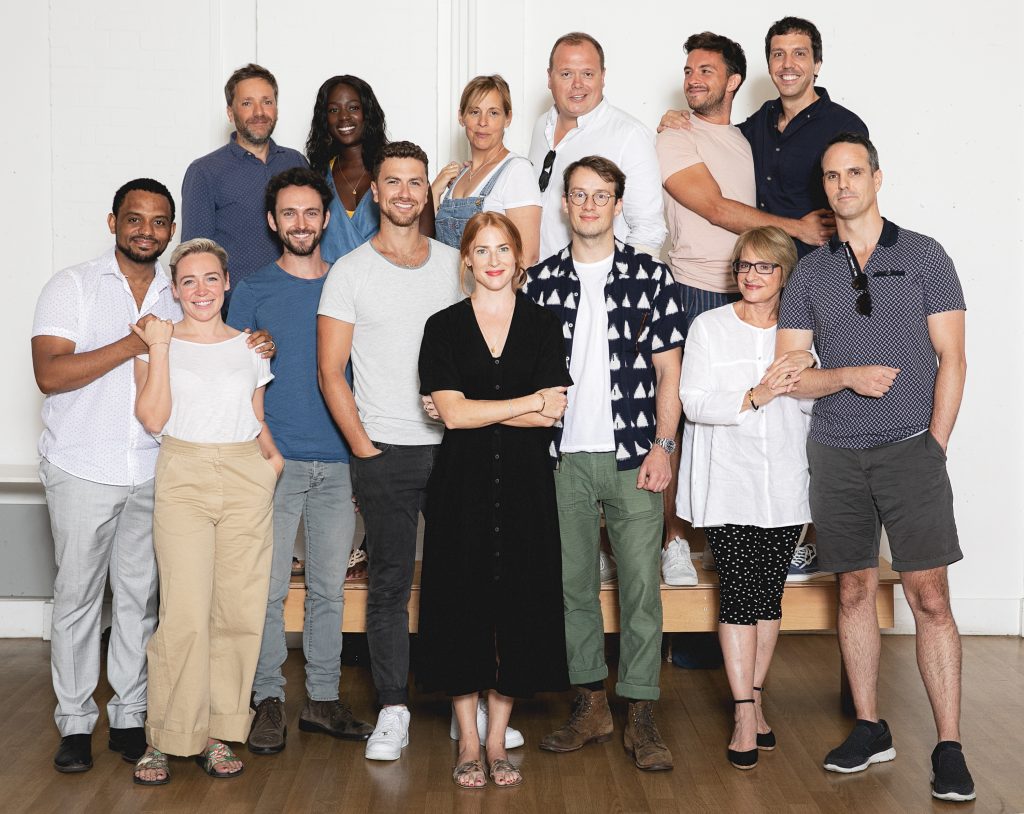 The cast of Company. Photo by Darren Bell

What changes were necessary to the script to create this production?

Sondheim has made lyric changes to reflect the gender swaps and also to update some of the references from the 1970s that no longer apply. This production is very much set ‘now.’

As for the ‘book,’ we have been very faithful to the original script by George Furth. His estate gave us access to all of George’s papers, so we have had the opportunity to look at all the early drafts of the script, right back to the original sketches on which the show was based.

What did you look for in actors to take the newly crafted roles?

We have the most amazing group of actors headed by Rosalie Craig as Bobbie and Patti LuPone as Joanne. We wanted strong women who reflect the world we are living in. Their relationship is key to the production. But we also wanted to reflect the diversity and sexuality of a cross-section of ‘thirty-somethings’ living in modern Manhattan. The show needs to feel current. Jonathan Bailey takes on the role of Jamie (formerly Amy) and will sing ‘Getting Married Today.’

Do you see similar adaptations for other Sondheim works?

The writing is so strong that I am sure people will always be wanting to do his work in lots of ways. 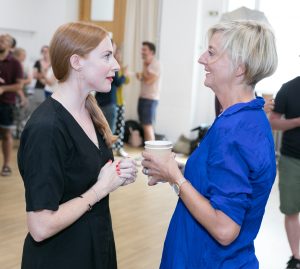 What do you think of the idea of gender changing in Company? How does that affect the piece’s themes/impact?

The first thing to say is that by changing the gender of the central character of a man called Bobby to a woman called Bobbie, it’s bringing the show completely up to date. It’s modernized the piece in a really exiting way. Because Bobbie is a 35-year-old woman, the very essence of the role has changed. We are looking at issues of having a career and a successful life in your mid-30s, and the pressure from those around us to get married, have babies and settle down.

How does casting Bobbie as a female change that role? Have you seen the performances of men in the original role?

I have seen men in the role before, and I was previously in a production at the Sheffield Crucible, directed by Daniel Evans. So, I know the musical from the inside and from the male perspective. It’s a brilliant advantage for me to know it from that side, and it really highlights how what we are doing seems so right. Last time I played Marta – who in our production is now a man called PJ. I’m in rehearsals now and I just can’t remember Bobbie being a man anymore. It doesn’t feel that I’m putting a square peg in a round hole. The jigsaw fits together beautifully.

Are you a fan of Sondheim, or of this work in particular? Have you done any of his shows before? 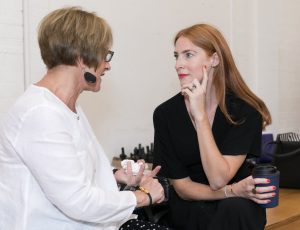 Yes, I’m a huge, huge fan of Sondheim. I have been since I was introduced to him at drama school. He’s simply incomparable. I’ve done lots of his work, including Anyone Can Whistle, Sweeney Todd, Company, Side by Side by Sondheim, and lots of songs and concerts. Company and Into the Woods are my two favourite pieces. Never did I dream that I would have the opportunity to play Bobbie. It’s just a dream come true. I’m extraordinarily lucky.

What do you like most about Company — original or updated? Do you have a favorite musical number?

‘Being Alive’ is my absolutely favourite musical number — the sentiment and the lyrics and the music. Stephen Sondheim has an honesty to his music and his lyrics that isn’t present in any other work I’ve come across. He’s written a song about whether you want to be married or be with someone, and the lyrics are talking about some of the negative aspects of a relationship – somebody held me too close, somebody hurt me too deep, somebody needs me too much. All the things that are in a relationship that no-one talks about. Sondheim puts them in his music and lyrics and we identify with them. It’s not a frilly song about love; it’s about the reality of love and relationships.

Ellyn Wexler is the executive editor of CultureSpotMC.com,  the Arts & Humanities Council of Montgomery County’s weekly online arts magazine, and writes book reviews and articles about arts, community events and businesses for The Town Courier newspaper. She spent 25 years on the staff of the now-defunct community newspaper, The Gazette, predominantly as Features Editor, covering arts and entertainment in Montgomery, Prince George’s and Frederick counties in print and online.